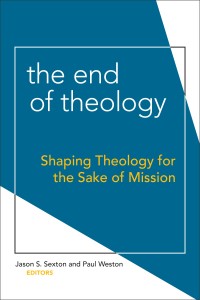 There is an important ambiguity that attends the philosophical use of the term “end.” On the one hand, it can mean the termination of something (terminus). On the other hand, it can also mean the aim, goal, orientation, or purpose of something (telos). Whereas the terminus names the point of cessation for something, the telos, to some degree, names its projected essence.

With this conceptual background in mind, when I received the invitation to review the new edited volume by Jason S. Sexton and Paul Weston entitled The End of Theology, I fully expected that it would play on this ambiguity occurring in the term “end.” Indeed, the subtitle seems to anticipate this very dynamism: “Shaping Theology for the Sake of Mission.” Surely, I thought, the point of the text would be to show that theology as currently practiced needs to come to some sort of “end” (terminus) in order to return to its appropriate missional “end” (telos). However, I was surprised to discover throughout the volume that really the only notion of “end” in play was in the sense of telos. Although there are important questions to ask about this teleological framing, they primarily emerge when we restore the ambiguity to the “end” in the title.

In the introduction to the volume, Sexton and Weston write that “theologians and missiologists do not often talk to each other.” On the face of it, this might seem strange since engaging in the practice of Christian mission (whether as a practitioner or as an academic who is focused on such practice as the object of her study), would appear to require a developed theology as the motivation of the missional commitment. We might say that a theology—an account of who God is (theo-logos)—is the background condition for any missiology that then would be understood as itself being a theological task. Indeed, in this way mission can be the “end” (telos) of theology, only when theology is the beginning (archē) of missiology. This is an important realization because if Aristotle is right about the way in which teleology works, then the end always lies in the beginning and beginning only signifies as such in relation to the end. Accordingly, appropriately understanding theology as missionally directed is required in order to understand missiology as the proper goal of theology. Although this might initially seem either tautological or circular, it is neither. It is possible to understand theology as a practice without there every being a missional dimension of that theological task.

Similarly, it is possible to understand mission as important for lots of cultural activities, without ever requiring that mission to be theologically grounded—e.g., the “mission” trips that are now popular at secular universities. Being “on mission” is increasingly understood as merely a matter of being intentional about one’s vocation in relation to the status of others. So while, on the one hand, theology might simply be an intellectual practice of careful reflection on such concepts as “God,” “divinity,” “transcendence,” “faith,” or “worship,” which have traditionally been termed “religious,” on the other hand, one could be committed to the mission of social justice, the mission of fostering democratic engagement, or the mission to care for underserved populations, etc., without ever invoking such “religious” frameworks or terminology.

As I understand it, the shared hope of the contributors to this volume is that theology will be viewed as a lived practice of understanding oneself and one’s world in light of a conception of an incarnate, personal, and relational God. Such a kenotic theology is, from the beginning, missional in its orientation and moral imperative. Were we to begin with a different conception of God as an impersonal, distant, and strict ruler, say, then such a missional commitment might never be motivated. In fact, a missional response characterized by a concern for the “least of these” might even be understood as a critical rejection of such a theological account. Part of what unites all the essays in this volume is the commitment to a theology of dis-possession such that egoism would stand immediately as idolatry. The missional commitments that they all share are motivated by a basic underlying agreement regarding the divine personality as itself relationally defined.

Importantly, we must be careful not to allow the direction of influence only to run in one direction. The archē opens us toward a specific telos, but only when we understand that telos can we rightly appreciate the functioning of the archē. In other words, even if an initial theology underlies all missional directives that would operate in the name of that particular account of God, missional practice should inform and reshape that theology. In epistemic terms, we might say that Christian theology operates according to a modest foundationalist framework. There are basic beliefs that serve as the condition for justifying our actions, and beliefs about those actions, but the actions in which we engage and the beliefs that result from them, subsequently serve then to challenge our basic beliefs.

Theology is rightly understood as foundational for missional life, but it is also revisable in light of our experience of living it. Doxastic commitments frequently serve as reasons to live a particular way, but far too often they then become unquestioned as obviously offering the only way to live. When our foundations are held modestly, then we can be properly motivated while also avoiding the idolatry of caring more about protecting our theological claims than we do about loving God. Another way to make this point is to present it as a hermeneutic thesis. No beliefs are held, and no actions are undertaken, outside of a linguistic, social, cultural, historical, and embodied context. Such hermeneutic contexts are inescapable, yet they are also never necessary in any particular determinate formulation. Contexts are themselves contextual.1

In this regard, Sexton and Weston appreciate that our theological commitments should motivate a lived missional practice, which in turn should cause us to interrogate our latent theological assumptions (Sexton and Weston 2016, xxvii). To that, I simply say, “Amen.” And yet, just as co-signing the sermon on a Sunday ought not to be the totality of one’s Christian witness, perhaps my “Amen” here should be more of an “Amen, but . . .”

Although I am deeply appreciative of the way in which the contributors to this volume all seek to resist the calcification of Christian theology that can occur when it forgets to engage a broader cultural context, and thereby they all seem to appreciate the back-and-forth of theology and missiology, I worry that the “for the sake of” announced in the subtitle itself risks becoming calcified if we fail to appreciate the “end” (terminus) of theology that it might require. This danger shows up at various spots in the volume when the contributors call for hermeneutic openness, cultural humility, dialogical hospitality, ecclesial awareness, etc., but then stop short of explicitly challenging the traditional or commonplace practice of theology and missiology that would fail to foster such virtues.

For example, in the introduction, Sexton and Weston rightly note that “in spite of strong and various impulses calling us to fear others, we are called, instead, to labor with the desire to see others flourish alongside members of our own ecclesial communities, to pursue a vision of radical hospitality and vulnerability.” Yet, despite such a noble hope, it is unclear to me that the volume as a whole performs the critical interrogation that is required in order that the missional “end” (telos) of theology bring about the “end” (terminus) of so much of contemporary (specifically evangelical) theology that works against this purpose. In other words, what our mission should be, is itself a theological question. To act as if our theology is stable enough to allow for a particular missional vision to be assumed is mistakenly to think that the foundations upon which we build are never affected by the structure placed upon them.

Throughout the volume, the theological foundations articulated as the condition for mission are not presented as revisable and modest, but instead as absolute and “nonnegotiable” (Sexton and Weston 2016, xxiii). This move ends up threatening to replace the dynamic and destabilizing performance of the relationship between beginning and end with not much more than a practice of playing at the edges of what is already taken as stable. In such a situation, potential doxastic idolatry looms large as a danger. Accordingly, the book is less compelling than it needs to be because it is far less radical than its own articulated task demands.

So long as a classical foundationalism is in place, rather than a modest notion of revisable basic beliefs, we are unlikely to be open to true self-criticism. So long as a modernist approach to nonnegotiable theological truth operates instead of a postmodern appreciation of the hermeneutic necessity of epistemic humility, we are unlikely to be transformed by the missional theology that we advocate. So long as Scripture is allowed to stand as providing obvious truths about God such that we, “of course,” know how to live such truths out in the world, we are unlikely to find the theological fortitude required to speak risky truth to stable power, especially when those powers are the largely evangelical sub-culture promoting such foundationalism, modernism, and troubling Biblicism as simply the absolute Truth (always with a capital-T) of Christianity itself.

This book is important in a lot of ways, but it is most important for highlighting what is needed in order for the book to be even better. When we confront the “ends” of theology, we should run up against the “ends” of ourselves. This book invites such a confrontation, but does not pursue it explicitly. Perhaps, then, this book’s “end” (terminus) calls for us to consider what it means to live toward the “end” (telos) it promotes. As such, there remains a lot of work for us all to do—whether we are philosophers, theologians, missiologists, practitioners, or whatever. So, in light of the ends of theology, may we understand, finally, how to begin to live missionally.

J. Aaron Simmons is an associate professor of philosophy at Furman University. Specializing in philosophy of religion and political philosophy, Simmons is the author of God and the Other (Indiana UP, 2011), co-author of The New Phenomenology (Bloomsbury, 2013), and co-editor of numerous other books including, most recently, Phenomenology for the 21st Century (Palgrave, 2016). He is co-host of the blog “Philosophy Goes to Church.”