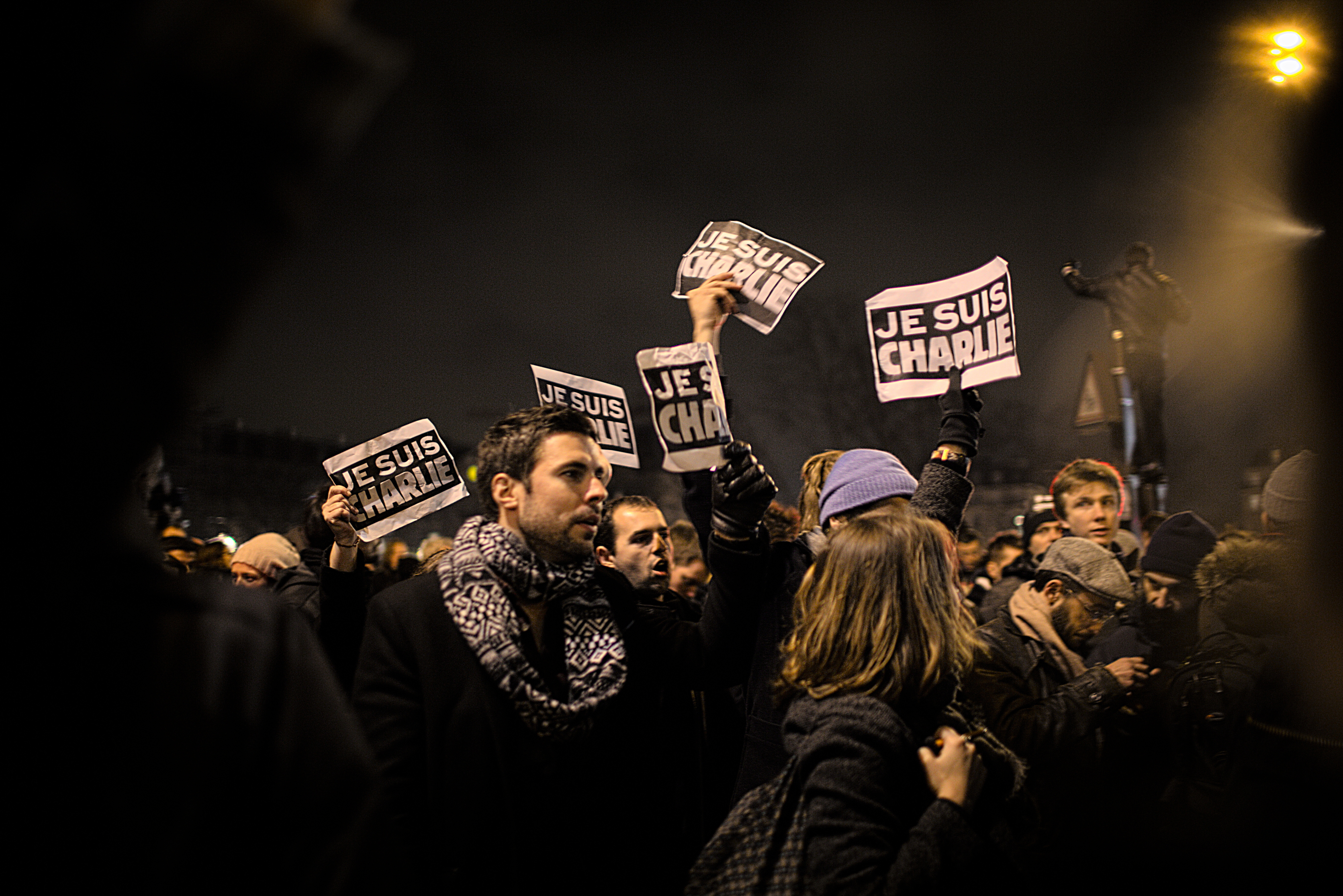 On Wednesday, January 7th, two masked assailants stormed the Paris headquarters of the French satirical publication Charlie Hebdo, killed 12 people, and wounded 11 others. Police quickly identified 3 suspects—the shooters and a suspected getaway driver. The following day, in a suburb of Paris, a masked gunman (later linked to the brothers suspected of carrying out the magazine massacre) fatally shot a policewoman. By Friday, all three gunmen had been killed in separate hostage situations, and al-Qaeda in the Arabian Peninsula had claimed responsibility for the attacks, saying that they were intended to teach the French “that the freedom of expression has limits and boundaries.”

Ideally, it would never require great courage and commitment to make puerile doodles mocking those whom one perceives to be making a mockery of the things that they purport to hold sacred. But those dead French cartoonists were braver by far than most of us in going up against the deadly foes of our civilization, armed only with a great talent for bilious ridicule. On any given day, we might have scoffed at the seeming crudeness of their jokes, rather than laughing at their jokes on crudity. But the killers proved the cartoonists’ point with ghastly finality: theirs was a necessary, freedom-sustaining, and therefore life-giving, form of defiance. Without it, they knew, we—humankind—are less.

At New York Magazine, Jonathan Chait writes what he sees as the hypocrisy of many who defend “the right to commit blasphemy“:

On the one hand, religious extremists should not threaten people who offend their beliefs. On the other hand, nobody should offend their beliefs. The right to blasphemy should exist but only in theory. They do not believe religious extremists should be able to impose censorship by issuing threats, but given the existence of those threats, the rest of us should have the good sense not to risk triggering them.

The right to blaspheme religion is one of the most elemental exercises of political liberalism. One cannot defend the right without defending the practice.

On a similar note, Emma-Kate Symons, at Quartz, writes:

There can be no compromising on freedom of speech. For the killers there is no compromise.

Now, all we can do is say #JeSuisCharlie.

However, David Brooks has suggested that “it is inaccurate for most of us to claim, Je Suis Charlie Hebdo, or I Am Charlie Hebdo,” since “most of us don’t actually engage in the sort of deliberately offensive humor that that newspaper specializes in.” Still others, like Teju Cole, emphasize that “it is possible to defend the right to obscene and racist speech without promoting or sponsoring the content of that speech,” and call attention to other threats to the freedom of expression.

The Charlie Hebdo cartoonists were not mere gadflies, not simple martyrs to the right to offend: they were ideologues. Just because one condemns their brutal murders doesn’t mean one must condone their ideology.

Rather than posit that the Paris attacks are the moment of crisis in free speech—as so many commentators have done—it is necessary to understand that free speech and other expressions of liberté are already in crisis in Western societies; the crisis was not precipitated by three deranged gunmen. The U.S., for example, has consolidated its traditional monopoly on extreme violence, and, in the era of big data, has also hoarded information about its deployment of that violence. There are harsh consequences for those who interrogate this monopoly. The only person in prison for the C.I.A.’s abominable torture regime is John Kiriakou, the whistle-blower. Edward Snowden is a hunted man for divulging information about mass surveillance. Chelsea Manning is serving a thirty-five-year sentence for her role in WikiLeaks. They, too, are blasphemers, but they have not been universally valorized, as have the cartoonists of Charlie Hebdo.

The killings in Paris were an appalling offense to human life and dignity. The enormity of these crimes will shock us all for a long time. But the suggestion that violence by self-proclaimed Jihadists is the only threat to liberty in Western societies ignores other, often more immediate and intimate, dangers. The U.S., the U.K., and France approach statecraft in different ways, but they are allies in a certain vision of the world, and one important thing they share is an expectation of proper respect for Western secular religion. Heresies against state power are monitored and punished. People have been arrested for making anti-military or anti-police comments on social media in the U.K. Mass surveillance has had a chilling effect on journalism and on the practice of the law in the U.S. Meanwhile, the armed forces and intelligence agencies in these countries demand, and generally receive, unwavering support from their citizens. When they commit torture or war crimes, no matter how illegal or depraved, there is little expectation of a full accounting or of the prosecution of the parties responsible.

In the midst of these debates, and the anti-Muslim violence that has followed the shootings, Dilshad Ali, writing at Patheos, gives voice to the frustration of trying to live “lives as good Muslims, good humans,” while attacks like the one on Charlie Hebdo are committed in the name of Islam:

There are so many of us trying so hard to just live our lives as good Muslims, good humans, the way our faith teaches us, the way we learned from the example of the Prophet Muhammad. Peacefully, lovingly, faithfully. In the coming days there will be a rush to opine on the tragedy in Paris, to send prayers, to make the same arguments made a thousand times before, to condemn, to be silent in our sorrow (which doesn’t mean that we don’t condemn), to be vocal in our outrage.

Even now I’m wondering what good there is in writing this, in throwing this out there into the cacophony of screaming voices. Better live my life like I’ve always done – with as much dignity, class, faith, joy and even-handedness as possible. Raise my kids, help my eldest son manage his autism as best possible, be a good mother, wife, daughter, sister, friend, human. Be a living example as best possible for what I know to be good and true. Pray for those whose lives were so violently snuffed out, pray for God’s mercy, pray for His justice to be rained down on those who commit such horrors, pray for humanity.

On Sunday night, millions in Paris and other cities around the world rallied in a show of unity.