With Cantor loss, only Christian Republicans in Congress 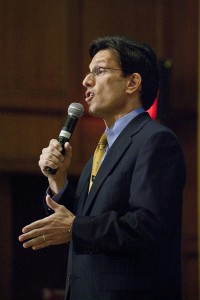 The unexpected primary defeat of Virginia Representative and House Majority Leader Eric Cantor on Tuesday is already having seismic effects on the Republican leadership and Congress as a whole. (Cantor has just announced he’ll step down from the Majority Leader post, prompting an immediate effort to reorganize.) But Cantor’s exit will also likely prove an interesting demographic marker for the 114th Congress. The Representative, who is Jewish, is the only non-Christian Republican on the Hill. As Aaron Blake pointed out over at the Washington Post, it looks like Republican Christian dominance will soon be complete:

According to data collected by the Pew Forum at the start of the 113th Congress last year, the GOP conference was 69 percent Protestant, 25 percent Catholic, 4 percent Mormon and 1 percent Orthodox Christian.

Cantor (Va.) was the only member of any other faith on the Republican side in either the House or the Senate — out of 278 members. There are no non-religious Republicans in Congress either.

That last statistic represents a stark departure from the preferences of the nation as a whole. According to the Pew data, “about one-in-five U.S. adults describe themselves as atheist, agnostic or ‘nothing in particular.’”

The Democratic delegation is much more religiously diverse—including 32 Jewish members, three Buddhists, two Muslims, a Unitarian Universalist, a Hindu, an “unaffiliated” member, and 10 delegates who didn’t specify any particular denomination.

The primary loss dashes Cantor’s dreams of becoming the first Jewish Speaker of the House. As Michelle Boorstein reports in The Washington Post, Jewish figures in both parties are reacting to his defeat with some disappointment:

Much of Cantor’s conservative domestic politics are anathema to Jews, 70 percent of whom say they are Democrats or lean that way. But he played a unique role by advocating in the areas where many Jews are more conservative, particularly around the security of Israel and in public support for Jewish institutions.

“The partisan in me can’t help but be amused,” said Steve Rabinowitz, a Democratic media strategist who worked in Bill Clinton’s White House and now serves many Jewish organizations. “But the Jewish communal professional in me thinks it’s not a good thing for the community.”

Read more The Immanent Frame coverage on religion in Congress here, and check out Blake’s and Boorstein’s pieces over at the Post.