Reverberations of cognition and culture 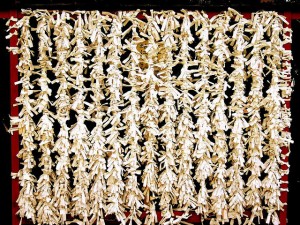 A lively interdisciplinary discussion about cognition and culture has emerged from Reverberations, the new digital forum on prayer produced in conjunction with the SSRC’s New Directions in the Study of Prayer (NDSP) initiative. The NDSP grantees share their thoughts about the study of prayer, interdisciplinary methodologies, and the nature and complexities of their research.

Dive into Cognition and Culture, At it Again! with Charles Hirschkind’s inaugural essay, an imagined dialogue—or rather, a debate—between Ms. Social-Cultural and Mr. Cognitive as they wrestle with the question, “Does the study of prayer allow us to say anything interesting about universal human attributes or faculties?” The flurry of responses include Rebekah Richert’s interjection from Ms. Socio-Cultural-Cognitive, Paul Bloom’s piece about what evolutionary psychologists and cultural anthropologists can learn from each other, and Sonja Luehrmann’s “A Letter from Mr. and Mrs. Historian.”

Follow the conversation further with John Modern who adds a Romantic Poet to the mix of colorful characters, and Stephen Teiser who wonders how historical definitions and considerations of prayer can benefit their research. On the limitations of academic disciplinary habits, Kevin Ladd encourages the practice of breaking out of intellectual silos and Robert Orsi locates academic walls as the best places to discover new knowledge.

Fareen Parvez continues the discussion by questioning the tendency to search for universalisms while Mark Aveyard offers a critique of interdisciplinary initiatives and ways in which it might be improved. Shira Gabriel shares what she has learned from interdisciplinary efforts, and Christine Wicker gives a closing cheer for Thomas Kuhn.