Allison Kaplan Sommer and Dahlia Lithwick write at The New Republic write about the struggles of an emergent form of feminist protest among Modern Orthodox Jewish women in an Israeli city. The article profiles a struggle against the unofficial gender segregation that these women are sometimes pressured to comply with: 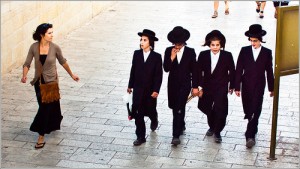 After an influx of Haredi families had poured into the city in search of affordable housing, official-looking posters cautioning women to “dress modestly” had appeared around town. Signs were now posted near Haredi synagogues ordering women not to “linger” or make noise. When she went on runs, the five-foot-tall Philipp wore her long skirt and head scarf. But despite her modest dress, on several occasions, Haredi men had cursed her and spat on her, perceiving the mere sight of a woman running as offensive to their beliefs. When she went biking, Philipp had tried wearing a skirt, but when doing so proved neither practical nor safe she switched to knee-length shorts—the longest she could find—and a short-sleeved jersey.

Bowing to pressure from politically influential Haredi rabbis, secular male authorities have also acceded to bans on women’s faces on billboards in some ultra-Orthodox neighborhoods, gender-separated office hours in government- funded medical clinics, and de facto gender segregation on publicly subsidized buses. Women have been discouraged, and at times even prohibited, from participating in some official ceremonies. In short, restrictions that once affected only Haredi women are spilling into public spaces, affecting all women, and calling into question the justness of a model that allows gender equality to be a negotiable issue.