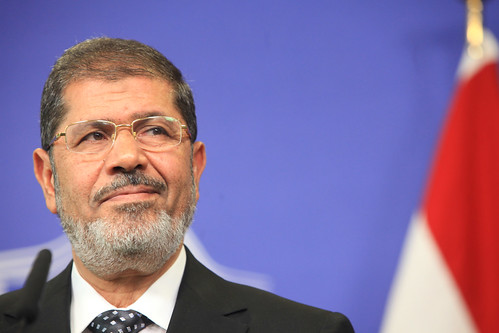 On November 21st, an Egyptian-sponsored ceasefire between Israel and Hamas took effect, bringing an end to eight days of particularly fierce fighting between the two. The newly elected Islamist government, led by President Mohamed Morsi, would also play a key role in maintaining the peace in the region, leading U.S. Secretary of State Hillary Rodham Clinton to remark: “Egypt’s new government is assuming the responsibility and leadership that has long made this country a cornerstone of regional stability and peace.” Indeed, around the same time, Egypt reached a preliminary agreement with the International Monetary Fund (IMF) for a much needed 4.8 billion dollar loan, in the hopes of boosting investor confidence, and invite more aid. Both actions help earn Morsi and the government high praise, as well as reaffirm Egypt’s importance on the international stage.

The next day, November 22nd, Morsi issued a stunning constitutional declaration, meant “to protect the revolution,” that granted new and extrajudicial powers to Egypt’s People’s Assembly and himself, immediately triggering demonstrations and protests, as well as counter rallies, throughout the nation. At The Guardian, Peter Beaumont writes:

ElBaradei accused Morsi on Twitter of having “usurped all state powers and appointed himself Egypt’s new pharaoh”.

“This is unacceptable, Morsi is preventing the judiciary from doing its job,” Emad Gad, political analyst and member of the Egyptian Social Democratic party, told al-Ahram.

While some commentators have recognised the new powers appear to be aimed at removing the obstacle of a judiciary still dominated by remnants of the Mubarak era who have undermined progress towards a constitution, they are also alarmed by the decree.

In particular, critics point to Article 6, which states that the “president may take the necessary actions and measures to protect the country and the goals of the revolution” and places the president as the sovereign of the state, as he can “claim exception against all rules”.

Some compared it to Anwar Sadat’s use of a similar measure in 1979 that was used against opposition figures.

The resulting draft constitution, approved by the Assembly on November 30th, was not without controversy, in particular articles that made reference to Islamic thought. Clark Lombardi and Nathan J. Brown take a close look at this issue at Foreign Policy, explaining:

Article 219 provides firm evidence, if any was needed, that there were many Islamists in the room when this document was drafted. But the clause was not simply a result of their imposing their will. Instead a far more complex process was at work, with Islamists of different stripes and non-Islamists wrangling over the religious provisions. Brotherhood members of the Constituent Assembly insist that they were not behind this language and indeed that it was non-Islamists who pushed al-Ahzar into the document. There is reason to give some credence to some of these claims: the drafting process may have played into Brotherhood hands, but on these issues there was no need for them to be heavy-handed.

The wording was the product of intense bargaining inside and outside of the 2012 Constituent Assembly. The assembly was able to develop a consensus adopting the old wording of Article 2 for the new document. But when they abandoned attempts to tinker with it, they set off contests over defining the principles of sharia principles.

And so an odd compromise developed. Those with little stake in the outcome won the most; the two most antagonistic parties (in political terms — Salafis and non-Islamists) took strong positions but had to compromise. Article 219 adopts neo-traditionalist language. Salafis had to content themselves with the assurance that Article 2’s principles were at least being nailed down in some ways, even if it was done in a manner overly deferential to the scholarly tradition. And non-Islamists had to content themselves that if the Islamic sharia’s principles were being defined, at least they were not being handed to Salafis. In their terms, they might be saddled with a bit too much medieval thinking but at least they were not brought back to the seventh century

In the center of the firestorm is Mohamed Morsi himself, who in the face of heavy, and sometimes violent, opposition, not only rescinded his controversial decree from last month, but also scrapped plans to increase taxes, putting the entire IMF loan at risk. Over at The New Republic, Joshua Hammer comments on Morsi’s enigmatic persona, who “can seem like the inspiring guardian of Egyptian democracy—such as when he courageously dismissed the military junta that had claimed the right to rule post–Hosni Mubarak Egypt. At other times, he can seem like a mouthpiece for the deeply conservative Muslim Brotherhood—declaring women unfit for high office and advocating for an international law to ban religious insults.” Others have questioned his decision-making abilities; while a a “good listener,” Morsi faces multiple dilemmas, not the least of which is the division between Islamists and non-Islamists within his own government. At the core of this debate is the nature of political legitimacy, as Richard Falk notes:

…with Islamists resting their claims on the will of the majority, what in the American 18th century context was derided as ‘the tyranny of the majority’,  while the opposition insists on stakeholder democracy that is protective of distinct constituencies that are fearful of each other and of a Sharia Egypt; in this light, both sides seem uncompromising, and resting their encounter on contradictory views of democratic legitimacy.

The worldwide constitutional referendum will be held on December 15th and December 22nd. With many judges promising to boycott the referendum, not to mention alternative constitutions already being proposed, stability and legitimacy may come later than expected.