A new theory on political wounds 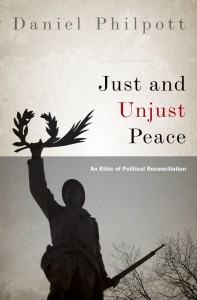 Daniel Philpott has written an impressive book that offers a new conception of political reconciliation for the field of transitional justice.

The meaning of political reconciliation for Philpott centers on what he calls the “restoration of right relationship.” When a society emerges out of war or dictatorship, it is full of wounded relationships: among citizens, among communities, and between the state and its citizens and communities. These wounds are created by political injustices, the particular sort of injustices that transitional justice, at its best, seeks to address. Philpott argues that an effective conception of political reconciliation must address such injustices, and he roots his conception in a mix of religious and legal doctrines and traditions: human rights, restorative justice, Judaism, Christianity, and Islam. He offers a conception of transitional justice that goes well beyond the liberal peace.

Philpott’s project is to find the points of commonality between these traditions. Some scholars see Islamic notions of punishment as antithetical to human rights, or Christian notions of forgiveness as antithetical to punishment, or restorative justice as antithetical to the prevailing penalistic account of transitional justice. Philpott offers a different point of view, one that acknowledges the tensions within and between these traditions, but that ultimately highlights how—in relation to political injustices—each of them is geared toward righting relationships that have been wounded. He also shows how the liberal and religious transitional-justice vocabularies are fundamentally convergent. The former uses terms like civic trust and social capital, and the latter terms like harmony and reconciliation, but for all intents and purposes they focus on the common end-game that Philpott calls “right relationship.”

I believe that Philpott gets it right by viewing transitions out of war and dictatorship as being simultaneously, and fundamentally, about the treatment of wounds and the restoration of relationships. Societies in transition require fixes that go far beyond the technical or individual levels. They are societies broken on moral, legal, and political levels, perhaps even on spiritual levels. Whole new relationships need to be reimagined, reconstructed, and reconfigured. This is the most important priority in achieving the kind of beyond-liberal “just peace” that Philpott refers to in the title of his book. And it is clear that Philpott sees transitional justice as an integral part of the exercise because of its capacity to transform the human and institutional relationships that are the basis for any stable society. As he states in the book: “One of the most important goals of practices of political reconciliation is to change the judgments that people form in response to political injustices….” (46).

In addition to offering a coherent framework for his ideas, Philpott introduces a number of memorable terms, such as “overlapping consensus,” “rooted reason,” “personalism,” and the “standing victory of the perpetrator’s injustice.” The latter is of particular interest. Philpott uses this to express the idea that right relationship (i.e., political reconciliation) cannot be achieved as long as there is a perception of political injustice. This leads him to embrace rather than reject punishment and atrocity trials as part of his overall theory. But his embrace is not a maximalist one: he favors a “presumption of punishment” but contests the assertion that punishment and atrocity trials can never give way to competing priorities. I share this view, which is a rational one if you start from the premise that successful transitions may in some cases require principled suspensions of criminal justice.

However, while I am in broad agreement with Philpott’s argument, let me also express some reservations.

First, I believe that the book may hold limited value for the transitional justice practitioner. The debates that it summarizes, and the case studies and examples cited, are not sufficiently new or original. They will be familiar, with the smallest of exceptions, to anyone knowledgeable about the core transitional justice literature of the last fifteen years. For example, Philpott makes reference throughout the book to major experiences of the field in the 1990s, such as those of Germany, Chile, South Africa, and Rwanda. Yet there is hardly any reference to the more complicated and well-covered cases that dominated the last decade of transitional justice discourse and practice, such as Sudan, the Democratic Republic of Congo, Iraq, Afghanistan, and Colombia. This gap leaves the book feeling somewhat dated and, however unintentionally, cherry-picked. It is even a greater shame that the book, despite being published in 2012, makes no reference to the Arab world’s revolutions and transitions, which have special relevance for a theoretical framework that seeks to reconcile Islam with a universalist rights-based account of political reconciliation.

Another reservation I have about Philpott’s book has to do with a feeling of “overreach.” In advancing an all-encompassing theory of political reconciliation that seeks to synergize traditions as diverse as human rights, restorative justice, Judaism, Christianity, and Islam, Philpott sometimes needs to stretch the ordinary meaning of certain terms in order to make them fit his theory—for example, by arguing that justice and political reconciliation, following his philosophical dissection, are one and the same. This kind of stretching of terms and traditions feels overwrought at times, giving the occasional sense that the book is as much a work of word-smithing as one of ideas. This is an understandable consequence of trying to advance a theory that will find agreement on every side of a multifaceted argument.

Finally, as much as I agree with the book’s substantive content, there are a few points with which I disagree. For example, Philpott boldly argues toward the end of his treatise that forgiveness of the perpetrator by the victim is necessary in order to fully overcome the standing victory of a perpetrator’s injustice. This is one of the only unconvincing, and arguably unnecessary, parts of his otherwise compelling treatise. He simply does not make the case convincingly enough that political reconciliation is incomplete without forgiveness. Other minor quibbles I could note are of less consequence to his overall thesis. For example, there is very little discussion about vetting—a crucial tool for righting the state-society relationship—and what little discussion he includes is oddly located under the section on punishment rather than the one on “building socially just institutions.” Similarly, Philpott’s treatment of apology as an entirely separate section from the one on reparations is surprising, as is his treatment of amnesty, which he mistakenly describes as a subcategory of pardon rather than the reverse and which he oddly locates within the section on punishment rather than on forgiveness.

Ultimately, though, I cannot but admire the ambition of Philpott’s book and the sheer breadth of topics it covers. His formulation of “political reconciliation” is generally convincing and in time may come to influence transitional justice theory and terminology. His more integrated approach to the issues is one that ought to be widely endorsed, especially in a time when the theory and practice of transitional justice have become counter-productively and illogically synonymous with the fight against impunity.

Mark Freeman is the Executive Director of the Institute for Integrated Transitions. A Belgian and Canadian citizen, he is an international lawyer and leading expert on human rights issues in contexts of democratic and postconflict transition. Mark helped launch and direct the International Center for Transitional Justice, in New York and in Brussels, and is the author of Necessary Evils: Amnesties and the Search for Justice (Cambridge University Press, 2010) and Truth Commissions and Procedural Fairness (Cambridge University Press, 2006), which received the American Society of International Law's highest award.