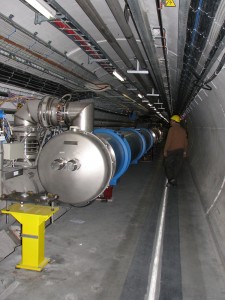 One of the most exciting scientific discoveries in human history occurred earlier last week with the long-awaited confirmation of the existence of the Higgs boson (or Higgs particle) by scientists at the European Organization for Nuclear Research (CERN). This discovery should enable scientists to better piece together what happened just after the Big Bang—in particular, how energy was given mass. Of course, its nickname “the God particle” draws attention to the way in which the Higgs boson provides evidence for the role of natural processes in the evolution of the universe, processes that do not require the supernatural explanations for creation that human beings have long relied on to explain our existence. Of course, the Higgs boson neither proves nor disproves God’s existence: it merely demonstrates that God is not necessary for the processes which gave mass to all that exists.

How are religious people responding to this discovery? As with anything, they are responding in a multitude of ways, from excitement and acceptance of the findings to anger and rejection of scientific epistemology. Perhaps some of the more interesting reactions can be viewed on Twitter, where some believers, largely Christians it appears, have been reacting to the discovery in two primary ways: either as irrelevant because scripture supposedly already told us all we need to know about the world, or as evidence that God does in fact exist.

The owner of the Twitter feed claims to have started the feed in order to draw out fundamentalist responses to the discovery, which s/he supposes will be “crazy.” Tweets on the feed include: “what a blessing that #science has finally discovered the God particle. now the #atheists have no excuses for their denial of Jesus Christ!”; “it was named the God Particle by scientists, I don’t see how this could be anything but proof God is real”; and finally, “The God Particle #Higgs in scripture: “In Him all things hold together.” Colossians 1:17.” After reading through the feed, what is most interesting about these responses is not whether or not the people writing them are indeed crazy. Instead, it is compelling to note the degree to which people appear to lack any actual knowledge about the scientific discovery, how it was arrived at, or what the phrase “the God particle” itself was meant to convey. Perhaps this ignorance of scientific methods and findings is unsurprising, but it is still troubling.

Even more interesting is the process by which people respond by incorporating their new, though very superficial knowledge about the Higgs boson into their existing religious frameworks. Unlike what people like Richard Dawkins might expect, scientific discoveries like these do not necessarily challenge faith because, as examples like this remind us, humans are skilled at re-interpreting knowledge through their own existing frameworks—as in, applying an empirical discovery to a scriptural passage written in a completely different context. And this skill, of course, is not limited to religious people. For more, read: https://twitter.com/derpparticle