The end of postcolonialism 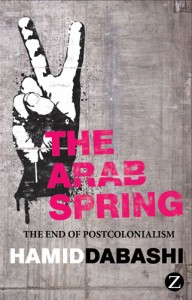 The London-based publisher Zed Books recently released Hamid Dabashi’s The Arab Spring: The End of Postcolonialism (distributed in the U.S. by Macmillan). The book is excerpted on AlJazeera.com:

The world keeps discovering, keeps inventing, keeps overcoming itself. Because of the Arab Spring, the world is once again pregnant with better and more hopeful versions of itself. The crescendo of transnational uprisings from Morocco to Iran, and from Syria to Yemen, are turning the world upside down. The task facing us today is precisely to see in what particular way our consciousness of the world is in the midst of transforming itself – by force of history. The world we have hitherto known as “the Middle East” or “North Africa”, or “the Arab and Muslim world”, all part and parcel of a colonial geography we had inherited, is changing, and is changing fast. We have now entered the phase of documenting in what particular terms that world is transcending itself, overcoming the mystified consciousness into which it was colonially cast and postcolonially fixated.

In understanding what is happening in North Africa and the Middle East, we are running out of metaphors. We need new metaphors. Even the word “revolution” – understood anywhere from Karl Marx to Hannah Arendt – needs rethinking. Such a new language of the revolution will cast the impact of “the Arab Spring” on national and international politics for generations to come. These uprisings have already moved beyond race and religion, sects and ideologies, pro- or anti-Western. The term “West” is more meaningless today than ever before – it has lost its potency, and with it the notion, and the condition, we had code-named postcoloniality. The East, the West, the Oriental, the colonial, the postcolonial – they are no more. What we are witnessing unfold in what used to be called “the Middle East” (and beyond) marks the end of postcolonial ideological formations – and that is precisely the principal argument informing the way this book discusses and celebrates the Arab Spring. The postcolonial did not overcome the colonial; it exacerbated it by negation. The Arab Spring has overcome them both. The drama of this delayed defiance Arabs have now called their spring; and I will use the occasion to make a case for our having entered the phase of the end of postcoloniality, delivered from exacerbating a historic trauma.