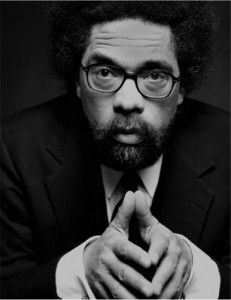 For New York Magazine, Lisa Miller profiles Cornel West, surveying the course of his academic career, personal life, and variety of public spats with figures like Larry Summers and Barack Obama. West tells her, “I want to be like Jesus,” and Miller considers why that might be. West is set to leave Princeton and head to Union Theological Seminary this summer for what he calls “the last stage of his work and witness.”

In November 2007, Cornel West got onstage at the Apollo Theater in Harlem and before a hollering crowd of more than a thousand people, with much arm-­waving and wrist-flapping, along with a certain amount of ass-wagging, introduced his candidate for president of the United States—“my brother, my companion, and my comrade”—Barack Obama. “He’s an eloquent brother,” preached West. “He’s a good brother, he’s a decent brother.” Obama returned the sloppy kiss and pronounced West “an oracle.”

That compliment could not have been more apt, for West regards himself as a prophet more than a professor. He believes that he is called to teach God’s justice to a heedless nation. “There is a price to pay for speaking the truth,” reads the signature on e-mails coming from West’s office. “There is a bigger price for living a lie.” So when his view of the commander-in-chief changed from adoration to disappointment, West was moved to proclaim it out loud. He had already been lobbing rhetorical grenades in the direction of the Oval Office, calling the president “spineless” for his failure to make poor and working people a policy priority and “milquetoast” for kowtowing to corporate interests during the economic crisis. But in an interview with Truthdig, ­published last May, West went nuclear. He called Obama “the black mascot of Wall Street oligarchs.” And then he said he wanted to “slap him,” as the article put it, “on the side of his head.”

In the white world of mainstream media, the interview made a few headlines. But in precincts of the left, and among certain African-American scholars, it unleashed a tide of anguish. West has been an intellectual celebrity for three decades, protected and cherished by his like-minded comrades, but the nasty tone of his Truthdig comments caused many of his closest colleagues to question their devotion, to suspect his motives, and to wonder whether West’s prominence had finally exceeded his merit. Their concerns were in part pragmatic: As the 2012 election approached, some thought West might make his case better if he weren’t quite so mean.