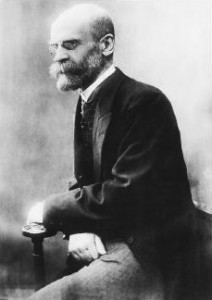 This Friday, March 30, at 12:30pm, the Committee for the Study of Religion at the City University of New York Graduate Center is hosting a lecture by Steven Lukes with the title “Is Durkheim’s Understanding of Religion Compatible with Believing?” The lecture marks the centenary of the publication of Émile Durkheim’s classical work, The Elementary Forms of Religious Life.

Does Durkheim’s sociology of religion pose a challenge to the faithful? Durkheim said no in debate with contemporary non-believers and believers, portraying religion not as “mere illusion” but as consisting in “moral forces” that command, comfort and strengthen the faithful, forces generated and regenerated within them by the “collective effervescence” of rituals. Thus empowered, the faithful imagine in symbolic form “the society of which they are members and the obscure yet intimate relations they have with it.” Durkheim’s answer is shown to have three components: a critique of naturist and animist “error theories” of religion; a method of “deep interpretation,” uncovering the “reality” beneath the symbolism; and an explanation of why the meaning of religion thus interpreted should have been for so long unacknowledged by the faithful. It is argued that, in principle, they can, on certain assumptions, accommodate his sociology of religion. But this, in turn, makes key assumptions and claims that have been seriously questioned: notably, that “religion” names a unified phenomenon and that Durkheim’s definition captures it. Recent revised “Durkheimian” accounts of religious thought and practice are considered, accounts that abandon these assumptions and also his “social realism,” while seeking to preserve his insights. It is argued that these too need not directly challenge religious belief in the way that the cognitive science of religion does.

For further details on the lecture, see here.