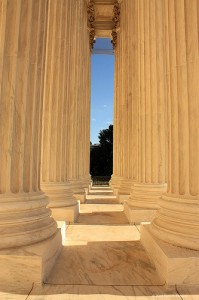 Some initial disclosures and disclaimers seem appropriate from the start. I am a theologian, not a lawyer—but I am the son of a lawyer. I am not a pastor of The Lutheran Church—Missouri Synod (LCMS) or a member of an LCMS congregation—but I grew up in LCMS congregations, attended two LCMS colleges and a seminary, served as an LCMS pastor for 28 years, and was a faculty member and senior administrator at two LCMS institutions of higher education from 1984 through 2003. Since 2004 I have been a member of the Theology Department (and for two years now the department chair) at an independent Lutheran university. Since 2007 I have been a pastor in the Evangelical Lutheran Church in America (ELCA) for reasons entirely irrelevant to a case that has recently come before the Supreme Court of the United States:  Hosanna-Tabor Evangelical Lutheran Church and School v. Equal Employment Opportunity Commission.

The upshot is that I believe that I can offer a perspective that can fairly claim to be both informed and disinterested. Call what follows an “amicus curiae” brief, from a cleric as to the church, but a layperson as to the law, offered for what it’s worth to those with a close eye on this case.

This is not the place to rehearse the facts or the legal points at issue. The keys to the entire case, as best I can frame them, are whether or not the Supreme Court will affirm a “ministerial exception” that has regularly been asserted by lower courts and that gives churches nearly unlimited discretion with respect to personnel decisions about their ministers and whether or not Cheryl Perich, a former teacher at the school operated by Hosanna-Tabor Lutheran Church (LCMS), truly was a minister. The other much-mooted issue of how central it is to the doctrinal core of the LCMS to claim that ministers must avail themselves of internal, ecclesiastical appeals procedures in lieu of civil court actions is, to my mind, secondary to the point of being a sideshow. If Ms. Perich was not a minister in the full sense of the word and so did not qualify for the “ministerial exception,” the question of whether or not she pursued her grievance as the LCMS requires of ministers is irrelevant. If she was a minister, and there is a “ministerial exception” in the sense affirmed by other courts, then why she was released is also legally irrelevant.

It is at this point that some insider knowledge of the history and polity of the LCMS is helpful. From its beginnings as an assemblage of mid-nineteenth century immigrants from Germany, formally organized in 1847, the LCMS has affirmed that both pastors and those teachers who are formally certified for service in the church’s schools may be “called” as ministers of the Gospel. The entanglement of the LCMS’s understanding of minister with governmental definitions first became a serious matter at the outset of the Second World War, when Synodical officials had to exert considerable effort to have called teachers granted ministerial deferments from the draft. A second entanglement then occurred vis-à-vis the Internal Revenue Service, when the question arose of called teachers’ eligibility for a special benefit known as the “ministerial housing allowance.”  Again, the matter was resolved in favor of including LCMS teachers as ministers.

Two complications came to the fore early in the second half of the twentieth century. One was what to make of teachers in Lutheran schools who were not Synodically-trained and certified (and therefore not eligible for call as ministers), but who often served side-by-side with called teacher-ministers. Given at least the prima facie meaning of an LCMS bylaw adopted in the 1960s, LCMS schools were required to employ only called teachers as a condition of their sponsoring congregations’ membership in the Synod. The other issue (not entirely unrelated in some schools) was what to say of women who were Synodically-trained, certified, and called as teachers, given the LCMS’s opposition to women as ministers, at least in a pastoral role. Over the course of about three decades, from the 1960s through the 1980s, these questions were sorted out in a series of LCMS conventions. Women could not be pastors, but they could be called as teachers, and those so called were ministers and eligible for all associated privileges (such as the exemption of the housing allowance from taxation). Synodical schools were strongly encouraged to employ only called teachers and were further encouraged to see to the Synodical training and certification of those not yet called (a path called “colloquy” that was followed by Ms. Perich in the case at hand), but non-called teachers were officially permitted, albeit in no way as “ministers.”  Finally, largely in response to pressure from the IRS, the Synod established the present, official terminology:  pastors were “Ministers of Religion—Ordained,” while called teachers (and other certified staff, like deaconesses) were “Ministers of Religion—Commissioned.”  While the duties of the two groups differed (as did their status in the Synod—dramatically so), both were “ministers” for both secular purposes (like the IRS and Selective Service) and eligibility (otherwise extended only to congregations, but not laypersons) to be formal “members” of the Synod.

In sum, based on my knowledge of the LCMS, there seems little question that Cheryl Perich qualifies as a “minister” and is subject to the “ministerial exception.”  So what of the latter?  As I understand the matter, the Supreme Court has never itself explicitly defined or affirmed it. Yet I’d be astounded (and more than a little disturbed) were the Court to deny or radically alter its historic meaning, and especially were they to move outside of churches the authority to define who is a minister vis-à-vis a layperson. The justices themselves seem to understand clearly that either redefinition or rejection could have extraordinary unintended consequences vis-à-vis the First Amendment (even if their frame of reference appears to be limited to Roman Catholicism and specifically to the canon law restricting the priesthood to males). “Hard cases make bad law,” as the saying goes, and it seems that in this case the price of keeping the religion clauses of the First Amendment intact is to avert our eyes from a possible egregious abuse of the statutory rights of an individual.

That would be so, if the Supreme Court’s decision in this case truly were the final word on this matter. It is not. The Court will, as it does so often, weigh competing goods and rights and will, almost inevitably, favor one at the expense of the other. The real question to my mind is whether or not Hosanna-Tabor Lutheran Church and School will do right by one who went to considerable effort to become eligible for a call, only to be burned by the consequences of the ministerial status that her additional training and certification enabled. I say this even as I am fully aware that there may be personal personnel factors of which I’m ignorant—I was in university administration long enough to know all too well that sometimes one cannot tell the whole story and simply has to accept being pilloried as a result. But as things stand, the church—and in the world’s eyes this means the whole Christian Church—stands shamed, required to take refuge in legalities in lieu of the care for the hurting and the mutual submission, reconciliation, and willingness to turn the other cheek that the Founder seems to have had in mind.

To my mind, that’s the real danger here and—even at this late legal hour—the real opportunity for witness to what St. Paul once called “a more excellent way.”

George C. Heider is Associate Professor of Theology and Chair of the Department of Theology at Valparaiso University.