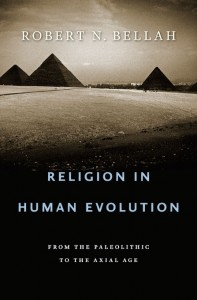 Bellah seeks an explanation of religion not because he believes all religions are about kindness, or that they all “poison everything,” as Christopher Hitchens has said. Bellah is less concerned with whether religion is right or wrong, good or bad, perfume or mustard gas, than with understanding what it is and where it comes from, and in following the path toward that understanding, wherever it may lead.

In this, he is unfortunately in the minority among those with something to say on the subject these days. The medieval—or perhaps it is merely adolescent—preoccupation with the truth or falsehood of religious claims displayed by most popular writers on religion would be comical, if it were not such a bore. Bellah avoids such problems because, he says, he observes religion from a position outside the culture war. “I am interested to find myself on both sides of the far too polarized opposition,” he notes, “not only between science and religion, but between the methodologies of scientific explanation and humanistic understanding.”

In a perfect world, the endless curiosity on display throughout Religion in Human Evolution would set the tone for all discussions of religion in the public square. Until then, the ability to see faith from both sides may remain as surprising as a dinosaur in an art film.