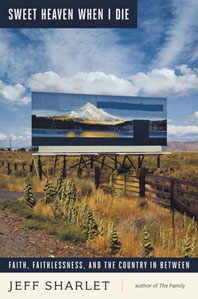 I do much of my reading these days on New York City’s A train, en route from my Brooklyn neighborhood of Bed-Stuy to Harlem, and that’s where I read much of Jeff Sharlet’s latest, Sweet Heaven When I Die: Faith, Faithlessness, and the Country in Between. As it turns out, that’s just the place to read it. The train car is one of those only-in-America places, a microcosm of the country’s manifold social and cultural contradictions. After we’ve all packed in and stood clear of the closing doors, our gazes wander around, each straphanger at once observer and observed, the subject and object of fears, desires, and annoyances. Itinerant preachers seek—and, surprisingly often, find—a sympathetic audience. It could all be taken straight off a page of Sharlet’s book.

To focus on my reading amidst all this, I often drown out the sounds around me with my clunky Koss headphones, thereby acting out the aloofness that Georg Simmel recognized as the outward expression of the big city’s typical subjective orientation: the famous “blasé attitude.” This attitude is at a great distance from Sharlet’s, who embodies true engagement in all his encounters documented in the book. Still, it turns out that playing music is also an apt thing to do while reading Sweet Heaven. Music plays a big role in Sharlet’s dispatches—Neil Young, Creedence, the Philadelphia-based hardcore band The Boils, an anarchist marching band, Dock Boggs, and, of course, sometime spoken-word artist Cornel West all make appearances—and as I was reading the book’s would-be titular opening chapter, “Sweet Fuck All, Colorado,” while blasting the Queens-based rap group Das Racist, I couldn’t help noting the parallels between their verse and Sharlet’s prose. There’s the matrix of far-flung allusions. There’s the intimate knowledge of popular culture laced with highfalutin theory in a distinctly non-highfalutin manner. There’s the smart and unexpected reversals. There’s the humor.

But Sweet Heaven When I Die is, first and foremost, a book about loss, about death, transience, neglect, and quitting. These are the recurring themes in almost every one of the book’s thirteen chapters. The loss of the American west to real estate developers, the loss of a beloved uncle to a meaningless war, the killing of veteran activist Brad Will in Oaxaca in 2006, the neglect of the Yiddish language and its masterful authors, or the devastation of a writer failing to find an audience. In one chapter, Sharlet notes that all things we become invested in and pin our identities on have a half-life. With his consciousness of the inevitable decay befalling all things, Sharlet proves he has taken Cornel West’s lesson of the “death shudder” to heart. “To learn how to die in this way,” Sharlet quotes West in a chapter on the philosopher, “is to learn how to live.” And although the final chapter of When I Die is called “Born, Again,” Sharlet resists the temptation to end on an upbeat note, leaving us instead with a blues note.

Sharlet is at his best when he writes about the interior of religious life that is never mere interiority. In every wonderfully told, intimate, (auto-)biographical detail, we learn something of more wide-ranging significance. Perhaps we learn a bit about how to die and how to live. At the very least, we learn a lot about the religious field in America. Sharlet’s approach to this field is through its boundaries, or “fringes.” His dispatches tell us about that which eludes quantification, that which cannot be gotten at in responses to survey items. His reporting opens up perspectives that political scientists or sociologists of religion lack. He illustrates the ways in which positions and desires within the religious field, even within individual religious persons, are never cut-and-dried. Instead, American religious life is contradictory and often runs counter to the statistical regularities that social scientists base their stories on. “Liberal” and “conservative” are largely meaningless, and certainly not a polarized dichotomy. Losing faith is not necessarily a one-way street. In mourning the lost faith, in returning to the lost places of one’s youth, Sharlet and the people he portrays find themselves in a conflictual in-between space. Sharlet eschews applying facile labels to this “country in between” alluded to in the subtitle. His stories are not about “seekers” or “shopping in the spiritual marketplace.”

There are also a few forays into the more spectacular expressions of American religious life, particularly his chapter on the evangelical youth organization Battle Cry and its Acquire the Fire events. In this chapter, Sharlet’s subject matter is closer to that treated in his earlier book, The Family: The Secret Fundamentalism at the Heart of American Power, in that it treats a highly rationalized organization on the far-right side of evangelical Christianity in the U.S. Despite its ominous-sounding title, The Family was not simply a predictable indictment of right-wing machinations by an east coast liberal. Sharlet lived among a group of young male volunteers at Ivanwald, a guesthouse in northern Virginia run by the Family (alternately known as the Fellowship) and in his portrayal of the group, he gives just as much room to the everyday life of the organization as he does, for instance, to the often alarming views of its founder, Douglas Coe, even though it complicated what could have been a very easy story to tell. “Vast Right-Wing Conspiracy Poised to Transform U.S. into a Theocracy”—which publisher wouldn’t love that? But Sharlet does not look for easy targets to shoot down with his debunking prowess. That does not mean that he limits himself to “giving voice.” It does mean, however, that he listens closely before adding his own commentary.

In his analysis, I will venture to claim that his model is Barth, not Barthes. He does not seek to decode the underlying logic of the figures and events he reports on, as Roland Barthes did in his brilliantly failed analysis of Billy Graham in the 1950s. (After attending a rally, the French semiologist was convinced Graham was destined to be a fly-by-night.) The Swiss theologian Karl Barth, much like Cornel West after him, drew from Christianity’s concept of love a model of “protest against the course of the world,” a way of being ethical in a world mired in injustice. Sharlet searches for such pockets of love-as-protest that persist in unlikely places in America—from personal relationships in the heartland to radical politics in New York City. It is rewarding to join him on this search.