In May 2011, a presentation at the New York headquarters of the United Nations promoted an event organized by an Italian Catholic movement, Communion and Liberation, that has been branded by several scholars of religion as “fundamentalist” (see for instance, Antoun, Davis and Robinson, and Zadra). More peculiar, perhaps, was the cast of presenters promoting the event: a Jewish professor of law from NYU, a Muslim professor of Arabic from the American University of Cairo, and the Italian Ambassador to the United Nations.

The title of the event itself seems peculiar: “The Meeting for the Friendship Among the Peoples.” Held every summer since 1980, it is a week-long cultural festival in Rimini, a small Italian city on the Adriatic coast, and brings together prominent religious leaders, politicians, scientists, and artists. Notable past participants include religious figures such as the Dalai Lama, Mother Teresa, Pope John Paul II, and David Rosen (Rabbi of Jerusalem); philosophers such as Emmanuel Levinas and Simone Weil; politicians such as Lech Walesa and Tony Blair; Nobel laureates such as Pakistani physicist Abdus Salam and American astrophysicist George Smoot; Tunisian historian Mohammed Talbi; opera singer José Carreras; American choreographer Martha Graham. Run predominantly by unpaid volunteers, the event draws more than 750,000 visitors a year from around the world. With its purported aim being to foster friendship and unity among diverse peoples, the Rimini Meeting hosts discussions and exhibits on aspects of theology, philosophy, politics, economics, art, literature, music, science, commerce, law, and even sport. 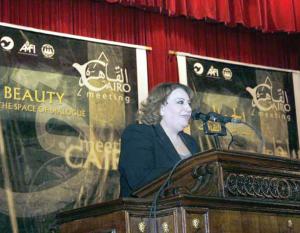 The event has already seen its diffusion into the United States a couple of years ago in the form of the New York Encounter. Last year, the first edition of this event was held in Cairo.

So what might all this mean? For one, there’s clearly something wrong with the widespread categorization of this movement and its activities as fundamentalist (look at the organizing committee of the Cairo Meeting, for instance). But further—and this is perhaps why these developments appear so unusual to most of us—it doesn’t really fit into our conventional assumptions about the possibilities for religion in modernity.

Certainly this is an old and well-established way of framing the question—“what happens to religion with the advent of modernity?”—which itself is problematic because it assumes that religion necessarily can only take some sort of passive or reactive role and itself has nothing to do with the emergence or furthering of modernity. But the question persists nonetheless, and still continues to draw responses from journalists, scholars, and pundits from across the political spectrum. And embedded in broader popular discourse and scholarly accounts alike are assumptions about the possibilities for religion in modernity. These are perhaps the main ones:

Dominant accounts of the religion-modernity relationship, at least among sociologists of religion in the US, have tended to focus on mainly what falls into these categories. But the Rimini Meeting and its offshoots are among a host of new phenomena that really don’t fit into the above, and seem to warrant something else. Is the novelty chronological? Perhaps; but it may also be that we haven’t paid attention to earlier instances of such phenomena because we were too mired in our old categories. At the same time, recognizing this doesn’t warrant a dismissal of the above categories. Phenomena such as the Meeting appear unusual to us not simply because our old categories are inaccurate to describe it, but also because they are so different from the host of other phenomena which do exist and fit into those categories.

So what can we call this? One term that I think might work is “resacralization.” Schmalzbauer and Wheeler define it as “the return of religious meanings to public sectors of social life such as politics, the arts, and the body.” Here we see religious groups engaging with modernity such that modern institutions, commitments, and ideals are somehow appropriated into the service of religious goals. Davis and Robinson’s forthcoming book provides examples of such groups, including CL.

However, at least from my ethnographic research on the CL movement and the Rimini Meeting, I find it inaccurate to say that these actors are driven by a sense of “claiming society for God.” That seems to me an imputation of the logic of something like American evangelicalism into contexts in which religiously-committed actors would find such motivations alien (and perhaps even somewhat repulsive). Further, there is a lot less strategy and much more ambiguity in the actions of these actors.

I’ll say more about this in my next post, in which I’ll talk about what volunteers and organizers of the event understand themselves to be doing. I’ll also have something to say about why this may be an instance in which the analytical categories of “religion” or “religious”—which I generally defend—may be more problematic than helpful.