Have the jihadis lost the moral high ground to the rebels? 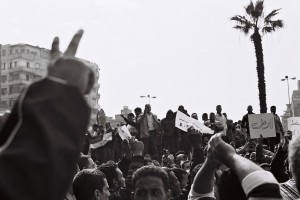 It has been a season of earthquakes, and the political ones in Libya, Egypt, Tunisia, and elsewhere in the Middle East may have shifted the moral high ground within Islamic opposition movements. Put simply, Tahrir Square may have trumped jihad.

For the past thirty years, the jihadi movement has crested on a wave of popular unrest and been propelled by the moral legitimacy given by their violent interpretation of the Muslim notion of ethical struggle. Though jihadi activists such as those associated with Osama bin Laden’s al Qaeda network have been regarded from outside the region simply as immoral terrorists, much of their popularity within the Islamic world has been their moral appeal.

The jihadi ideology has had two dimensions, political and ethical. The political attraction was the alleged necessity of violence to end despotic regimes. Before the protests at Tahrir Square that toppled the Mubarak regime last month, many Egyptian activists were convinced that bloodshed was the only strategy that would work against such a ruthless dictator. They imagined that their acts of terrorism—against the regime and against the “far enemy” of America that they assumed was propping up the Mubarak system—would eventually lead to a massive revolt that would bring the dictatorship to an end.

They also thought that only the jihadi ideology of cosmic warfare—based on Muslim history and Qur’anic verses—provided the moral legitimacy for the struggle. Ideologists such as Abd al-Salam Farad and  Ayman al-Zawahiri have written as if violent struggle—including ruthless attacks of terrorism on civilian populations—was the only form of struggle that was advocated by Islam.

These assumptions have been proven wrong. The dramatic popular uprisings in Tunisia, Egypt, Libya, Bahrain, Yemen, and elsewhere in the Islamic world in recent weeks have demonstrated that protests that have been nonviolent in their inception (and have become violent only in response to bloody attempts to repress them) have been far more effective, and supported with a more widespread moral and spiritual consensus.

What brought down the tyrants in Egypt and Tunisia, as it turned out, was about as far from jihad as one could imagine. It was a series of massive nonviolent movements of largely middle-class and relatively young professionals who organized their protests through Facebook, Twitter, and other forms of electronic social networking. No doubt the passivity of the Egyptian military was also a critical factor; the army did not forcibly resist the protests, as the military has in Bahrain, Saudi Arabia, and Libya.

Yet one cannot underestimate the importance of Tahrir Square, and similar protests in Alexandria and throughout Egypt. Clearly, they constituted the catalyst for change. Perhaps not since the peaceful overthrow of the Marcos regime in the Philippines has the world seen such a dramatic demonstration of the power of nonviolent resistance. The protests were not the weapons of jihad, nor were the voices of opposition the strident language of Islamist extremism.

There was also a religious element to the protests. The peak moments came after Friday prayers, when sympathetic mullahs would urge the faithful into joining the protest as a religious duty. But theirs was not the divisive, hateful voice of jihadi rhetoric. In a remarkable moment when the Muslim protesters were trying to conduct their prayers in the Square and Mubarak’s thugs tried to attack them as they prayed, a cordon of Egyptian Coptic Christians who had joined the protests circled around their Muslim compatriots, shielding them. Later a phalanx of Muslim protesters protected their Christian comrades as they worshiped in the public square, an urban intersection that was for that time transformed into a massive interfaith sanctuary.

The religiosity of Tahrir Square is far from the religion of radical jihad. Rather than separating Muslim from non-Muslim, and Sunni from Shi’a, the symbols that were raised on impromptu placards in Tahrir Square were emblems of interfaith cooperation; they showed the cross of Coptic Christians together with the crescent of Egypt’s Muslims in a united religious front against autocracy.

Imagine what Osama bin Laden must have made of all of this as news trickled into the cave or cellar or whatever lair in which he is hiding. Imagine even more the puzzled chagrin of someone like bin Laden’s primary lieutenant, Ayman al-Zawahiri, the Egyptian medical doctor who joined the most extreme Islamist jihadi movement years ago, convinced that only violent guerrilla warfare would topple someone like Mubarak.

Tahrir Square clearly showed that Zawahiri was wrong. Does this mean that al Qaeda is finished, and the radical struggles of jihad will fizzle into history?

Perhaps, in part. It is unlikely, however, that the al Qaeda organization, such as it is, will be abandoned. The small group of people who comprise the inner circle of the bin Laden organization will no doubt harden its resolve. Like the followers of millenarian movements who become more extreme and entrenched in their beliefs when the prophesied end of the world does not terminate on schedule, the true believers of al Qaeda will soldier on. They may become more extreme in their rhetoric, more desperate in using acts of terrorism to draw attention to themselves and their increasingly impossible view of the world. Yet the al Qaeda inner circle has never been large, and its organization—though capable of conducting horrible acts of terrorism—has never been a consistent and widespread threat.

So, although the hardened activists associated with al Qaeda will linger on, the fate of the global jihadi ideology—or rather the world view of cosmic war that the jihadi rhetoric promoted—is a different matter. This view of the world as a tangle of sacred warfare has been an exciting and alluring image among a large number of mostly young and largely male Muslims around the world for over a decade. It is an image that was brought to dramatic attention by the September 11, 2001, attacks, and stimulated by the perception that U.S. military actions in Afghanistan and Iraq were wars against Islam. This jihadi vision of sacred warfare was propagated by the internet, through postings in chat rooms and the dissemination of YouTube types of videos showing graphic acts of U.S. military destruction in Islamic countries and calling on the faithful to respond.

Some did respond, and the response was a series of attacks during the first decade of the twenty-first century. These global jihad attacks—in Madrid, London, Bali, Jakarta, Mumbai, and elsewhere—were not orchestrated by any single terrorist command. Some were connected with sophisticated regional organizations, but they were not in any direct sense al Qaeda-conducted. But they were all united by the jihadi vision, a vision that provided the moral and strategic legitimation for the terrorist attacks. The jihadi image of warfare provided the moral justification by linking real acts of violence in the world with the divine struggle between the forces of good and evil, order and disorder, that lies within the mythology and symbolism of every religious tradition, including Islam. And the jihadi idea of cosmic war provided a strategic legimitization of violence by the implicit promise—as a leader of Hamas once told me—that if one is fighting God’s war, one can never lose. God always wins.

Yet, as Tahrir Square showed, God does not always have to fight, at least not in the terrorist ways that the jihadi warriors imagined. In a couple of weeks of protests, the peaceful resistors demonstrated the moral and strategic legitimacy of nonviolent struggle. And they succeeded, where years of jihadi bloodshed had not produced a single political change.

This is a profound anti-jihadi lesson, and the significance of Tahrir Square has quickly spread around the world. It has ignited similar nonviolent protests elsewhere in the Middle East, and it may also have altered the thinking of activists in other cultures as well. Intense discussion is underway in Palestine, where the Hamas-dominated strategy of strategic violence has been largely counterproductive; will a new nonviolent and non-extremist movement of young educated Palestinian professionals create a different kind of impetus for change in their region of the Middle East?

The rise of a new nonviolent populism in the Middle East may seriously undercut the viability of the jihadi image of violent social change. On the other hand, a significant number of failures of nonviolent resistance may lead to a violent backlash once again. Not all protests will end like Tunisia and Egypt. Others will be ruthlessly crushed, as was the Green Revolution in Iran, in 2009. The current protests in Bahrain, Saudi Arabia, and Libya face an uncertain end. Failure of nonviolent revolution has, in the past, been the occasion for renewed acts of violence.

So the jihadi warriors may again have their day. For the moment, however, Tahrir Square has challenged both the strategic value and the moral legitimacy of the jihadi stance. The legion of young Muslim activists around the world have received a new standard for challenging the old order, and a new form of protest, one that discredits terrorism as the easy and ineffective path and chooses the tough and profitable road of nonviolence.