On January 25, thousands of men and women marched into Midan al-Tahrir—Liberation Square—in central Cairo. Over the past two weeks, we have seen the number of protesters in the square increase until, on Sunday, February 6, it was estimated to have reached two million. For thousands of Egyptians, the square became the place where they spent their days and nights, chanted against the current regime, and worked together to assert their views and rights. Thanks to satellite TV channels such as al-Jazeera and Internet sites like Facebook and Google Maps, we became virtual participants in what happened in the square, following the events, day and night, from our homes in different parts of the world. One may have felt hopeful when the protesters asserted their views, or may have felt sad when seeing an injured young man, or may have felt angry when watching someone throw a firebomb or assault a protester with a baton.

In front of our own eyes, Midan al-Tahrir has transformed from a site for the protesters to gather and express their demands into a central part of the protesters’ broader struggle for legitimacy, visibility, and political rights. Midan al-Tahrir is living up to its name as the Liberation Square; the protesters are insistent that they will not leave their spatial and symbolic location until President Mubarak steps down. Over the past few days, many of us have heard people on the television chanting, “Mish ha nimshi, huwa yimshi” [We will not leave, he should leave], most recently in response to the army’s request that the protesters go home and allow normal life to resume in Cairo.

These last events have been analyzed by social scientists, journalists, and policy makers mainly by looking at their temporal dimensions and exploring the historical forces that promoted the protests. Yet, the past two weeks have shown once again the importance of space in the operation of power, the challenging of political systems, and the constitution and legitimization of specific publics. We have witnessed young men and women pour into city streets and squares and onto bridges to protest unemployment, poverty, corruption, police brutality, election fraud, and political stagnation. They come from different classes and neighborhoods to inhabit the same spaces and to express a collective discontent with the political and economic conditions of their country.

It is illuminating to ponder the recent events in Cairo’s Midan al-Tahrir as we try to understand the relationship between space, power, belonging, and resistance, as well as the productive interplay between physical and virtual space. Communication technologies such as the Internet (especially the websites Facebook and Twitter) and mobile phones aided the organization and publicizing of the protests in Egypt. At the same time, the marches, rallies, and the demonstrations of millions of Egyptians have brought a sense of visibility and immediacy that other means of communication alone would not have been able to secure. As I write this piece, the strong link between virtual and physical space continues to be central to the making of publics that are seen, heard, and legitimized.

The history of Liberation Square endows this location with special spatial, political, and symbolic value. The square (which is actually a circle) was originally named Midan al-Ismailia, after Khedive Ismail, who ruled Egypt during the second part of the nineteenth century and who was eager to Europeanize Cairo. The Midan (literally, an open space) was built to regulate the increasing traffic of Cairo. After the 1952 revolution, the nearby barracks that housed the British occupying troops were torn down and the area became widely known as Midan al-Tahrir (Liberation Square). Over the years, the Midan has been the site of several important protests, such as the 1977 bread riots (when Egyptians protested President Sadat’s attempts to increase the prices of some basic necessities, especially bread) and the 2003 protests against the war in Iraq. Yet, never had it been the site of the type and scale of protests we see today.

Midan al-Tahrir, the area of which now encompasses the original circle, an open space, and several important buildings, is centrally located in Cairo. It is currently the nexus of the Egyptian capital’s  metro system, a major stop for cabs and city buses that connect different parts of Cairo, and in close proximity to many important national, political, and educational institutions, including the Egyptian Museum, the National Democratic Party headquarters (recently burned down by protesters), the Headquarters of the Arab League, part of the American University in Cairo, and the Mugamma, a notorious building that houses many government bureaucracies). On its edges, one finds fancy hotels (such as the Semiramis Intercontinental and the Nile Hilton), international fast-food restaurants (like Pizza Hut and KFC), as well as cafés, airline offices, travel agencies, and newspaper stands. The Midan is very close to the Nile Corniche and is frequented by many Egyptians in transit, on their way to work, to shop, or to take a leisurely walk along the Nile. It is also a space that is frequented by men and women, young and old, rich and poor, Muslim and Christian, and “religious” and “secular.” In short, the Midan represents the blending between the old and new, the West and East, and the national and the global, as well as the mixing of different genders, classes, and religious groups.

Who will leave first?

“Either they answer our demands, or we are not leaving this square no matter what.”
—Egyptian protester 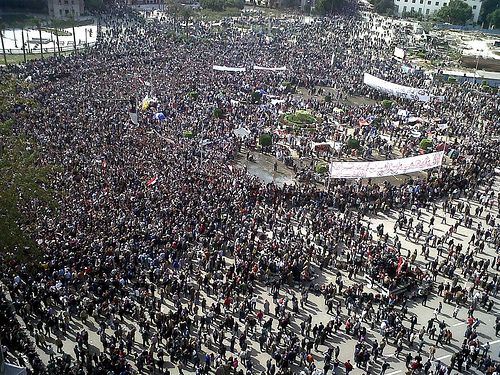 All of the aforementioned factors contextualize the importance of Midan al-Tahrir as a site for public gatherings in Egypt. Yet, it is also important to trace how, over the course of the past two weeks, the Midan itself has shifted from being simply the location of the protest movement to being itself part of the struggle over legitimacy and visibility.

On January 25, the Day of Anger, it was estimated that approximately 15,000 men and women managed to march to Midan al-Tahrir. Paradoxically, the government tried to contain the protests by shutting down Internet and mobile services, which seems only to have motivated more and more people to get out to public spaces, including Midan al-Tahrir, to voice their discontent. Despite initial clashes with the police forces, the protesters continued to grow in numbers, and the police soon had to withdraw, to be replaced by the army, who declared that they would not shoot at the protesters. The Midan was consolidated as a site with specific boundaries to be protected and maintained after the protesters were attacked by baltagia (thugs) on February 2. Incidental evidence indicates that at least some of the attackers were paid by Mubarak’s supporters or members of the security force dressed in civilian clothes. The assailants attacked protesters with rocks, whips, clubs, knives, firebombs, and even guns. While only a few people were killed, thousands were injured. These attacks were met by strong resistance from the protesters, who soon managed to chase the attackers away and erected barriers and fences to protect the square and regulate access to its vicinities. The attacks also generated more sympathy with the protesters and further increased the number of people (including intellectuals, artists, and movie stars) who frequented the Midan to support them.

During all of this, the Midan has become the symbolic as well as the physical anchor that represents right vs. wrong, change vs. stability, and the nation (el-Sha’b) vs. the system (nizam). The way in which this space has been managed and regulated by the protesters is becoming central to how they see themselves as a group. They have repeatedly expressed their pride that they were able to fend off the baltagia and protect their Midan. Men and women work together to clean the square, protect the property (stores, buildings, and the Egyptian museum) in and around it, offer medical services to its inhabitants, and support each other. The feeling of solidarity and belonging is so strong among the protesters that many are willing to sacrifice their lives to protect the Midan and its people. In many ways, the square mirrors what is happing in other Egyptian urban neighborhoods, where ordinary citizens have taken charge of their streets, alleys, and housing blocks to offer protection, provide basic services, and secure order.

Since February 2, a strong association has been established between staying in the square and victory, on one hand, and leaving it and defeat, on the other. As one protester put it, “If we leave, they’ll hunt us one by one. We know that. . . . It is safe inside the square because people are willing to sacrifice their lives at the frontlines.” The protesters have strongly linked the Midan to the future of Egypt by insisting that they will not leave it before Mubarak leaves office. Despite increasing pressure by the political and military institutions, the protesters are still holding to the Midan and are planning more and bigger rallies.

Currently, all attention is directed at Midan al-Tahrir. During the coming days, we will remain glued to different media, watching and observing how the events unfold. The Midan has become the center of resistance and the struggle to change the political system in Egypt, and a lot hinges on what happens there. As I write this, the Midan is a powerful space that is full of exciting possibilities and potentialities. No doubt about it, whatever the outcome, it will have a tremendous impact, not only on Egypt, but also on the rest of the Arab countries and, perhaps, the world at large.

Farha Ghannam is Associate Professor of Anthropology at Swarthmore College. She is the author of Remaking the Modern: Space, Relocation, and the Politics of Identity in a Global Cairo (University of California Press, 2002) and the co-editor (with Hania Sholkamy) of Health and Identity in Egypt (American University in Cairo Press).