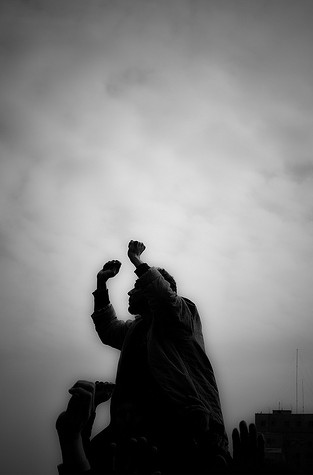 The term ‘secular’ and its conceptual affiliates are doing a lot of work in misrepresenting the uprising in Egypt. ‘Secular’ politics has been taken to mean ‘good’ politics (limited democratization, stability, and support for the peace treaty with Israel), and ‘Islamic’ politics is being translated as ‘bad’ politics (the myriad dangers allegedly posed by the Muslim Brotherhood and its allies). Accounts of the current situation in Egypt are handicapped by an inability to read politics in Egypt and Muslim-majority societies outside of this overly simplistic and politically distorting lens.

The indiscriminate association of the secular with good governance stabilizes an understanding of Islam as that which is not secular. It also, and perhaps even more dangerously, perpetuates the idea of the secular as the natural domain of rational self-interest and universalist ethics. Secular politics comes to stand as the opposite of Muslim politics and as the natural counterpart to all other dimensions of politics that don’t fit comfortably within the categories of rational self-interest or universalist ethics. This is a powerful and capacious category. Beyond securing itself in distinction to Islam, the secular thereby comes to ground and secure a place for the good, rational, and universal, which is opposed to any number of irrational particularisms, aberrations, and variations.

This oppositional rhetoric closes down all kinds of political spaces and possibilities. And today this closure is occurring in real time, as Americans and Europeans rely upon unreflective blanket usages of the secular to organize their responses to the Egyptian crisis. It is striking the extent to which this term—and related constructs, such as secular democracy and secular leaders—serve as placeholders for all that is good, right, and universal in many Western accounts of developments in Egypt. The Muslim Brotherhood (MB), founded in 1928 and still officially outlawed in Egypt, is anxiously depicted in these accounts as ‘Islamist’ and represented as a potential danger that might result from the emergence of democracy in Egypt. Political positions expressed through reference to Islamic tradition, history, or politics are assimilated into the category of ‘bad’ politics and assumed to threaten normal, rational, and democratic politics. Political Islam is seen as a divergence from and/or infringement upon neutral secular public space, as a throwback to pre-modern forms of Muslim political order, or a toxic combination of the two.

Earlier work of mine on the politics of secularism described two widely held evaluative frameworks that fuel these representations of Islam, laicism and Judeo-Christian secularism. These same frameworks are now being mobilized by the media and other political actors to make sense of the crisis in Egypt, forming the backdrop out of which many Europeans and Americans understand developments on the ground. In the first, laicist reading, political Islam is portrayed as a superficial expression of deep-seated economic and political interests and/or an infringement by irrational forms of religion upon would-be secular public life in Muslim-majority societies. In the second, ‘Judeo-Christian’ secularist reading, political Islam is depicted as an undemocratic commingling of Islam and politics that stands against the modern Christian or secularized Christian separation of church and state. This second narrative posits that distinctions between religious and political authority are not only historically absent from Muslim-majority societies but are unthinkable due to fixed characteristics of the Islamic religion. In both narratives political Islam is equated with a refusal to acknowledge the privileged status of the private sphere and a transgression of modern categories of public and private. The effect of these narratives is to equate any appearance of Islamic discourse in political practice with fundamentalism and intolerance. These views of political Islam are alive and well in today’s representations of the MB and help structure Western political responses to the crisis. Fear of the rise to power of the MB in Egypt appears to be among the reasons that the Obama administration is hesitating to call for Mubarak to step down and has expressed ambivalence with regard to American support for the protesters’ legitimate objectives.

Yet we could tell a different story about religion and politics in Egypt. Today Egypt is being challenged over the fundamental structure of the field in which the secular and the religious have been defined. The structure of this field under Mubarak served to legitimize and de-legitimize certain parties, institutions, and forms of collective identification. It allowed certain kinds of political practice, such as vigorous anti-terror laws and violent repression of opponents of Mubarak’s regime, while disallowing others, such as full political participation by parties designated by that regime as ‘religious.’ These distinctions were enacted legally: revisions to Article 5 of the Egyptian constitution enacted in 2006 prohibit political activity based in any way upon religion, effectively banning the Muslim Brotherhood from formally participating in politics.

The United States has stood forcefully and famously behind this state-instituted and highly securitized secular-religious oppositional binary as a means of defending its interests in the region, defined primarily as ensuring Israeli security, pursuing the war on terror, and guaranteeing access to oil. In a 2005 speech at the American University in Cairo, Condoleeza Rice remarked: “our goal here is to encourage the Egyptian Government, within its own laws and hopefully within a process and a context that is ever more reforming, to engage with civil society, with the people of Egypt for elections that can be free and fair. But we have not engaged the Muslim Brotherhood and we don’t—we won’t.” According to Samer Shehata and Joshua Stacher, the Bush administration further hardened this position after Rice’s visit. After Egypt’s 2005 parliamentary elections, in which the MB gained one-fifth of the seats in parliament, U.S. pressure on the Mubarak regime decreased and then ceased entirely after Hamas’ victory. Washington remained silent as the Mubarak regime arrested hundreds of Brothers and transferred dozens to military courts.

Today the Egyptian people and a powerful anti-Mubarak coalition are overturning this entire structure of domination, upheld by Mubarak and aided and abetted by the Americans and the Europeans for decades. The future is up for grabs. Rami Khouri, the eminent Lebanese journalist, has described this momentous change as “the unraveling of the post-colonial order that the British and French created in the Arab world in the 1920s and 30s and then sustained—with American and Soviet assistance—for most of the last half century.” It is unclear whether decision-makers in the United States and Europe will recognize the potential of this moment for Egyptians and others in the region to open up and remake the political playing field along participatory and democratic lines, or whether they will cling to the familiar securitization of secular/religious politics in the name of regional security and order.

Events may impose a new worldview. As Philip Weiss observes: “the danger to America and Israel is that the Egyptian revolution will destroy this false choice of secular dictator-or-crazy Islamists by showing that Arabs are smart articulate people who can handle real democracy if they get to make it themselves.” Mohamed ElBaradei likewise describes the idea that Islamic fundamentalists are set to take over Egypt as “a myth that was sold by the Mubarak regime—that it’s either us, the ruthless dictators, or . . . the al Qaeda types.”

At the time of the Iranian revolution, Michel Foucault observed that “the problem of Islam as a political force is an essential one for our time and for years to come, and we cannot approach it with a modicum of intelligence if we start out from a position of hatred.” The ascription of threat to the MB empowers those who argue that the West aspires to global hegemony through a crusade against Islam. It emboldens Mubarak and fellow autocrats throughout the region. And it fails to address the realities of contemporary politics in states in which these movements have gained a strong and legitimate political foothold that cannot be washed away by wishful thinking in Washington, London, or Jerusalem.

Such a hostile attitude toward the MB is also unfounded. As Nathan Brown describes them, “a lot of their program is just standard reform stuff—independence of the judiciary, the end of corruption, protecting the environment. Especially when they got more political over the last 10 years or so, what they really began to push was a very general reform language that takes Islamic coloration in some areas. But an awful lot of it is consistent with other reform programs coming from reformists all over the political spectrum.” It remains to be seen whether Western decision-makers and pundits will display the political courage and intellectual creativity needed to transcend the false choice between secular dictators and “crazy Islamists” and support real democracy in the Middle East, for a change.