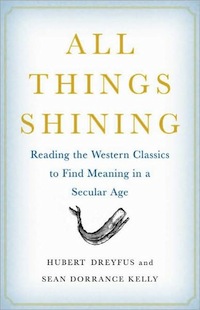 By the time they contemplate an application to graduate school, philosophy students have learned that it isn’t merely tacky to display an interest in questions about the meaning of life; it’s a major professional risk. For many decades, British and American students were urged to turn their attention instead to the meaning of language, while European philosophers were engaged in more portentous-sounding but equally arcane diversions. There were occasional, notable exceptions — Stanley Cavell’s work showed how the meaning of one’s words and the meaning of one’s life might coincide — but then Cavell was long considered to stand outside the real business of philosophy. Even more fatally, students were introduced to the history of philosophy as a series of epistemological puzzles decontaminated from troubling concerns about what it means to be human, a question that had moved the great philosophers of the canon as surely as any thoughtful 18-year-old.

Against this background, Hubert Dreyfus and Sean Dorrance Kelly’s “All Things Shining” is certainly good news. Here, two distinguished philosophers from the heart of the profession offer a meditation on the meaning of life, in a sharp, engaging style that will appeal to readers both within the academy and beyond it. They provide a compressed narrative of changes in Western understanding of human existence over the course of nearly three millenniums, and argue that reading great works of literature allows us to rediscover the reverence, gratitude and amazement that were available in Homeric times. These qualities, they believe, can be cultivated to provide a bulwark against the nihilism they rightly view as threatening our ability to lead meaningful lives in the 21st century. “The gods have not withdrawn or abandoned us,” they conclude. “We have kicked them out.”