Christianity and its others 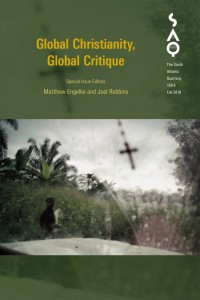 In the nineteenth century the new disciplines in the social sciences and the humanities were “emancipated” from Christian theology. To an important extent, these new forms of inquiry were connected to the rise of modern, industrial society and the nation-form. They were secular in nature—that is, they were part of a secularization of the mind and a de-clericalization of science and scholarship. The most important aspect of this transformation was, obviously, the study of religion itself. This is perhaps clearest in the development of a “science of religion,” an attempt to create a scientific study of religion without Christian theological suppositions. Its claim to scientific truth was based mainly on comparative linguistics and evolutionary theory. Religion was no longer left to Christian theologians but was now the province of anthropologists, sociologists, psychologists, and “scientists of religion.” Definitely, this has not been a smooth transition, and it certainly did not concern only the West. The extent to which this transformation was tied up with imperialism is, despite Edward Said’s work, still not completely taken aboard. First of all, the modern, Western category of “religion” was universalized so as to include a wide variety of traditions all over the world, including newly produced ‘isms’ like Hinduism, Buddhism, Daoism, and Confucianism. Old concepts, like “dharma,” were translated as “religion,” and new concepts, like “zhongjiao”  in Chinese, were cooked up to create new conceptual realities. Secondly, religions came to be seen as carriers of a “transcendent” meaning and higher morality, as in the Axial Age theories of Karl Jaspers, S.N. Eisenstadt, and Charles Taylor. In evolutionary terms, practices that did not belong to this higher morality were relegated to “magic” and “superstition.” This line of reasoning has had a huge influence on fanatically secularist regimes, especially in the communist world. Thirdly, while the social sciences had been liberated from Christian theology, social reality had not. In all parts of the world, a struggle for the minds of the people has been going on—and goes on today—between Christian missionaries and others. The emergence and rise of reformist movements in Islam, Hinduism, Buddhism, Confucianism, and Daoism has to be understood as a cultural defense against the Christian assault on the traditions and practices of colonized peoples. Practically everywhere, missionaries have almost always preceded anthropologists in their fields of study. Conversion to modernity, translation into stronger languages, connections to a wider world: Christian missionary activity continues to create transnational realities that need to be studied by social scientists.

For these reasons, there is a deep and important relation between the social sciences and theology, which goes beyond the secular emancipation of the social sciences. Christianity has produced both the vocabulary into which non-Christian realities are being translated and part of the reality to which Christians and non-Christians alike have to relate. This calls for a reflexivity that cannot be captured by an “Anthropology of Christianity” if that narrowly confines itself to the study of Christianity. Such reflexivity is part of a conceptual project that received its inspiration from Durkheim and Mauss, and which was developed further at Oxford by E.E.Evans-Pritchard, Godfrey Lienhardt, Rodney Needham, and Louis Dumont. Under the influence of Foucault, Talal Asad and others have connected this inquiry into the nature of knowledge to the study and critique of imperial power. It deals with the conflicts and contestations that arise from the field of (colonial and postcolonial) power in which religions are constituted. It cannot restrict its analysis to Christianity, since Christianity is an element of these encompassing imperial interactions. Theologies of dialogue that have been added to pre-existing theologies of Christian superiority and triumphalism have emerged out of the postcolonial situation and have to be engaged at the same time as theologies of evangelical warfare. Christianity’s claim, in both liberal and evangelical forms, to be the foundation of Western civilization has never disappeared and continues to form the battleground on which cultural encounters all over the world take place.

It is doubtful whether what we are seeing today is simply a new global prominence of Christianity. Rather, it depends on where one looks. Europe is quite rapidly becoming secular, in the sense that Christian churches are losing their membership and church attendance is generally in decline. In Europe and other parts of the world, one also sees a mobilization against Islam. The new prominence of discourse on religion in Europe is directly caused by the unease felt by secularized Europeans about the presence of Islam in their midst. It is certainly not to be taken as a de-secularization or a renewed prominence of Christianity. If one looks at China, one can see that a larger space has been opened up for religious practice after a century of oppression, but also that Christianity is only one of the elements of a complex religious scene. If one directs one’s attention to South and South-East Asia, one may see the mobilization of Hinduism against Islam, Islam against Christianity, Buddhism against Islam, and Confucianism against “folk religion.” In parts of the Global South, Christianity’s conflictual expansion should be understood as part of this wider phenomenon. It is important not to be too “presentist” about this aspect of globalization. Many of the religious phenomena we see today have their roots in the nineteenth century. The secular onslaught against religion in the Communist world had its roots in evolutionism and historical materialism. And the struggles around Christian missionary activity also have their roots in the nineteenth century, as does the deep secularism of European intellectuals.

Philosophy has never been able to completely shed its roots in Christian theology, despite the deeply anti-metaphysical project of analytical philosophy. What is called continental philosophy continues to be heavily invested in theological thought, as the work of Teilhard de Chardin and Jean-Luc Marion (or, in the Jewish tradition, that of Levinas and Derrida) testifies. However, it is the global challenge of Islamism that has forced deeply secular philosophers, like Jürgen Habermas, to at least partly engage their Eurocentrism. The secular project in the West has been so successful that Christian philosophers like Charles Taylor think that they live in a secular age. The fact, however, remains, that the majority of humanity lives in the Global South and is not secular, although secularism as a political project can be found everywhere.  At this juncture in world history, philosophy needs to critically engage not only the traditions of Europe but also those outside of Europe. This has hardly happened, and therefore it is anthropology rather than Western philosophy that continues to be the disciplinary site of that engagement.

By far the greatest problem for the anthropological study of Christianity today is that it is not part of a comparative endeavor that examines the interaction of religious movements and projects in different regions of the world. In South, South-East, and East Asia, we find extraordinary competition between different religious movements: Christian, Muslim, Buddhist, and others. Also, within these religions this competition is intense—for example, between Shi’as and Sunnis, or between Protestants and Catholics. Since Christian missions were the first modern endeavors of their type in the world, many of their tactics and strategies have provided models for other religious movements. Education, health care, and social welfare are the fields in which these movements are competing with each other, often without much presence of the state. In refugee camps in Asia, one finds also a heated competition for the souls of the displaced.

An element that needs careful consideration in the study of religious networks and competition between religious movements is the issue of religious freedom. The U.S. in particular is at the forefront of attempts to enlarge the space for Christian missionary activity in countries that limit possibilities for proselytization. It brings the issue up during trade negotiations, like those around entry to the WTO. While one can sympathize with efforts to make the exercise of religious practice and belief more free in countries that have long faced suppression of religion, the fact that there are close connections between such clamors for religious freedom, American evangelism, and American politics makes it into a highly contested issue. Perhaps the anxieties surrounding Saudi Arabian support for Wahhabi mosques in Europe can be referred to for a better understanding of the anxieties that surround U.S. supported Christian evangelism in Asia.

Peter van der Veer is Director of the Max Planck Institute for the Study of Religious and Ethnic Diversity at Göttingen. Among his major publications are Gods on Earth (LSE Monographs, 1988), Religious Nationalism (University of California Press, 1994), and Imperial Encounters (Princeton University Press, 2001). He also contributed a chapter to the SSRC volume Rethinking Secularism (Oxford University Press, 2011). You can read the TIF discussion of his 2013 book The Modern Spirit of Asia: The Spiritual and the Secular in China and India here.