The Power of Religion in the Public Sphere 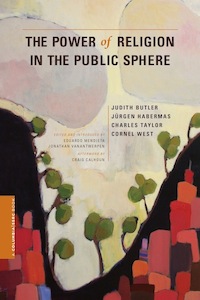 In The Power of Religion in the Public Sphere, Judith Butler, Jürgen Habermas, Charles Taylor, and Cornel West interrogate the specificity of religious and  secular reasons, dispositions, and ethical orientations in relation to democratic politics, each taking up a different strand of the complex entwinement of religion and the public sphere in the contemporary world.

The essays comprising this volume include Habermas’s “The Political: The Rational Meaning of a Questionable Inheritance of Political Theology,” Taylor’s “Why We Need a Radical Redefinition of Secularism,” Butler’s “Is Judaism Zionism?” and West’s “Prophetic Religion and the Future of Capitalist Civilization.” Each chapter was originally presented as a talk at a recent symposium co-hosted by the SSRC, the Institute for Public Knowledge at NYU, and the Humanities Institute at SUNY Stony Brook.

The Power of Religion in the Public Sphere, edited and introduced by Jonathan VanAntwerpen and Eduardo Mendieta, and with an afterword by Craig Calhoun, is due out spring 2011 from Columbia University Press and the SSRC.

[UPDATE: This book is now available.]