Obama’s faith in the common good 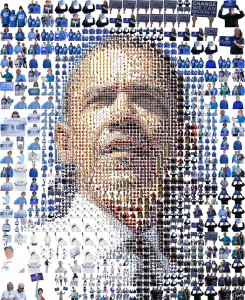 A central theme that emerges from President-elect Obama’s statements about how his faith connects to his politics is the message that, “I am my brother’s keeper, I am my sister’s keeper, we are all children of God.” Observers have consistently connected this ethic of solidarity to an interest in promoting the “common good”—through one’s community and through public policy. How have these themes become intertwined, and what might a commitment to solidarity and the “common good” mean for politics and policy during Obama’s presidency?

In an excerpt from Chicago Sun Times columnist Cathleen Falsani’s 2004 interview with Obama, printed in full for the first time this month, Obama reflects on his faith and his politics:

A standard line in my stump speech during this campaign is that my politics are informed by a belief that we’re all connected. That if there’s a child on the South Side of Chicago that can’t read, that makes a difference in my life even if it’s not my own child. If there’s a senior citizen in downstate Illinois that’s struggling to pay for their medicine and having to chose between medicine and the rent, that makes my life poorer even if it’s not my grandparent. And if there’s an Arab American family that’s being rounded up by John Ashcroft without the benefit of due process, that threatens my civil liberties.

I can give religious expression to that. I am my brother’s keeper, I am my sister’s keeper, we are all children of God. Or I can express it in secular terms. But the basic premise remains the same.

Drawing on themes from Habits of the Heart and The Good Society, Robert Bellah, writing in Commonweal, believes that Obama has evoked the spirit of these books “in a most remarkable way and expressed it more eloquently than anyone in living memory”:

When Obama says “we are our brothers’ keepers; we are our sisters’ keepers,” when he suggests, as he does in so many ways, that we all need one another, all depend on one another, he is using that biblical language at its most appropriate. And in his emphasis on public participation at every level, in his refusal to take money from lobbyists and political action committees, he is reviving the spirit of civic republicanism, of voters as citizens responsible for the common good, not political consumers concerned only with themselves.

Whereas Bellah derives hope from this fusion of biblical language with civic republicanism, some see it as delusion. In a piece for Harper’s Magazine, Simon Critchley points to Obama’s belief in the common good as “the avowedly improbable basis for Obama’s entire push for the presidency”:

This, one might claim, is the familiar delusion of an end to politics, the postulation of a state where we can put aside our differences, overcome partisanship, and come together in order to heal the nation.

What Critchley can’t get over, however, is the feeling that there is more impossibility than possibility in Obama’s religio-moral vision, summing up his—and our—dilemma thusly: “we must believe, but we can’t believe.”

Working just beneath the surface in the essay is a template for belief, insisted upon by so many Americans, into which Obama clearly does not fit. Critchley returns again and again to the qualities of detachment, doubt, and distance that mark Obama’s piety…

If these and other analysts are correct to connect Obama’s statements about his faith to a commitment to certain forms of social action—possibly captured by reference to the common good—one must ask: what are the political implications?

One possible answer can be found in the non-partisan platform produced by several Catholic advocacy groups that have organized around the notion of the common good, and offer some suggestions for how such an ethic might be enacted through both community level action and public policy.

Insofar as an emphasis on the common good might influence voters, Robert P. Jones and Daniel Cox of Public Religion Research discuss their organization’s efforts—which are detailed by Sarah Posner at The Nation—“working with a number of organizations to work for a broader religious agenda of social justice and the common good [and] finding that there are shared values and common ground in unexpected places,” including among uncommitted evangelicals.

Still, Critchley has his doubts that the “common good” can or will be enacted under Obama. In a piece in Adbusters, he outlines his concern that Obama’s “depoliticized moral discourse of the common good” is fundamentally at odds with his “normalization of capitalism,” which might lead to two very different sorts of popular responses. He, perhaps unfairly, claims that in Obama’s electoral victory, the following message goes forth:

‘The victory is yours. But when you’ve finished celebrating, dancing and crying, return to your homes and be quiet. Thanks to you, the business of government is ours and we will take it from here. We’ll let you know how it goes. P.S. Please don’t take popular sovereignty too literally.’

Still, he acknowledges the potential that “What Obama’s victory might unleash is a sequence of progressive radicalizations inside the US and perhaps outside as well that would act as a serious irritant to the usual business of the state or the usual state of business.” He is clearly more convinced that the former impulse to complacency will win out, yet he concludes on a more—dare I say, hopeful?— note: “It might happen still.”