Pay no attention to that man behind the curtain!

Don’t you love the word “debunk”? Its cheerfully aggressive sound is inseparable from its sense. The second syllable, bunk!, seems to leap down from the Latinate first syllable, de, into a pugnacious, vernacular fray, while its definition claims higher ground, wielding Truth over Bunk. Because the term “debunk” is common in the UFO discourses I know, I’ve often implicitly appreciated that its register and texture align less with synonyms like “disprove,” and more with the words it confronts, words like “humbug” and “bamboozle.” After reading Credulity, I understand more why this is so: the all-of-a-piece nature of debunking and humbuggery is Emily Ogden’s point. Enchantment cannot exist without being conjured up by the project of disenchantment any more than the savage can exist without being conceived by civilization. “Modern enchantment is the negotiation between those who are aiming at modernity and those whom they see as nonmodern,” Ogden observes. 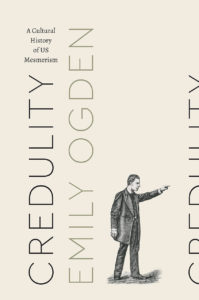 Ogden’s argument for the embeddedness of enchantment in disenchantment reminds me of Sigmund Freud’s observation that the unheimlich (the uncanny) is irreducibly lodged in the heimlich (the familiar). Surfacing in half-repressed familiar things, the uncanny’s power is intensified by concealment, transformed into strangeness through its struggle to emerge. In the practice of debunking, the struggle between occult and enlightenment is a play of mimesis. As Christina Sornito points out in her essay in this forum, the uncanny expresses Freud’s vision of the modern, rational subject through the opposition of an irrational occult. But I think the modern project of constructing credulity reveals a far stronger rationalizing agenda than Freud’s idea of the uncanny did. As Ogden shows, the modern practice of rational containment is infused with the concomitant urgency of cultural capital, in aligning oneself with the savvy against the dupes. The doubling in Credulity, that is, has an agenda beyond the Freudian agenda of the psyche. Ghosts exist, in the modern, to be assessed. Enchantment, Ogden explains, is “the refracted and refractory array of results, some intended and some not, that arises from the attempt to manage credulity.” You use smoke and mirrors to reveal and discipline the sleight of hand.

Credulity is convincing in its arguments that disenchanters aim to control and calculate enchantment. Here modernity is embodied as a stance, constantly reinscribing the gullible foolishness of others to mark its own rationalizing, scientific territory. Caleb Smith and Donovan Schaefer have written very astute responses (and I think the book simultaneously mesmerized and enlightened all three of us).

What tantalizes me in addition to the intellectual battles at the heart of Ogden’s argument are two of its side effects. One is her way of invoking a world of pragmatic ambition that doesn’t notice the borders of mystery. For instance: “Thousands of spiritualist practitioners, and ‘many of the best mediums,’ got their start in mesmerism . . . Somewhat less widely recognized is the fact that spirits got their start in mesmerism, too,” she writes, portraying the gumption-filled terrain of modern wheeling and dealing, where even spirts have to “get their start” to succeed in the game. The second side effect is the very density of stories and scenarios that people not so long ago breathed, spoke, felt, and enacted while all that management and counter-management unfolded. The animal magnetism, the invisible fluids manipulated through magnetic passes, the touching of phrenological organs, the sober scientific commissions with their “gotcha” performance methods, and the vivid capacities of electricity  whose harnessing as a force for modern human convenience was not yet longstanding or ubiquitous enough to have become banal. The docility of the mesmerized and the unruliness of the electrobiological subject. Desire here seems to escape like a charge, crackling beyond modernity’s battle for sovereignty, although that battle is the core narrative, and although whatever exceeded it might not be something we can grasp from here.

And, for me, Credulity cogently snaps a range of more contemporary scenarios into its frame. UFO debunkers sometimes fall into performing something like the patterns of enchanted disenchantment Ogden articulates. Take the Gulf Breeze, Florida UFO controversy. In the 1980s, a man named Ed Walters circulated photographs of a UFO, which were published in the newspaper. It generated a flurry of new sightings by different people. There were hopeful crowds searching the skies and scores of new UFO photographs in the area appeared. The Skeptical Inquirer (perhaps the most famous debunking operation today) outlines the Gulf Stream case in a book review. Inside Walters’s house, stashed in the attic, people found a model UFO “made of Styrofoam plates and such.” A reporter used this Styrofoam model to create his own photograph of a UFO in order to expose the hoax of Walters’s photo. Confronted with this mirrored performance, Walters blamed unnamed “professional debunkers” for planting the Styrofoam model in his home to begin with. “They do whatever they can to debunk a case,” Walters said. Imagine what he imagined: “Professional debunkers” secretly planting a fake UFO and staging pictures of it to trick UFO believers and then, in a triumph of reason, to expose the ruse and enlighten them. The debunking reporter, imitating Walters’s photography of the Styrofoam UFO, came close to this.

The performances of disenchantment remind me as well of Marjoe, a documentary film about Marjoe Gortner. Marjoe—his name combines “Mary” and “Joseph”—was a child evangelist preacher on the revivalist circuit in the late 1940s and early 50s. His act drew huge crowds across the South, as he performed weddings and preached hellfire in his childlike trill. With his mop of blonde curls and precocious manner, he had the appeal of a Pentecostal Shirley Temple. In the 1972 documentary he recounts how, behind the scenes, his parents exploited him, using horrifying physically punishments to make him memorize the words, cadences, and physical gestures of evangelical preacher performance. His parents pocketed the millions of dollars he earned, and Marjoe, who says he never believed in what he was made to preach at all, abandoned the revival scene when he came of age. He joined the intensely secular 1960s California counterculture of his peers. Later, he returned to the revivalist circuit simply to capitalize on his early fame.

When we meet him in the documentary, he is explaining the conventions of the Pentecostal church to the film crew, giving them tips to prepare them for the church. He essentially subscribes to Ogden’s notion of credulity among his believers. The congregations he serves are, to him, subservient dupes. He is beginning to lose a taste for duping, and—like many of the disenchanters in Credulity—actually doing the mystical work is here the exposé. Yet he puts believers into sacred altered states, slays them in spirit, and gives them the space for salvation. He places his hand on their foreheads and they fall to the ground in fits, filled with spirt. It is their misplaced belief that lets them convulse with the Holy Ghost, speaking in tongues. In effect, Marjoe, like an eighteenth century man of science, at least implicitly argues that the power of Imagination is what creates these effects. But where does imagination end? When he leaves the church and resumes his secular conversation, has he stopped producing belief?

Preparing to go preach, Marjoe sits with the film crew. He seems really to fit in with them; they’re all young and cool, like him. He mirrors their casual body language, their hippy talk. Marjoe is their ambassador into another, premodern world. He is portrayed as authentically “behind the scenes,” wearing a very unpreacherly tie-dyed tank top, his childhood blonde mop grown into a kind of Roger Daltrey cascade, and he sits cross-legged on the floor, like a guru, while the film crew—long-haired, smoking cigarettes—listen to his instruction on church folk and laugh incredulously. As viewers, we travel with the film crew to watch Marjoe in the last run of his revival circuit. Now he seems to fit in with the Evangelicals. He wears a snazzy three-piece suit and platform shoes. He masters the southern preaching conventions of parallelism and breathy space breaks, strutting and leaping through the church holding a handkerchief to mop his brow. He has a stylized, butt-in-the air swagger as he preaches; he later says he modeled his performance on Mick Jagger. From the film’s perspective, he is a secular man performing a man of God performing a rock star. We see money passing between the hands of preachers and understand the film’s point of view: this is the realm of hucksters, a ruse for enchanting the credulous, who despite Marjoe’s cynicism and atheism, are nonetheless able, through him, to experience the immediacy of God.

Marjoe invites us to see his cynical preaching as a thoroughly disenchanted performance. But for an anthropologist, there is no baseline of authenticity from which Marjoe deviates into a performance. Just as he performs the cadences of preaching, he performs the cadences of ordinary talk. As Erving Goffman taught us in The Presentation of Self in Everyday Life, we always employ multiple performances of various social roles in different contexts. The Marjoe who sits on the floor with the film crew, exposing the secrets of his church while wearing tie-dye and saying words like “groovy,” is of course also, just as thoroughly, performing these secular conventions (though the documentary reads this secular performance as a transparent self). But why should only the religious performances be marked and the secular unmarked? As Ogden captivatingly shows us, “The pretense of belief had a tendency to become real.”