We had never rented an RV. We had never imagined ourselves renting an RV. It seemed like the last thing we would do. So we did. 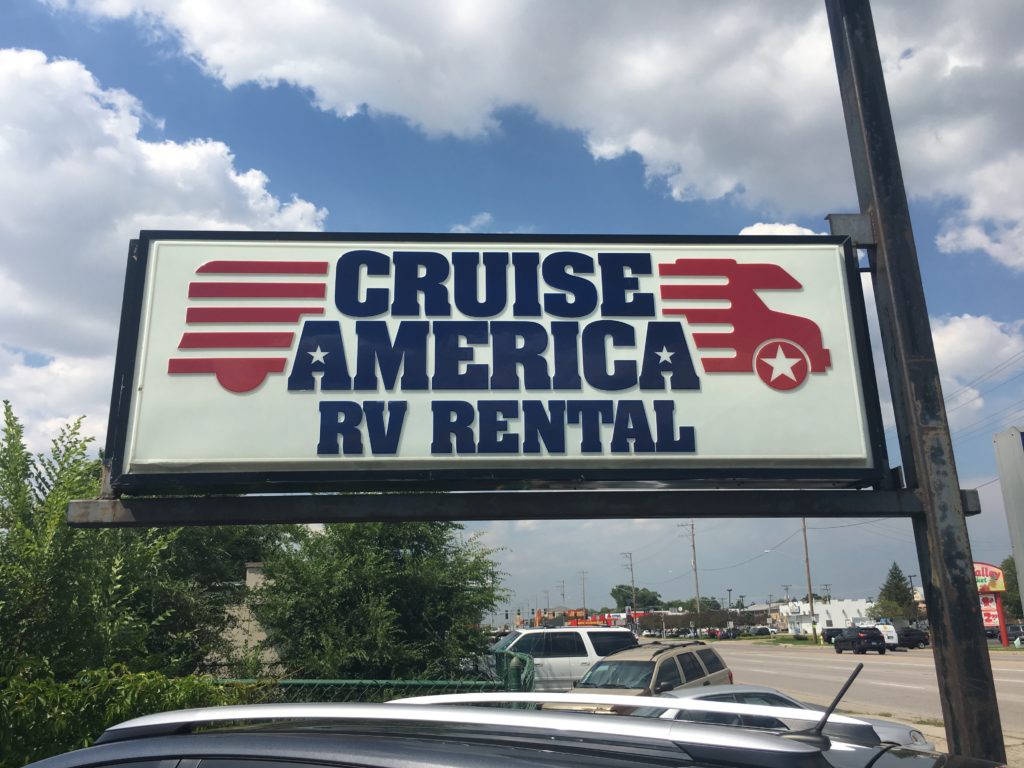 In July my husband Ian and I drove west from Chicago to the Mississippi River, with three kids and a dog in a rented thirty-foot RV. I like rivers and bluffs. I grew up in the Twin Cities, which are famously bisected by the Mississippi. There is an unglaciated area that cuts across northeast Iowa, northwest Illinois, southwest Wisconsin, and a corner of Minnesota called the Driftless Area. Covering 24,000 square miles, it was untouched by the glaciers that flattened much of the Midwest in the last ice age. It is missing the drift—the mixture of rocks and gravel, boulders and residue left behind by retreating glaciers. The geography is dramatically different from the Midwest that people think of as flyover land. One blogger says,

the Mississippi here looks less like a river and more like a series of interconnected lakes dotted with sandbars, narrow peninsulas, and forested islands. Looking across the water, into Wisconsin, a line of strangely shaped tall hills (or maybe small mountains) run along the shore—all severe, sharp angles covered in a fuzzy looking blanket of trees. It almost looks like somebody cut a patch out of Appalachia and dropped it into the middle of the prairie. 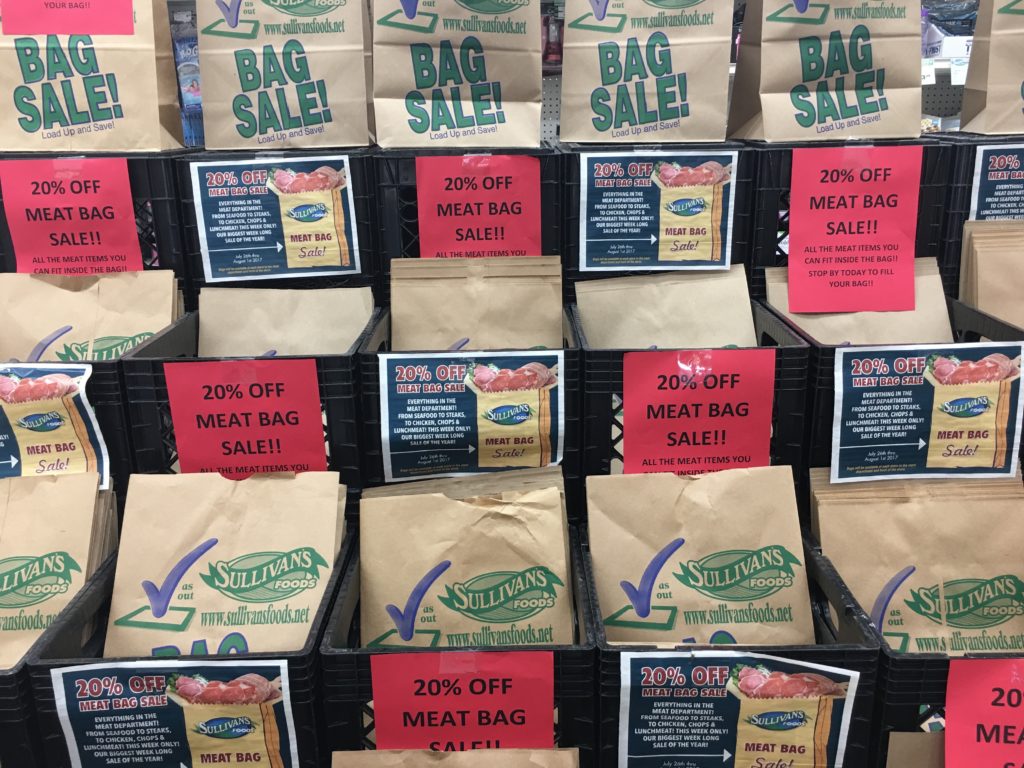 We needed groceries, and Sullivan’s Foods in Carroll County was advertising a sale: “20% off all the meat items you can fit in this bag.” The salad bar featured ham, Jell-O, and marshmallow, all in the form of “salads” that took me back to visits to my grandparents in Iowa in the 1970s. 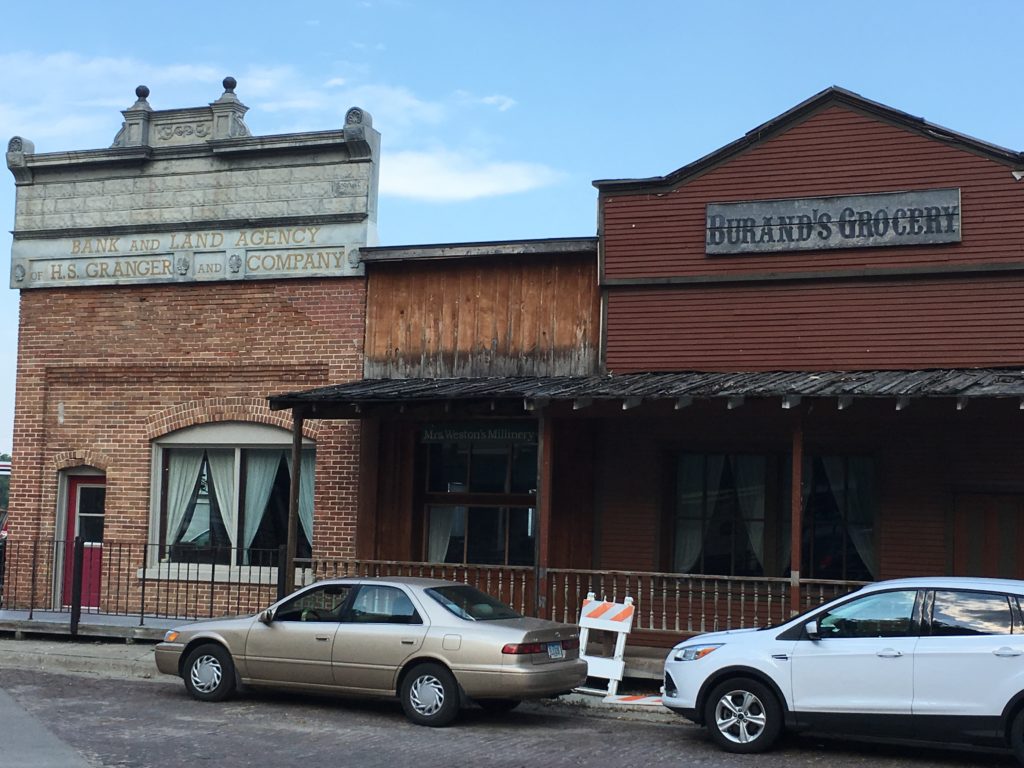 My parents drove down from St. Paul and met us at our campground in Prairie du Chien. There is a hilly little river town called McGregor on the other side of the Mississippi that touts itself as the original home of the Ringling brothers. In “Is That All There Is?” Peggy Lee sings about seeing their circus with her father.

We drove into McGregor, population 842, in our thirty-foot RV. According to the city’s website, “at the time McGregor got its beginning there were Sioux, Sac and Fox and Winnebago tribes roaming northeast Iowa. They rendezvoused and traded their furs with other fur trappers and buyers on the eastern shore of the Mississippi River at Prairie du Chien.” There was also “frequent warfare” among the tribes, although “after the Blackhawk War ended in 1832, the United States government opened up the great, unsettled expansion of land west of the Mississippi River in 1833. Government forts and military roads, fur trappers and traders, and the great pioneer spirit heading west helped to make McGregor an ideal spot for a ferry boat landing.”

We found RV parking right next to the town square. 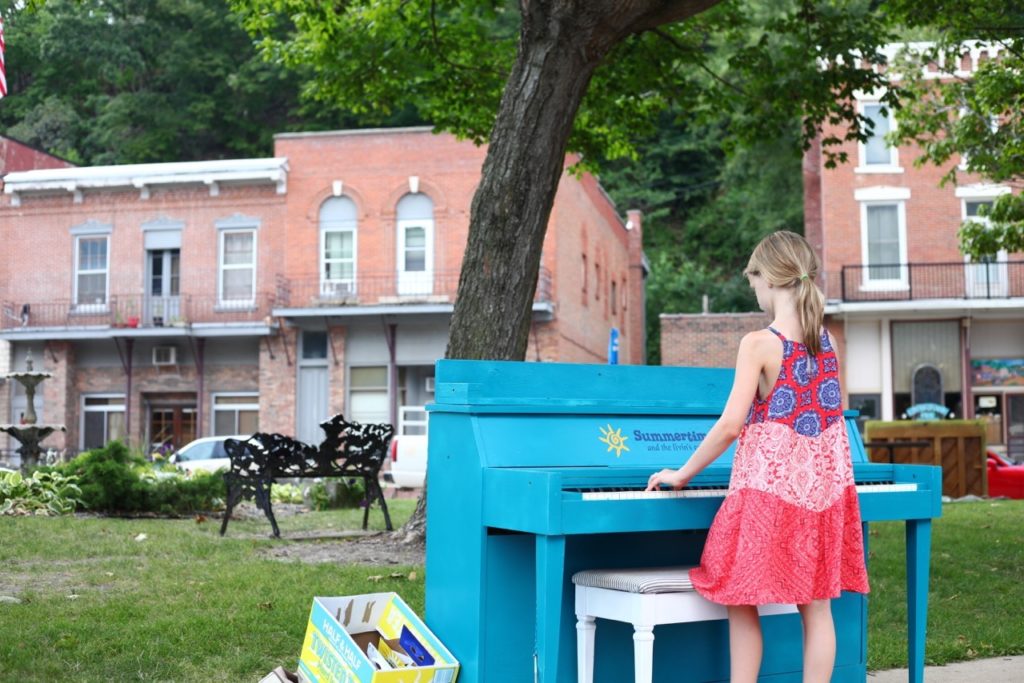 The public square had pianos set out for passersby to play and my nine-year-old tried one out. On the music desk someone had painted “Summertime and the livin’s good.” 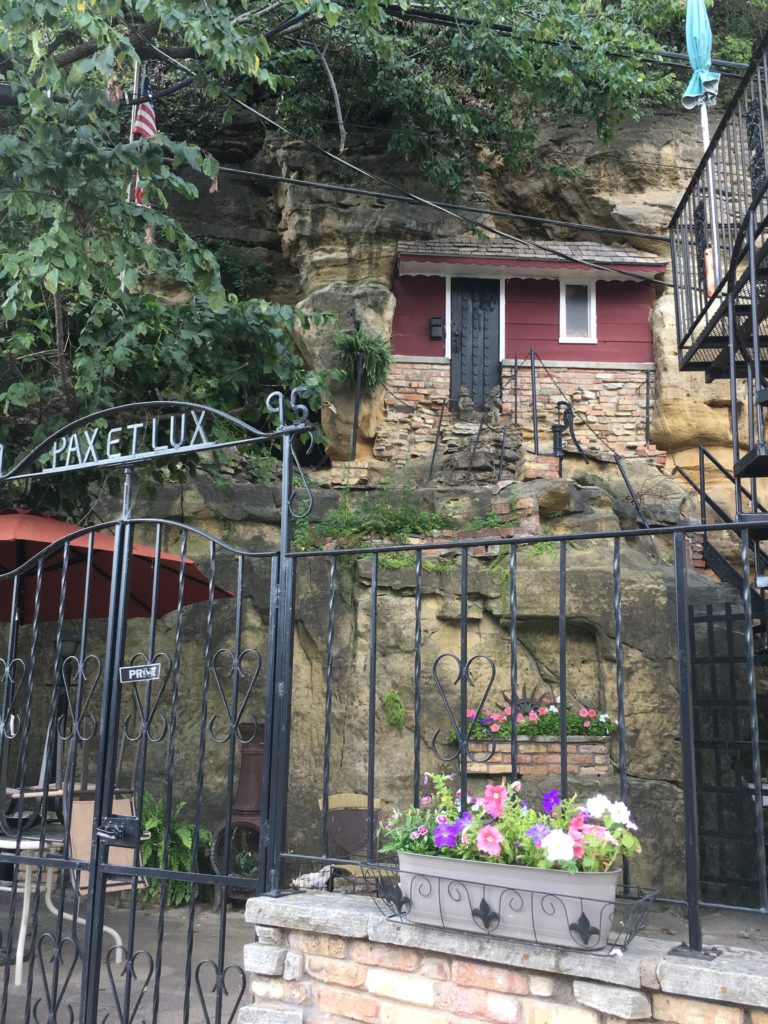 We bought local beer and chocolate and looked at a picturesque house built into a cliff originally used for cold storage. We drove back over the Mississippi where we had dinner at the local supper club. It was strangely dark inside but the salad bar had the biggest wheel of blue cheese I had ever seen.

On our third day the hot water in the RV stopped working. We did not think much of it; a friend had warned that troubleshooting was normal with RVs. We thought we would get by without hot water. How hard could it be? We showered at the campgrounds and made do with cold water for washing dishes and hands.

The next morning was hot, and while driving around on a fruitless search for a beach on the Mississippi we came across a Chicago-style hot dog stand, Dawg House Depot. It sat on the banks of the Mississippi across from a picturesque wall of cliffs. There was an appropriately patriotic hot dog on the roof, draped in an American flag, anointing himself with ketchup. 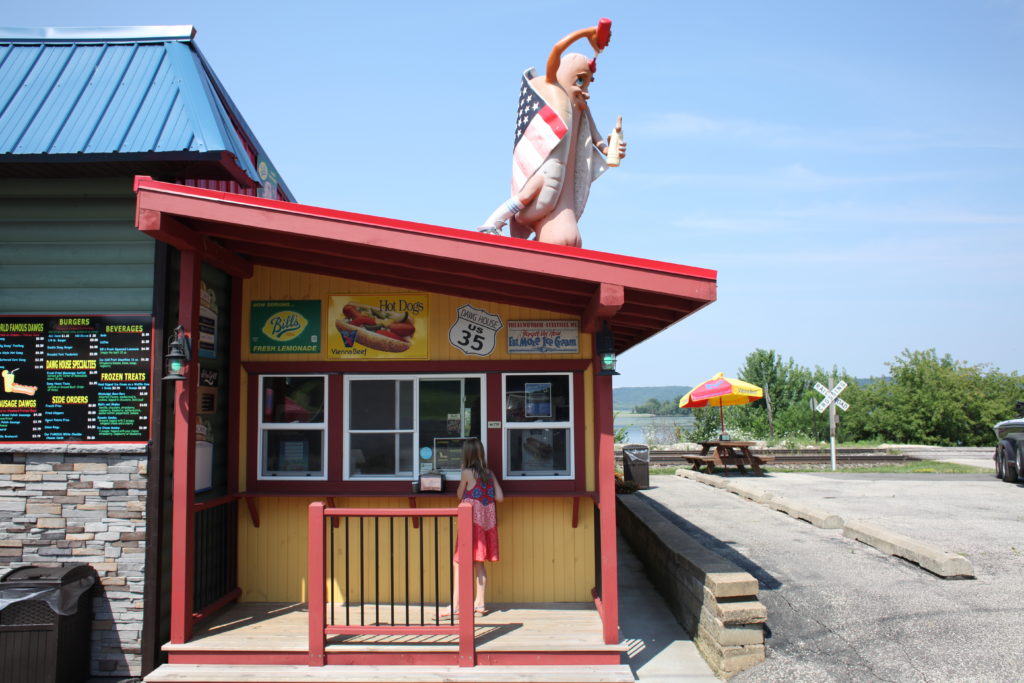 I welcomed the opportunity to sit by the river without being in it. The Mississippi had been disappointingly hard to access—muddy and mucky, with a riverbed that felt like quicksand and the banks mostly inaccessible. There were bugs. We had tried to swim at a campground beach but shied away after my daughter Sophie began to sink and got stuck, ankle-deep in the sticky black mud. The current was strong. 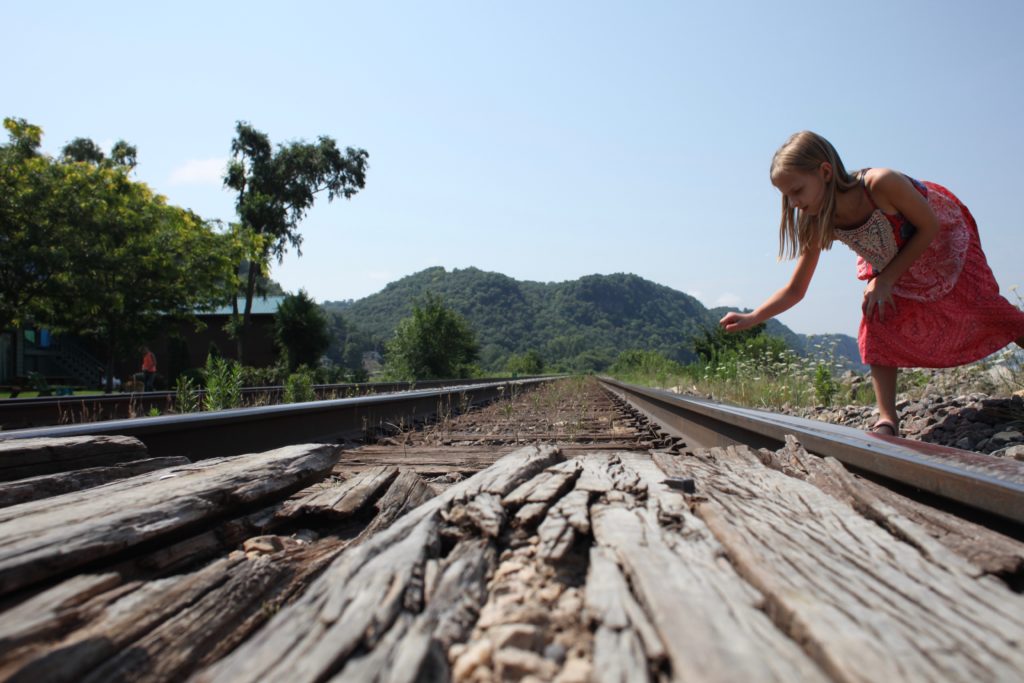 A train track lay between the Dawg House stand and the riverbank. These were the real thing, seemingly endless freight trains, very different from the El we were used to at home. We could feel a train rumbling toward us from miles up the track. Ian suggested one of our daughters place a coin on the track and step back to wait for the train. We climbed over the tracks and down to the boat launch at river’s edge to wait for the train to pass. We never found the coin, but stayed to watch a barge drift by, impossibly long and slow. 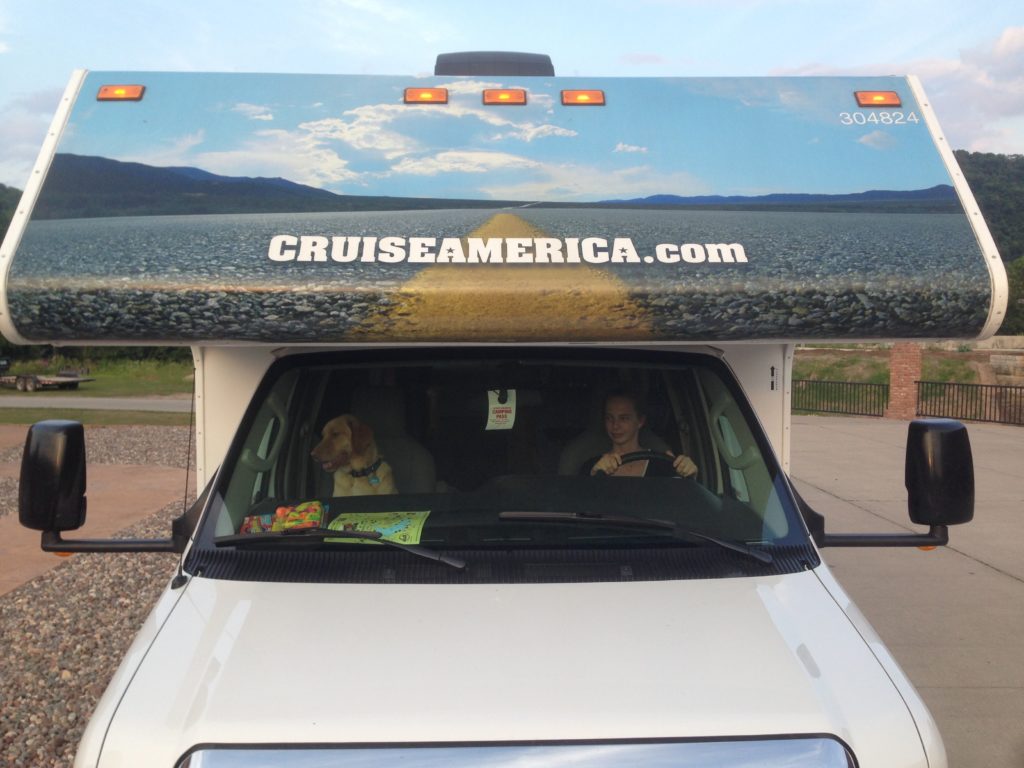 It turns out you do not need a special license to drive an RV, but you do have to be at least twenty-five years old. Our oldest, age fifteen and armed with a learner’s permit, made a convincing plea. In Starved Rock State Campground in central Illinois on the last night of our trip we let her steer for twenty feet in a lane set apart from the road. Our Labrador retriever, Jake, navigated—a job he took seriously throughout the trip but especially with Ally at the wheel. Ian emptied the sanitation tank while we waited. We still had no hot water.

It may have been at that station that Ian picked up whatever would send him to the doctor in Evanston a few days later with an infected hand, long red stripes trailing up his arm to his lymph node, sleep-deprived, his hand swollen to an unrecognizable size. “Go straight to the ER,” said the doctor, “you need an IV, antibiotics, right now. You’ve got a classic case of cellulitis. We don’t often see a perfect case like this, so expect all the interns to come around to have a look.” There was talk of keeping him overnight. I was disappointed: we had planned a getaway to an inn and spa as R&R after the RV adventure. Ian assured the doctor he would keep an eye on it. “Send me a photo if it gets worse,” she said, and let him go. On the banks of a different river, the Fox, just the two of us, it got better.