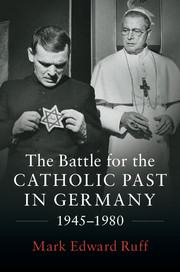 Beginning already in the late 1940s, doubts about the moral fitness of Catholic bishops, cardinal secretary of states, and pontiffs of the Nazi era were cascaded before the public. They screamed from front-page headlines, the magazine covers of the most influential newsweeklies, the glossy covers and pages of illustrated magazines like Der Spiegel, and the bestseller lists in Germany and the United States. Protests, riots, and boycotts involving tens of thousands of angry souls served as magnets for the lenses and recording devices of newspaper, radio, and television journalists from both sides of the Atlantic. By comparison, similar criticisms of the moral righteousness of Protestant church officials came with a mute. More often than not the province of specialty scholars and dissident theologians, critique of the Protestant leaders could only occasionally be heard over the din accompanying the critical assault on the personae of the Catholic ecclesia and their pasts.

Why did the alleged sins of the Catholic Church ring so much louder than those of their Protestant brethren? This has been a guiding question for my new book, The Battle for the Catholic Past in Germany, 1945–1980, since by most objective yardsticks, the German Protestant leadership left behind a more troubling record of collaboration than their Catholic counterparts. Between ten and twenty percent (in some states more than half!) of Protestant clergy, and not just members of the German Christians, had formally joined the Nazi Party or ancillary organizations like the SA. We now know that even celebrated resisters in the oppositional Confessing Church bought into much of the ideology and anti-Semitism of the Nazi regime. By contrast, less than one percent of Catholic clergy joined the Nazi party, and the worst of the “brown priests” were often reprimanded for their excess zeal.

There are several simple but ultimately unsatisfying answers to why the majority of critics opted to pontificate on the past of Germany’s religious minority whose sins in marked contrast to those of the Protestant majority were more frequently deemed to be of omission than of commission. It is easier to make sense of the Catholic Church’s apparent moral failings. Everyone can play the expert. It is a universal church. Its structures are tidily hierarchical; its bishops, cardinals, and pontiffs were household names, celebrities even, and archetypes of authority. In contrast, there was no Protestant pope to command public attention. How then could the media distill Protestant conduct from twenty-eight jumbled state churches into two-thousand-word articles, let alone encapsulate it in attention-grabbing headlines?

In light of this, some critics argued that the Catholic Church had a greater guilt to expunge. Well-respected Protestant theologians contrasted their church’s Stuttgart Declaration of Guilt from October 19, 1945 with the absence of a comparable Catholic statement. They also pointed to differences in the respective structures of the ecclesia to argue that the centralized Catholic Church could have and should have done more. The thirty-two-year-old playwright Rolf Hochhuth powerfully claimed in The Deputy, his explosive debut work of 1963, that Pope Pius XII as Christ’s deputy on earth and the apex of a powerful hierarchical organization had signally failed in his duty to denounce the Nazi regime and its genocidal mania. The pope, Hochhuth let one of his protagonists claim, might even be a “criminal.”

My book provides a fundamentally different explanation for the disproportionate focus on the Catholic past. It argues that the controversies over the church’s relationship to National Socialism in the early decades of the Federal Republic of Germany were proxy wars over a larger set of conflicts over how the church was to position itself in modern society—in politics, international relations, the media, and the public sphere.

In West Germany, these proxy wars tended to center on church-state relations. Crucially, these were problems arising from the postwar political ascendency of Catholics and the integration of Catholic citizens into the mainstream of their society. West Germany’s dominant party through the 1960s, the Christian Democratic Union (CDU), though officially interconfessional, was Catholic-dominated. Its leading chancellor, Konrad Adenauer, was Catholic; the party rank and file was largely Catholic; and the ecclesiastical hierarchy typically lent the party its support, tacit or overt. Above all, it was perceived as a Catholic party.

As Catholic political leaders pursued agendas anchored in confessional priorities, opposing memories invariably resurfaced of a violent century in which divisions between Catholics and Protestants had been woven into everyday life. Fueling these conflicts were divergent understandings of what had been done both by Catholics and to Catholics during the frequent intervals of political upheaval between 1870 and 1949—during the Kulturkampf era, during the tumultuous Weimar Republic, and of course during the Nazi era. As Catholic and Protestant political and intellectual leaders reflected on what it meant to live together under the same political roof, their attention was inevitably directed back to those years and eras of confessional conflict jarring ecclesiastical life ever since German unification in 1871 under Bismarck. At the heart of these was an undeniable reality that had shaped both prejudice and persecution: Germany had been and remained a majority Protestant nation. This reality not only rankled but shaped perceptions and the debates between politicians, churchmen, journalists, scholars, and laity about the Catholic Church’s past during the Nazi era.

Much of the substance of my book explores how debates about the Church’s past from 1945 to 1980 arose directly out of the charged political landscape of the early Federal Republic. It begins by showing how Allied policies of denazification and war crimes trials shaped the early attempts to document the Church’s past. But these Allied policies affected both churches, and both churches evinced similar aggrieved defensive responses against accusations of collective guilt or that the churches had done too little to oppose Nazi rule.

What initially led to the asymmetrical focus on the Catholic Church’s past was a seemingly unrelated dispute, one with deep roots, over whether German public schools could be segregated by religion (Bekenntnisschulen). The CDU and the Church had attempted to insert a provision into the West German constitution enshrining parents’ rights to request such schools for the children. These efforts failed because of opposition from German liberals, socialists, and Communists, and, taking their cue from Pope Pius XII, church leaders pursued another option. They argued that the Reichskonkordat from July 20, 1933, which had guaranteed the right to the schools, remained legally binding. This treaty had been signed both by Hitler’s government and Cardinal Secretary of State Eugenio Pacelli, the future Pope Pius XII. Both the Social Democratic Party (SPD) and the Free Democratic Party (FDP) disputed this claim, forcing the issue to be resolved in a landmark case on June 4-8, 1956 by West Germany’s highest court, the Constitutional Court.

Both sides to the case were forced to dig into the treaty’s origins. They encountered uncomfortable documents and evidence, raising questions that would haunt church defenders for years to come. Each had to assemble networks of legal experts, politicians, journalists, and a smattering of historians to launch and promote research into the legality and history of the Concordat. On the one side were Catholics in the CDU and CSU; on the other were liberals in the FDP and socialists in the SPD, most of whom were Protestants. Future battles over the Catholic past thus lay neatly along the ideological fault lines of the early Federal Republic. 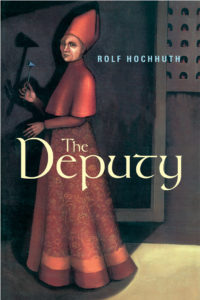 The most dramatic criticism was generated by Rolf Hochhuth’s play, The Deputy, beginning with its premiere in West Berlin on February 20, 1963. The aggrieved reaction, which manifested itself in countless protests, polemics, and even lawsuits, transformed debates about the Church’s past into something else—debates about freedom of expression, civil liberties, and tolerance, when in the early-to-mid-1960s societal attitudes on these subjects were fundamentally shifting. And in nearly all of these debates, the rule held: the exposure to contrary claims and/or evidence tended to inflame rather than temper. Describing the range of tactics, from sophisticated to crude, with which these culture warriors dealt with claims and evidence that ran contrary to their message has provided much of the substance for this book. In most cases, there was abundant contrary evidence—and how could there not have been, even within a church best known as a bastion of conservatism and anti-modernism?

Why did the exposure to contrary evidence and points of view so often lead to the closing of ranks and minds instead of the reverse? This book ultimately argues that the overwhelming majority of those entering into these debates were driven by present-minded concerns, even where almost all sincerely professed their commitment to principles of historical objectivity. Their lines of inquiry were accordingly shaped by traumatic experiences during the Third Reich, religious convictions, political agendas, social pressures, and above all, by the need to combat ideological adversaries. Though the ensuing debates often centered on the legitimacy of the historical methodologies employed, at the heart of these controversies between 1945 and 1980 were the perceived ideological baggage of the combatants and the present-minded manner in which leading questions had been framed.

Since the ideological and confessional fault-lines that originally animated these debates are largely a thing of the past, it is my hope that the time is finally ripe to historicize these thirty-five years of strife over the church’s conduct during these twelve years of revolution, dictatorship, war, and genocide. Doing so not only sheds light on how political parties, religious leaders, and intellectuals crafted narratives about the past to justify their own visions of what the church’s role was to be in the fledgling West German state and modern society. It allows a past so often painted in black and white to be restored to the shades of grey that better correspond to the messiness of the religious experience under a brutal and ultimately anti-Christian dictatorship.

Mark Edward Ruff is professor of history at Saint Louis University. A historian of religion and modern Europe, he has written widely on secularization, church-state relations, and the history of the churches under Nazi rule. He is the author of two monographs, including The Wayward Flock: Catholic Youth in Postwar West Germany, 1945 - 1965, and the coeditor of two collections of essays. He also serves as a church organist.