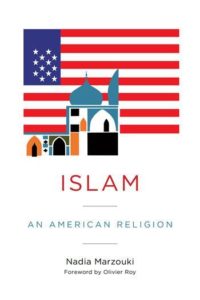 Nadia Marzouki’s Islam: An American Religion is one of the most exciting books I have read on Islam in the United States recently. It is, in my opinion, the best available piece of scholarship with which one could think about Islam in contemporary American politics. Multiple arguments run through this rich and nuanced book. But buried beneath the surface of the chronology of the chapters lies a narrative of how anti-Muslim polemics have evolved since 9/11 to shape politics in America today. Marzouki acknowledges that anti-Muslim polemics, “as absurd, burlesque, and shrill as they are,” nonetheless, “produce positive effects” that have shaped American politics, law, and culture since 9/11. Her emphasis is less on outlining their evolution and more on the way they repeat longstanding debates regarding the utility of liberalism in building a diverse political community.

I suspect that Marzouki emphasizes the circularity rather than the evolution of anti-Muslim polemics because to emphasize the latter would suggest that anti-Muslim polemics may have an explainable logic to them. She maintains that they are beyond explanation largely because they rely on the false notion that there is a homogenous white Christian community that is threatened by the practice of Islam in the United States or that Muslim Americans are a victimized or dominated community. Neither of these claims bear out in her empirical research into contemporary debates about Islam. “It is precisely this lack of consistency,” Marzouki writes, “that makes equality possible and renders vain all explanatory projects.”

By drawing attention to the evolution of anti-Muslim polemics since 9/11, I do not mean to counter Marzouki’s assertions about the lack of coherency in controversies surrounding Muslims today. Rather, I hope to push back against the idea that there is no logic to this madness, particularly in light of the role anti-Muslim polemics played in mobilizing support for the election of Donald Trump, which occurred after Marzouki completed her book.

In her first chapter, Marzouki shows that the controversies surrounding Islam have less to do with practices and teachings and more with the ambiguity of what constitutes “religion” under the protections afforded by the First Amendment. Given this ambiguity, Marzouki argues,

Religious minorities will thus have more trouble convincing others to consider different conceptions of the category ‘religion’ as normal or acceptable . . . . If today Muslims are particularly targeted, similar questions have been asked about all religions . . . . [T]oday’s controversies about Islam cannot simply be understood as expressions of hostility toward Muslims since September 11. They are rather, part of a long and complex history of questions and debates over the First Amendment.

The upshot of situating anti-Muslim sentiments in the context of the difficulties involved in managing religious freedom through the Bill of Rights is that Islamophobia in and of itself cannot be taken as an explanation for why Muslims are targeted for discrimination and prejudice. Anti-Muslim groups “may be influential,” Marzouki reminds her readers, “but they are not all-powerful . . . . American law remains the surest guarantee of the rights of minorities, and notably Muslims. The shouting from Islamophobes has gotten loud, but their media impact stands in inverse relation to their legal victories, which have been rare.”

Given the centrality of the legal system in protecting Muslim civil rights, I see in Marzouki’s next two chapters an overview of the strategies employed in anti-Muslim discourses and activism to overcome legal protections for Muslims. Chapter 2 on mosque controversies shows how, in the shadow of the national controversy about the building of a mosque near Ground Zero, anti-mosque polemics adopt a notion of “popular sovereignty” to counter any legal defense of mosques based on property rights and religious freedom. Citing Mateo Tassig-Rubbo, Marzouki explains, “‘If the regime of private property causes the sovereign to recede into the background behind a world of law, the 9/11 attacks, violating the sovereign’s control over space and violence, reconjured it.’” By associating the building of a mosque near Ground Zero with popular sovereignty, anti-Muslim polemics render mosques, and any legal argument in their defense, a threat to the ability of “ordinary Americans” to feel at home in their own country.

The only reason, however, that Muslim Americans could be deemed a threat in this way is because the nation has been divided in its response to 9/11. On the one hand, there is a liberal response that seeks harmony through social contract and legal processes. On the other is an anti-liberal response that seeks social harmony through sacrifice, intimacy, and nationalism. Anti-mosque appeals to popular sovereignty thus help establish an effective means of defining political community beyond the realm of the law or any social contract.

The anti-Shari‘a movement (discussed in Chapter 3), which followed the Ground Zero mosque controversy, similarly targets Muslims’ rights as citizens by using state legislatures and ballot measures as means of subordinating the courts to the will of the people. As a matter of fact, there is no reason for anti-Shari‘a legislation in the United States. Religious laws cannot override state or federal laws in the courts, and outside of the court, the right to exercise one’s religion according to its precepts is guaranteed by the First Amendment. As Marzouki asserts, “the stakes of the legal battle are, above all, political. The objective is to prolong the controversy over Islam in order to situate the debate with arguments hostile not only to Muslims but, more importantly, to the Obama administration, the Democratic Party, and a certain conception of liberal democracy . . .,” one that would recognize Muslims as citizens with equal rights.

While anti-mosque and anti-Shari‘a polemics appeal to the will, feelings, and sovereignty of “the American people” to pose Islam as a threat to “the survival of America,” the coherent populace they evoke does not exist and needs to be constructed. In her fourth chapter, Marzouki, relying on Michael Kazin’s work, shows that “populism is not so much a political strategy or social collective as it is a type of rhetoric” intended to enact mass mobilization, as evidenced by the rise of the Tea Party. Marzouki argues that the mass appeal of the far-right lies in their call for individualism, “common sense,” and their fostering of social paranoia in politics. But given that they offer no concrete solutions and eschew the mediation of power through governmental institutions, it is difficult for me to see how their ideas could have the widespread traction that they do had anti-Muslim polemics not been successful in popularizing paranoid politics and instilling a sense of loss in the nation.

In her last chapter, Marzouki enquires into the role Islam plays in debates about American foreign policy. But in my attempt to thread the evolution of anti-Muslim polemics since 9/11, the question that interests me is whether or not the national unity lacking in domestic debates about Islam manifests itself in the way America projects itself abroad. The answer seems to be a partial yes. While there is no consensus on the role of Islam in US foreign policy nor on the way in which religious freedom ought to be defined abroad, anti-Muslim groups who challenge legal protections of Muslims as a minority community at home are very willing to join liberals in advocating for legal protections of religious minorities, particularly Christian-minority communities, in other states. Their recognition of this right is in turn changing the way religious freedom is conceptualized in America.

Marzouki mentions how Catholic and evangelical leaders successfully turned the initial requirement for contraception benefits in the Patient Protection and Affordable Care Act of 2010 into a constitutional issue about freedom of religion. They pushed to extend the notion of religion beyond private beliefs of individuals to recognize the public practice and institutional demands of religions. In a manifesto published in First Things in 2012, they argued that,

Proponents of human rights, including governments, have begun to define religious freedom down, reducing it to a bare ‘freedom of worship.’ This reduction denies the inherently public character of biblical religion and privatizes the very idea of religious freedom, a view of freedom such as one finds in those repressive states where Christians can pray only so long as they do so behind closed doors.

This statement is interesting because a common argument in anti-Muslim polemics is that Islam is inherently a public religion and therefore cannot accommodate the Establishment Clause.

In light of this, the comparison made between notions of religious freedom in America and other oppressive states (likely reference to Muslim-majority states and China) shows how anti-Muslim polemics, over time, have shaped the terms of public debate about religion to such an extent that conservative Christians use terms by which Islam has been denied recognition, to ironically justify the public role of Christianity in America.

Kambiz GhaneaBassiri is professor of religion and humanities at Reed College. He is the author of A History of Islam in America: From the New World to the New World Order and the founding coeditor of the Islam of the Global West book series.