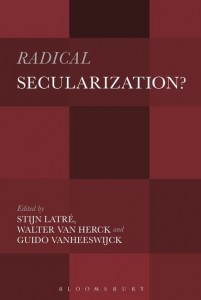 Against this intriguingly ambiguous conceptual background, the book explores the theme of secularization in two parts. The first part is devoted to a recapitulation and fresh evaluation of the classic Löwith-Blumenberg debate. Jean-Claude Monod recalls Karl Löwith’s continuity thesis and Hans Blumenberg’s well-known criticism. With regard to the debate’s continued effect, it becomes clear that the issue of the independence of secular modernity from Christianity (or its lack) has turned from an internal Western quarrel to a global affair whose main concerns have become whether Western categories, including “secularization,” have any legitimate applicability in non-Western contexts and whether the West’s aspiration to spread democracy and human rights throughout the world is to be viewed as a secularized form of proselytization. Willem Styfhals further illuminates this issue by discussing Löwith’s thesis that the modern notion of progress is a secularized (and distorted) version of eschatology. By undertaking “an exploration of eschatology’s ontological ground structure,” Styfhals points out that Löwith’s thesis implies that the modern understanding of history is based on the originally Christian idea of radical evil, from which humanity needs to be liberated. The inherent notion of salvation is conceived immanently by modernity, but that only means that it gives a different—in Löwith’s view, “anti-Christian” (and potentially harmful)—answer to a problem “that is fundamentally entwined with the Judeo-Christian tradition.” In other words: There is “a substantial continuity of ontological problems between premodern and modern thought”—a view of modernity which Blumenberg rejects, of course.

But the contribution by Herbert De Vriese makes clear that contemporary genealogical accounts of secularization, such as Charles Taylor’s or Marcel Gauchet’s, reinforce the continuity thesis, albeit without reproducing the classical connotation of secularization as a category of “historical illegitimacy.” Instead, De Vriese argues, these theories institute secularization as a category of “historical entitlement,” which means “that religion, and more particularly the Christian religion, has a legitimate claim to key elements of modern culture and may justifiably recognize and accept them as its own offspring.” While this shift from “illegitimacy” to “entitlement” might have conciliatory effects as far as the relationship between Christianity, secularization, and Western modernity is concerned, it tends to aggravate the debate on the global level because it raises serious questions regarding the “entitlement” to modernity outside the Christian West.

In the second part of the book, recent influential genealogical analyses that strive to explain the process of secularization and the rise of secular modernity are discussed. Many contributors focus on the accounts by Marcel Gauchet or Charles Taylor or a comparison of the two. André Cloots takes a closer look at Gauchet’s understanding of secularization as “disenchantment” and its relation to modernity. Andreas Michel examines the crucial role of the doctrine of incarnation in the process of secularization according to Gauchet and Gianni Vattimo and compares their different takes on this issue. Taylor’s account of secularization is the subject of the contributions by Charles Lockwood and Gerbert Faure. They deal with the charge of apologetics against Taylor’s A Secular Age and Taylor’s resistance against external, purely functional conceptualizations of religion, such as the one offered by Gauchet.

John Milbank critically discusses Gauchet’s account of secularization at length, particularly targeting his claim regarding an eventual release of the purely political and its complete independence from any religious impulse. In an attempt to counter what he sees as Gauchet’s “modern prejudices” and “neo-humanism,” he appeals to Taylor. But this attempt at fraternization must fail. Milbank’s—certainly disputable—presentation of classical Christianity as the real safeguard of religious liberty and “freedom as such,” by which he means to justify “a certain primary ‘establishment’ . . . of Christianity” in Europe today, is clearly in disharmony with Taylor’s pluralistic vision of modern (post)secular society, in which Christianity is a viable option among others but cannot reign supreme. This crucial difference between Taylor’s plea for pluralism as against the monist solutions of radical orthodoxy defended by Milbank or Brad Gregory is also addressed and acknowledged by Guido Vanheeswijck in his contribution.

The penultimate essay by Stijn Latré brings Karl Jasper’s notion of the “Axial Age” to bear upon the debate about secularization. He compares Robert Bellah’s and Gauchet’s (often convergent) views on the “axial revolution” and what it meant for the evolution of religion and politics. The volume ends with Laurens ten Kate’s “conversation” with a number of contemporary thinkers on secularity and the (alleged) return of religion and the “axial dilemma,” engaging with Jean-Luc Nancy, Hannah Arendt, Jürgen Habermas and Étienne Balibar, alongside the philosophers already mentioned.

In order to appreciate the great merit of the book, it is helpful to start by a distinction offered by Herbert De Vriese, who differentiates a philosophical and a sociological debate on secularization. Sociological theories of secularization have long been premised on the assumption of an eventual decline of religion in modern societies. Only recently, there has been a paradigm shift which involved the realization that religion is here to stay, as well as a new awareness concerning the entanglement of secular modernity with (Christian) religion. What this book powerfully shows is that these “new” insights had been there all along—but in the philosophical debate on secularization, which has always been aware that modernity cannot be understood without paying due attention to its genealogical dimension. The recent return to grand narratives, as exemplified by the monumental works by Gauchet, Taylor, or Bellah, testifies to a renewed appreciation of this actually well-known fact.

Moreover, in the sociological debate, the new awareness concerning an intrinsic relationship between secular modernity and Christianity came about mainly through the interventions of postcolonial thinkers influenced by postmodern, Foucauldian philosophy. The resonances of their ideas with those of the classical thinkers in the philosophical debate, such as Karl Löwith, are striking. Pointing to a passage in Jean-François Lyotard’s 1993 book, Moralitées postmodernes, which reads like a reformulation of Löwith’s main thesis, Monod aptly observes “it is as if postmodernism were already there in 1949.” These parallels between (neo)classical genealogical and postmodern approaches to the subject of secularization can also be recognized in Taylor’s A Secular Age, where the second chapter, “The Rise of the Disciplinary Society,” reads in large part like Michel Foucault’s Discipline and Punish. And considering Walter Van Herck’s essay in this volume about the history of “religion” and “belief” makes clear that a postmodern, genealogical re-/deconstruction of “religion,” which is associated in today’s social sciences with the more or less recent works of Talal Asad, has already been put in place in 1962 with Wilfred Cantwell Smith’s seminal study The Meaning and End of Religion.

The great merit of Radical Secularization? is that the book provides a wide array of analyses which deliver deep insights in the rich philosophical debate on secularization, from which the social sciences have much to learn. It opens up the possibility for a new conversation between scholars rooted in the sociological and the philosophical perspective, respectively, and thus gives a chance for the kind of fruitful “impurity” in analysis that often yields the most intriguing results.

Ulrike Spohn is a lecturer in political theory at the department of political science at the University of Münster, Germany. She received her doctoral degree from the University of Münster in 2016. In her dissertation, which was published by Campus in the same year, she drew on Charles Taylor's writings about secularism and on postcolonial perspectives to criticize concepts of public reason advanced in liberal political theory. Her research interests include political theory and social theory with a special focus on questions concerning religion and politics, modernity, cultural diversity, and postcolonial constellations.