God in the Enlightenment 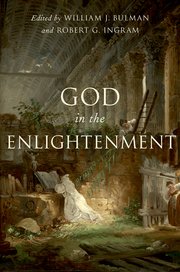 In a speech before the Brexit vote, Boris Johnson offered a controversial historical pedigree for his campaign to leave the European Union. He insisted that the Leave campaign members were not all backward Little Englanders but rather deserved the reputation as the real upholders of the “liberal cosmopolitan European enlightenment.” He and his colleagues inherited the tradition, he claimed, because they too were “fighting for freedom.” An interview Johnson gave a year earlier, when he claimed that London and Paris shared a commitment to “enlightenment and freedom,” offers some indication about what that “freedom” entailed. He described how these values assured the right to open expression, even when that expression might critique religions and provoke “would be . . . jihadis.”

Johnson’s evocation of the Enlightenment testifies to the continual contest over its political meaning and to its deep associations with anti-religious critique. The contributors to God in the Enlightenment, edited by William Bulman and Robert Ingram, offer nuanced narratives to articulate a “usable” Enlightenment whose meaning can help us arrive at a more sophisticated understanding of the relationship between religion and secularity in public debate.

Since Paul Hazard published his monumental account over eighty years ago, the sweeping narratives of the Enlightenment have consistently characterized the late seventeenth and eighteenth centuries as the turning point on the path to secularization in Christian Europe. Most recently, Jonathan Israel has offered a tirelessly comprehensive version of such an account, which posits a transformative Enlightenment rooted in the atheistic philosophy of Baruch Spinoza.

Scholars have subjected all this to considerable critique, primarily by chipping away at particular episodes in the narrative rather than advancing an alternative. Bulman describes God in the Enlightenment as a correction to that approach by synthesizing several historiographic trends into a narrative capable of challenging that “liberal, secularist, and philosophical Enlightenment.”

Bulman and several of the contributors begin by shifting the periodization to locate the Enlightenment earlier, to the middle of the seventeenth century at the conclusion of the Thirty Years’ War and the English Revolution. This shift underlines how the bloodshed of these religiously-inflected wars rendered political roadmaps to civil peace urgently necessary. Thus Justin Champion traces Thomas Hobbes’s and John Locke’s competing visions of “laïcité” as solutions to the same question that exercised all Enlightenment thinkers—how to prevent the religious bloodletting of the early seventeenth century. The pervasiveness of the intellectual concern with religious tranquility manifested itself in Christian apologetics through the increasing emphasis on the “social usefulness” of organized religion. Anton Matytsin traces this trend in his essay by focusing on French Catholic apologists who countered anticlerical arguments not simply by citing revealed truth but rather by insisting on religion’s unique capacity to instill civil sociability.

By embedding the beginning of the Enlightenment earlier in the seventeenth century, the essays also highlight the continuity of “late humanist” scholarly disciplines and practices in the intellectual culture of the period. The geometrical rigor of Spinoza’s philosophy did not cut down historical scholarship and Biblical exegesis to make a more lean learned discourse in the Enlightenment. Rather, those scholarly traditions provided the vocabulary for writers to debate across confessional lines.

This view of an “erudite Enlightenment” focuses attention on debates within established churches and universities, such that Spinoza’s sharp distinction between rational philosophy and revealed theology emerges as an outgrowth of Dutch Reformed debate on Biblical hermeneutics, according to Jetze Touber. Such debates among theologians ascend to higher prominence in this view; Paul Lim illustrates how fierce disagreements over the nature of the Trinity drove interlocutors to parse Greek philosophy from primitive Christianity in the scriptures.

This reconsideration of historical and philological practices as intellectually generative allows a more sophisticated and satisfying account of the contribution that travel writers, ethnographers, and ethnologists who vividly described the non-Christian “other” made for the Enlightenment. Claudia Brosseder details how scholars like the Peruvian theologian Bernabé Cobo turned to the ancient tradition of Aristotelian epistemology to understand why Amerindian peoples fell into idolatry. The effort to explain the customs (and later “religions”) of peoples outside Latin Christendom delivered arguments that could both reinforce and critique sacred institutions in Europe. Joan-Pau Rubiés documents this shift from a “comparative antiquarian apologetics to a comparative libertine anthropology of religion” in descriptions and analyses of Hinduism, first by Jesuit scholars and then by Freethinking controversialists.

That move from Christian apologetics to anticlerical critique paralleled the partial migration of intellectual debate from the universities to the “Republic of Letters,” constituted by journals and reviews. Several essays in God in the Enlightenment take up this focus on new media and their capacity to convey new conceptions of God and God’s immanence, not just denials or defenses of the existence of God. When Richard Bentley turned his philological acumen to produce a revised edition of Paradise Lost in 1732, it turns out he carefully redacted any suggestions that John Milton’s materialism left no space for God, as Sarah Ellenzweig describes it, lest his readers confuse Christian Newtonianism with dangerous Spinozism. Likewise, H.C. Erik Midelfort illustrates that atheistic philosophes enjoyed no monopoly on naturalistic explanations through his analysis of a German physician who recorded medical criteria for determining the appropriateness of either medical or spiritual prognoses for purported possessions.

The volume does not offer only one account of how conceptions of God and God’s relation to the world changed. For Brad Gregory, the Enlightenment ushered in “natural-theological, deistic, pantheistic, and atheistic theorizing about God” only because it inherited a theological tradition from the Middle Ages that rendered God a being existing in nature who could be sidelined with each development in natural science. J.C.D. Clark, however, resists the argument that understandings of God and God’s attributes radically changed through the Enlightenment. Jonathan Sheehan offers an alternative route around this contrast by focusing on the introduction of new questions about the relation of God to creation, not just new answers. He cites the preeminent appeal of the biblical book of Job to Enlightenment readers, illustrating how they increasingly sought answers to questions about the possibility of God’s justice in an uncertain world saturated by news of the financial bubbles and natural disasters that could destroy a believer’s fortunes from a world away.

From the diversity of conceptions of God to the centrality of religious peace in political philosophy, Bulman pulls these narrative threads together in his introduction to provide an account of the Enlightenment that challenges the standard story of secularization. The synthesis he offers, however, preserves an important place for “elite secularity.” This secularity was not a decline in belief or separation between crown and altar, but rather a pervasive recognition among the learned that their own confessional commitments were some, among many, choices that “sane people” could hold, even if incorrectly. The Enlightenment therefore encompasses those solutions to the problem of religious conflict that acknowledged and thereby advanced a culture of elite secularity.

This articulation of secularity speaks to the volume’s engagement with recent literature that proposes more nuanced relations between religion and secularity. Bulman acknowledges the debt owed to Charles Taylor’s A Secular Age, which identifies secularization with the advent of the conditions that make unbelief possible, rather than the proliferation of unbelief itself. Thus theologians could unknowingly contribute to secularization by advancing historical and philological arguments to convince their counterparts of the truth of their position, knowing such arguments transcended confessional difference and could even convince hypothetical—and later, real—atheists.

The central position that the demands of cross-confessional debate take in this account brings the authors in close proximity to Jeffrey Stout, whose Democracy and Tradition roots the secularization of public discourse in the plurality of religious traditions that interlocutors embrace and the demands which that diversity places on participants to take no theological commitments for granted. The authors and editors incorporate these theories to tell more sophisticated accounts of how theologians, including conservative ones, could uphold and even advance the secularity associated with Enlightenment. In return, they supply rigorous historical narratives to replace the mostly conjectural origin stories that Taylor and Stout offer.

The commitment to Taylor’s approach to secularity as the set of conditions that make the experience of “implicit faith” impossible binds Dale Van Kley’s comprehensive synthesis in his conclusion to Bulman’s broad overview in the introduction. While Bulman describes the questions that exercised the minds and the pens of the Enlightenment, Van Kley details the types of responses with which they answered. These ranged from the Protestant Arminian demand that the state ought to moderate the “manners” of a religiously diverse society, to the pro-commercial insistence that the “sympathy” inherent in human nature could be improved through mercantile transaction. But the reader is left uncertain exactly how Van Kley’s intricate diagram of the variety of Enlightenment experiences maps onto Bulman’s outline. The conclusion does not explore the influences that the encounter with non-Christians might have had on those experiences. Nor does it describe effects that the new media of the Republic of Letters and the popular presses might have had on the articulation of the answers to the questions that elite secularity posed, aside from his perceptive analysis of the new genres of historical scholarship. Van Kley’s conclusion traverses an impressively extensive historiographical terrain without these inclusions, but their absence in his account and their prominence in Bulman’s complicates a relationship between the chapters that could have been made more explicit.

Though God in the Enlightenment imposes neither a monolithic narrative of how the historical moment unfolded nor a singular argument for the place religion ought to occupy in public life, it brilliantly illustrates how approaches to secularity beyond liberal secularism, offered by Charles Taylor, Jeffrey Stout, and Saba Mahmood, can reveal richer descriptions of Enlightenment. William Bulman’s introductory synthesis and the contributing essays deserve serious attention from any reader who hopes to muster history in the service of understanding religion and secularity today.

Simon Brown is a doctoral student in the department of history at the University of California, Berkeley. He is primarily interested in the history of theology and its relationship to pedagogical practices and scholarly institutions between the Reformation and the Enlightenment, with a particular focus on England in the seventeenth century.