Race and Secularism in America 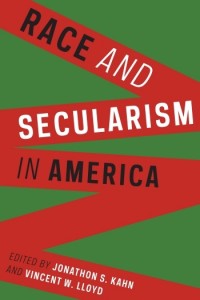 On September 13, 2016, Clemson University’s head football coach Dabo Swinney was asked what he would do if one of his players refused to stand for the national anthem. San Francisco 49ers quarterback Colin Kaepernick had recently done so, explaining that he would not “stand up to show pride in a flag for a country that oppresses black people and people of color.” Swinney took issue not with Kaepernick’s message, but with his method. Dismissing Kaepernick’s refusal to stand as “distracting,” Swinney deployed the image of Martin Luther King Jr. as a model of “the right way” to protest. Praising King as one of the greatest leaders ever, Swinney emphasized his Christian values and peaceful resistance: “[King] changed the world through Jesus. Boy, that’s politically incorrect. That’s what he did . . . It’s so easy to say we have a race problem, but we got a sin problem.” Summarizing King’s solutions to social ills as “Love, peace, education, tolerance of others, Jesus,” Swinney appeared genuinely pleased with American progress when he reflected on the world King helped create, one which King could only have dreamt of—a world of black quarterbacks, CEOs, and presidents.

Swinney’s words immediately sparked controversy. Clemson professor Chenjerai Kumanyika responded with an open letter to Swinney, sharply titled “Take MLK’s name out your mouth.” He chastised Swinney for participating in a long, misguided heritage of sanitizing King’s radicalism, and of corrupting King’s legacy for the purposes of white moderate liberalism. “In the face of the injustices in his own time,” Kumanyika writes, “Dr. King called for direct action, not press conferences.” To see King as the “palatable Christian alternative to unruly black protest” distorts not only King’s own politics but betrays a fundamental misunderstanding of the difficult and dangerous work of fighting white supremacy.

The editors of Race and Secularism in America, Vincent Lloyd and Jonathon Kahn, would not be surprised by this marshalling of Martin Luther King Jr. and his legacy, nor by the fact that this legacy is constantly contested and renegotiated along lines of protest, race, and religion. Indeed, in the collection’s introduction, the King monument in Washington, DC serves as a towering symbol of the complex relationship of its two subjects—race and secularism—and their analytical inextricability. King is central to the collection’s claim: Because “whiteness is secular, and the secular is white,” “the careful management of race and religion are the prerequisite for accepting the public significance of a fundamentally raced religious figure.” Indeed, the collection takes as its central stance that secularism itself is primarily a (white, liberal) game of managing and excluding difference.

One cannot, therefore, think about secularism outside of a racial context, or of race outside of issues of religion and secularism, as too many scholars have done (For more on this topic, read the forum Religion, secularism, and Black Lives Matter, curated by Vincent Lloyd). If King is one major specter haunting this collection, Charles Taylor is another. Vincent Lloyd, in his introduction, and Jonathon Kahn, in his conclusion, grant that recent scholarship—sparked largely by Taylor’s tome A Secular Age—has done much to correct a clunky and inaccurate secularization thesis, in which the societal centrality of religion inevitably fades as modernity marches forward. Its blindness, however, to issues of race leave it incomplete and unsatisfying. Likewise, disciplines such as American Studies that have been particularly forward-thinking about racial issues have too often “overlooked religious identities.” Race and Secularism in America, then, aims to provide a starting point for this obvious and significant lacuna.

The collection’s essays are organized in three clusters. The first, entitled “Orientations,” focuses on theory and history in order to contextualize “the secularist racializing knot” in conversation with narratives of American liberalism. George Shulman takes up Carl Schmitt’s notion of “political theology,” arguing that black insurgency—the means of black resistance to white supremacy—effectively shows the limits of Schmitt’s treatment of liberal modernity. Josef Sorett’s essay attempts to outline a history of the trope of black sacred/secular fluidity. Because African Americans have been understood as “the hyperreligious foil to a secularizing zeitgeist,” black people and culture have been historically tied to religiosity itself, and the black church has emerged as both a site and symbol of black spiritualism and difference. In order to move past a reductive understanding of the monolithic “black church” and the apparently all-consuming role of religiosity in black life, Sorett attempts to historicize the role of the church and the attendant fluidity of sacred/and secular, arguing that scholars of black religion have all too often reproduced a logic of protestant liberal hegemony.

The second section, “Readings,” consists of three case studies; each involves a close reading of text, event, or group in order to tease out specific themes in the secularist racializing knot. Edward Blum analyzes the story of Henry “Box” Brown, the slave who in 1849 mailed himself to abolitionist friends in the North, securing his freedom. For Blum, Brown’s story, as well as the transcendent religious significance infused in its retellings, challenges the thesis of Charles Taylor and others that the nineteenth century was essentially secular. Ignoring slaves as people and actors, these scholars normalized white, European secularism and in the process recreated problematic positions of white hegemony at the expense of historical accuracy and inclusion. Erica R. Edwards also treats selective historical memory, taking up television representations of Martin Luther King Jr. in order to explicate not only the popular legacy of the civil rights movement, but to explore salient issues including gender and King’s “postmortem charisma.” The final essay in this section, by Joel Blecher and Joshua Dubler, looks to the Salafi Muslims of Philadelphia. They argue that the Salafi refusal to participate in the fight against racial and economic injustice is not the result of social ignorance, but rather is a “willful silencing,” as Salafis offer a “conception of Islam in which personal piety is best practiced when it is insulated from the macropolitical order.” As such, this tradition challenges conventional notions of black political engagement as well as the role of religion in African American life.

“Inflections,” the volume’s third section, widens in analytical scope, incorporating transnational and postcolonial approaches. M. Cooper Harriss explores Ralph Ellison’s Invisible Man as a “secular novel that offers . . . an invisible theology of race.” Harriss first engages in a biblical analysis of the concept of invisibility itself, arguing that consciously or not, these “religious antecedents” contributed significantly to Ellison’s deployment of invisibility. He then moves to the current implications of an invisible theology of race, citing specifically drone wars and “presumptions by the United States to police regions populated by Muslims according to ostensibly secular principles.” William D. Hart is likewise interested in the transnational implications of racialized religious tropes: He analyzes the concepts of frenzy, voodoo, and fetish, each from a different colonial context, to explicate the continued othering of black religion and culture. “Where racial tropes are concerned,” he writes, “religious and secular practices are two sides of the same colonial reality.” Finally, Willie James Jennings also takes up colonial reality and Christianity, but in a very different context. He is interested in the spatial enactment of secularism in the early colonial period in America, and seeks to understand “secularism as a set of spatial and bodily practices formed inside a Christian theological architecture.”

The collection ends with editor Jonathon Kahn’s survey of the literature surrounding secularism, as well as an examination of James Baldwin’s treatment of black religiosity in his classic novel, The Fire Next Time. There is also an addendum article by Tracy Fessenden—an attempt to incorporate gender into the analysis by looking at a dominant secularist discourse that characterizes religion writ large as generally oppressive to woman. Building on the work of Saba Mahmood, Fessenden argues that “the ready assumption that secularization is liberating for women is both racist and spurious.”

Throughout this volume, the analytical stakes are high. In their ambition, however, the authors make a curious omission: although the book in theory takes on the interconnectedness of race and secularism in the United States, it is centrally interested in the African American experience vis-a-vis white hegemony. Lloyd makes a quick mention of race beyond the black/white binary in his introduction, while Kahn assures the reader that the collection is meant only as a starting point, therefore justifying its singular focus. It still seems strange that although the collection stakes its position in correcting a dangerous lacuna, proposing to cover such a capacious topic, it then takes an oft-criticized myopic scope. Relatedly, any substantive treatment of whiteness and religiosity is conspicuously absent. Not only is there no conversation of white religion and secularism—a topic that certainly does not stand apart from matters of race—but there appears a disturbing implication that whiteness is indeed the absence of race. The editors and contributors argue vehemently that secularism is not neutral, that it is importantly white, European, hegemonic; it seems to follow that by this logic, whiteness itself should not be treated as a non-race. This is why it really does matter that the essays focus exclusively on African Americans: In making the herculean attempt to rethink secularism in America as a fundamentally racial project, the authors nonetheless perpetuate a narrow image of race itself.

Still, the collection does important work. The authors press the point that this is not a conversation merely about discourse, but about bodies, practices, and lived experiences. They hope to transform the ways scholars treat secularism as a subject and to center crucial notions of justice, inclusion, and transcendent potentialities. The collection in large part fulfills its lofty goals: its premise is convincing and its talented interdisciplinary group of contributors shines. This volume indeed represents a crucial step in the untangling (or re-tangling) of ideas about race and the secular in American society.

Grace Goudiss is a graduate student in the History Department at UC Berkeley whose interests include race, religion, popular music, and politics in the twentieth century United States. She is currently working on a project about Jim Jones’s Peoples Temple, California Democrats, and the 1970s within larger black Atlantic and Cold War contexts.