Regulating symbols: The burkini and niqab bans in France 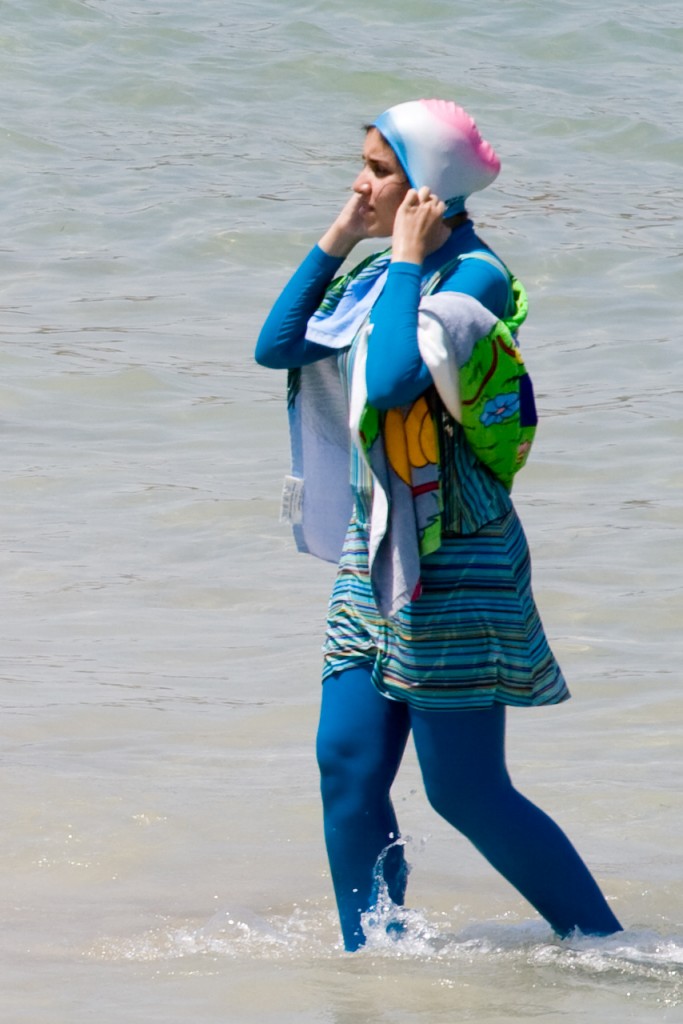 Last month, the image of three police officers standing over a woman on the beach in Nice, supervising the removal of her “burkini” (a wetsuit-like swimming costume favored by some Muslim women), provoked great outrage over the bans of the garments in five French seaside towns. The criticisms have been several. The bans are conceived as a trespass against freedom of expression, guaranteed in that foundational document of the French political imagination, the Declaration of the Rights of Man and Citizen (1789). Others have seen the bans as manifestations of patriarchy or symptoms of Islamophobia in the West. In the United States, the bans have been labeled assaults on the freedom of religion.

The debate over the burkini strongly evokes the 2010 debate over the niqab (the veil that conceals everything but the eyes) in French public spaces. That debate—itself related to France’s earlier debate about the hijab in public schools—issued in a national ban. The ban was implemented over and against the advice of the Conseil d’État, which advised the niqab could not be said to represent a sufficient threat to “public order” to justify it. When the burkini ban was challenged last week, the Conseil d’État overturned it, citing similar considerations. (The Conseil d’État has the power to nullify administrative actions but can only issue advisory opinions vis-à-vis legislation.) And yet the niqab ban persists: when it was challenged before the European Court of Human Rights in 2014, that Court allowed it to stand.

We can learn a great deal about the burkini bans by considering them in the context of the niqab debate—and, in particular, the proceedings of the National Assembly’s Gerin Commission, convened to hear testimony from a variety of experts (academics, members of advocacy groups, religious officials) on the question. Without claiming to provide an exhaustive account of what are no doubt a variety of motivations for the niqab and burkini bans, I want to highlight one whose implications I think have not been understood. It treats the garments not as pieces of clothing designed to conceal and reveal, but rather as signifiers, and it trades on a model of religion as a system of symbols in order to locate a register in which harm has been inflicted in the form of symbolic violence.

The mayor of Cannes, David Lisnard, in justifying his town’s ban, said burkinis are a “symbol of Islamic extremism.” Having called the burkini a “symbol of the enslavement of women,” Prime Minister Manuel Valls claimed that Marianne’s naked breast was a more appropriate symbol for the Republic. Italian bishop Nunzio Galantino, criticizing the French regulations, described them as a “war on symbols.” Galantino meant to depict the French measures as acts of aggression against Islam, but in France’s view, the battle of symbols was begun years ago—by Muslims. “The full veil is a symbol for the annihilation of the emancipatory principles of the Republic,” wrote the Gerin Commission.

As this would suggest, the framing of distinctive Islamic dress as “symbolic” similarly characterized the niqab controversy. At the beginning of its report, the Gerin Commission raises the question: “Is the matter simply a question of the liberty to dress oneself as she pleases? Beneath the clothing question, don’t we see in this piece of fabric something totally different, a symbol?” In reviewing the situation of the full veil in the various other European countries, the Commission considered as a potential analogue anticonstitutional symbols (i.e. those associated with Nazism) in Germany.

Though there is consensus on the symbolic nature of the niqab, the matter of what, precisely, this symbol stands for is less clear. Writes the Commission, “The full veil is truly a symbol of enslavement, the walking expression of a denial of liberty . . .” The philosopher Henri Pena-Ruiz—one of the experts testifying before the Commission—spoke of a “symbol of alienation.” Samir Amghar, a scholar of Salafism, testified, “Those who wear [the full veil] . . . consider it a symbol of respectability.” At the same time, he also considered it “symbolic rebellion . . . against the social order.”

The consensus on the symbolic nature of the niqab gestures to a certain understanding of religion. For anthropologist Clifford Geertz, religion was a “system of symbols” that “act to establish powerful, pervasive and long-lasting moods and motivations in men by formulating conceptions of a general order of existence . . .” Geertz’s model highlights a to-and-fro dynamic at the heart of religion: symbols express a certain conception of the world; these symbols, playing a role in religious practice, tend to reinforce that same worldview for adherents.

Geertz’s definition of religion in terms of meaning-bearing symbols is, for anthropologist Talal Asad, a product of a model of religion focused on belief, historically associated with the rise of the nation-state. Asad reminds us that belief-based models of religion are not universal. He urges that some things we call “religion” do not pertain to asserting propositions through symbolic communication. Some forms of religion would be, rather, a “network of motivated practices”—that is to say, forms of discipline that produce selves oriented in certain ways to the world and to God. Perhaps the veil does not signify, but rather helps its wearer cultivate certain virtues or dispositions.

Such forms of religiosity are occluded if our model of religion assumes “the primacy of meaning.” And indeed the Gerin Commission expends significant effort toward arguing that the niqab is not “religion” but rather “culture.” When the state does not regard the veil as “standing” for something, it cannot see veiling as a religious practice.

At the same time, though, another current pushes the state toward regarding the niqab as religious. (Legislators carved out an exemption, in the niqab ban, for places of worship.) And according to the model of religion underwriting the French government’s negotiations with the niqab and the burkini, if these modes of dressing are to be considered “religion,” they must be assigned meanings. Asad writes, “The demand that a practice must ‘affirm something,’ that it should be able to state a meaning, is the first condition for determining what is truly religion.”

But much as there is confusion over whether or not the niqab and the burkini are “religion,” there is confusion between two models of semiotics in discussion about them. When the garments are conceived as symbols of “respectability,” for instance, the symbols are regarded as generated by the community in question to reflect and reinforce a particular worldview (one emphasizing the virtues of modesty, say). On the other hand, when the burkini or niqab is considered as a symbol of “alienation” or “enslavement,” it is being correlated with a system of values that is very much not that of the community of practitioners.

On this analysis, symbols are conceived as bearers of propositional content, but they are communicating this content to outsiders. In the case at hand, the symbols are seen as flouting—and thus challenging—the worldview of the broader society. This semiotics clearly informs much analysis of the niqab and burkini: In his testimony before the Commission, the philosopher Abdennour Bidar considered that “the majority perceives [the niqab] as manifesting a certain symbolic violence.” It colors the language of the Cannes ordinance banning the burkini, where the garment is identified as “not respecting good morals and secularism.” It is almost comically manifest in an interview in Le Figaro with Nicolas Sarkozy, where he describes the burkini as a “provocation” and suggests that France would “appear weak” if it did not respond to it.

Once again we see the tenuous line the discourse walks regarding the religiosity of the niqab and the burkini: the assignation of symbolic meaning (“denigration of laicité”) to them here tends to push these practices out of the domain of religion, since for those doing the assigning, political protest is opposed to religious practice. But it is because the niqab and burkini are (sometimes) viewed as religious that a meaning must be imputed to them at all.

Critically, the construction of the niqab and the burkini as symbols bearing messages serves a distinct legal purpose: it translates niqab- and burkini-wearing into a register where damage to others can be more plausibly constructed. The guiding legal principle for the construction of liberty in France, since the 1789 Declaration, is that one’s liberty ought to only be constricted in cases of harm to others. If the niqab or the burkini is simply a garment of clothing, it is quite hard to see how it is harming others. But—as witnessed by the quotes above—if it is a symbol, a new realm of injury (“symbolic violence”) is opened.

I am hardly the first to suggest that French anxiety over manifestations of Islam evokes the historical legacy of colonialism; the symbolic interpretation of the clothing practices also partakes of a colonialist dynamic. Asad shows the way in which the symbolic model of religion has historically enabled missionary efforts: the unevangelized were often conceptualized as people with (literally) nonsensical practices—practices that did not “mean” anything. This move rendered irrational those to be evangelized, and thus in need of instruction, even as it opened up their practices to the imputation of meaning—which gave missionaries an opportunity to disseminate their ideas and values.

We could see, in the French discourse surrounding the niqab and the burkini, a similar gambit. It simultaneously raises questions about the meaningfulness of the veil (Why would you do this? It’s not in the Quran! Muslim jurists do not think it is obligatory!) and assigns meaning to it (It’s a symbol of oppression! Of inequality! Of rejection of the Republic!). But notably, when this evangelization dynamic is evinced by the “secular” state, the assignation of meaning becomes the first step in the exercise of the state’s sovereign power in the form of direct regulation.

It is often observed that “secularism,” even as it purports to be about distinguishing the religious realm from the political in order to secure the autonomy of both, actually ends in government regulation of religion. In order to preserve the autonomy of “religion,” the government has to identify what counts as religion, and this is never a disinterested decision. The burkini and niqab controversies extend this logic: Because a certain model of religion is assumed by the French state, anything “religious” has to bear symbolic meaning. And when it doesn’t, that meaning can be assigned by state actors. That is to say, in contemporary France, the conception of religion as a system of symbols, combined with a particular semiotics, is opening up the space—politically, if not legally—for a new technique of regulation.

Stephanie Frank is lecturer in religion and the humanities at Columbia College Chicago, where she has designed the institution’s first curriculum in religious studies. She received her Ph.D. from the University of Chicago in the History of Religions and has published on topics from the intellectual history of the French social sciences to political theology.