For God and Globe 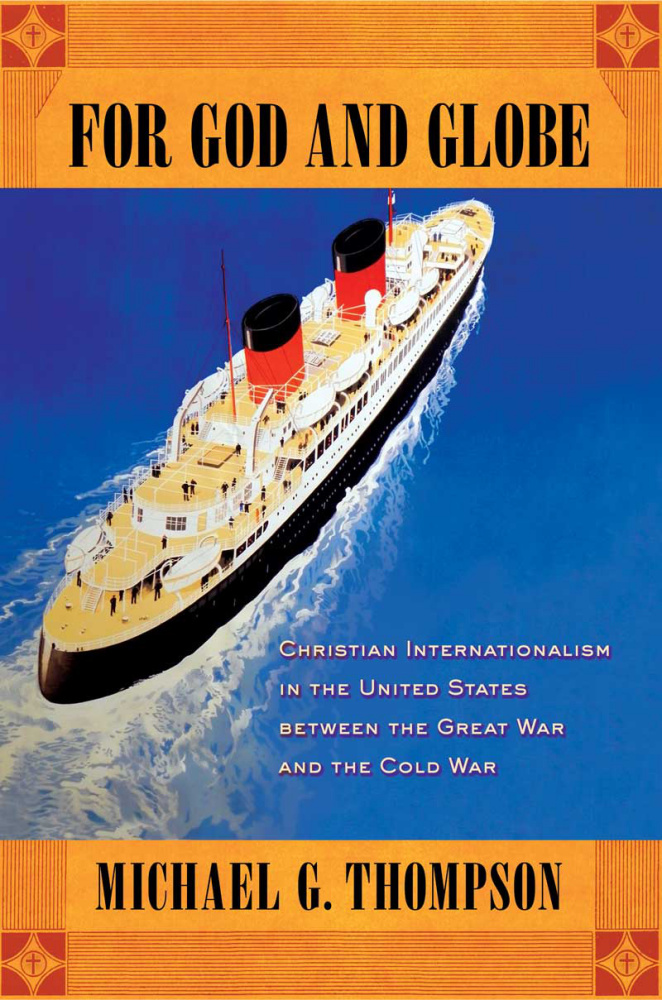 In 1937, some of the most prominent and influential Protestant leaders in the United States travelled to Oxford for a global gathering with their coreligionists to address the troubles plaguing the world. In profound moments of collective prayer at this multi-national gathering, Protestants asked themselves out loud: “Have I allowed my Volk heritage, through my own ignorance, pride and self-centeredness, to become ‘a middle wall of partition’ between me and those of other races and cultures?” Those gathered at Oxford’s St. Mary’s Cathedral paused and then asked together, “Have I been truly a brother to my fellow-men irrespective of caste, color, creed and nationality?”

The 1937 Oxford Conference, and the broader movement of Protestant internationalism in the interwar decades it represented, is the subject of Michael G. Thompson’s impressively researched and deeply informative new book, For God and Globe: Christian Internationalism in the United States Between the Great War and the Cold War. Like the conference itself, Thomson’s historical actors—increasingly called “ecumenical Protestants” by scholars to distinguish them from evangelicals—exhibited contradictions. Protestant internationalists at Oxford claimed to stand in solidarity with all peoples and all nations but they exhibited “a decidedly North Atlantic focus.” Protestant internationalists claimed to be opposed to the nation-state but they brought uniquely American ideas and practices to international gatherings. They called Oxford a “Christian” gathering but the Protestant organizers were not on speaking terms with Catholics. They attacked racism and segregation at Oxford while continuing to practice it at home in their churches, denominational bodies, and interdenominational organizations. They were one of many “international social movements” of the interwar era, yet their ideas should be understood as a form of “Atlantic crossings.” These are but some of the paradoxes about Protestant internationalism that For God and Globe illuminates with great detail and rigor.

Thompson’s narrative is refreshing because it stands out from the body of literature about Christian internationalism, much of it written by participants in the ecumenical movement. Take, for example, the masterful narration of the realist-pacifist battles in For God and Globe. The story of the battles in these religious communities about America’s relationship to the wars in Europe and Asia in the 1930s has largely been narrated by the victors: Reinhold Niebuhr and a band of self-proclaimed realists, who argued that pacifists were too naïve to understand an increasingly complicated and dangerous world. And it is remarkable how historians of Protestant communities have long taken realism as a telos, affirming the story the realists told about themselves.1

Thompson sees things differently. The Christian realism of Reinhold Niebur was “a qualification within Christian internationalism,” he argues. Thompson shows that the common ground Protestant internationalists shared was far more significant than the theological divisions between pacifists and realists.

The most important common ground that Protestant internationalists shared was the journal The World Tomorrow, whose short career from 1926 until the mid-1930s is the focus of the first portion of the book. The journal became the bastion of a “foreign policy counterpublic” or an “oppositional community of discourse,” whose narrow membership included elites knowledgeable enough to influence foreign policy but whose view of the world contrasted with the prevailing ideology of the foreign policy establishment. Published at a time when few professional foreign policy journals existed in the United States, The World Tomorrow brought together theologians with historians and international relations scholars, providing them space for the articulation of a distinctly anti-nationalist outlook.

Thompson’s book is the most detailed and nuanced exploration of Christian anti-nationalism in the 1920s, giving yet more evidence to what historians David Hollinger and Andrew Preston have argued about the long-term significance of ecumenical Protestantism in the United States in the twentieth century. Thompson shows clearly that ecumenical Protestants—as early as the 1920s—had strong commitments to antiracism and anti-imperialism.

The second portion of the book is dedicated to the attempt to institutionalize Protestant internationalism, as they gathered at a series of international conferences. The 1925 Stockholm Conference was one such attempt, as important for convincing the Greek Orthodox Church to send representatives as it was for the inability to forge Protestant unity. The conference was focused on practical cooperation under the banner “Doctrine Divides but Service Unites” and left theological disputes for other occasions. But this slogan was too optimistic. The American delegates shared with their British and French counterparts a faith in the mandate of the League of Nations, and a desire to sacralize the Wilsonian organization. Speakers proposed that international Protestantism provide a “soul” for the League and one member went so far as to call on Christians to “invoke the benedictions of the Heavenly Father upon the holy enterprise” in a yearly ceremony. Unsurprisingly, the German delegates dissented, referencing the “war guilt” clause of the Treaty of Paris as evidence of the unchristian character of the League.

Delegates from the continent were likewise critical of the Americans’ enthusiasm for breaking down borders between nations. A German delegate warned against “making a uniformly drab and inert mass of millions of standardized men out of peoples and churches distinguished from one another by speech, by civilization and by historical experience.” The German delegates found the Americans naïve, like children acting as if “the Kingdom was just around the corner if Prohibition and the Outlawry of War could be made to stick.”

By the 1937 Oxford conference, conditions had changed. The German delegation skipped the affair and American realist theology aligned with continental neo-orthodoxy to give delegates a new language to express their discontent with nationalism. The post-liberal Protestant position on nationalism came to be “articulated in a constant and complex negotiation of ‘Yes-and-No.’” As Thompson puts it, “There could be no seamless identification of the Kingdom of God with the nation-state or with the League of Nations: either with nationalism nor internationalism.”

The ideology developed at Oxford made its “Atlantic crossing” to the United States in through the Dulles commission, named after its chairman and future Secretary of State John Foster Dulles. Relying on the language of Oxford, Dulles used his political connections and the clout of the Protestant establishment to famously shape the United Nations and the later Universal Declaration on Human Rights. But in the process, Thompson shows how Dulles transformed the meaning of anti-nationalism at the Oxford conference. While Dulles’ lobbying at the United Nations Conference in San Francisco should be seen as “fulfilling the more long-range proposals arising from Oxford in 1937,” it also marked the Americanization of earlier developments, wedding Protestant internationalism to the world-historical mission of the United States. “The mutual courting of church and state and the ideological linking of God and nation were exactly what commission leader Dulles was working for,” Thompson argues.

Thompson ends his book by calling the interwar era of Christian internationalism a “lost civilization.” This civilization stood in contrast to a peculiarly American internationalism ushered in by Dulles. The transition is somewhat overstated, since there was plenty of affirmation American imperialism in the 1920s and 1930s. Anna Su’s excellent book Exporting Freedom shows that ecumenical Protestants closely cooperated with government efforts to project American power abroad well before the Cold War. Additionally, an ecumenical Protestant obsession with the United Nations and the Universal Declaration on Human Rights during the Cold War demonstrated that many were yearning for a reference point beyond the nation state—one that provided a broader moral and political foundation than a single religious tradition.2

What is presented in For God and Globe as a declension narrative about a “lost civilization” could be reasonably recast as a complicated search by ecumenical Protestants for universal values beyond mere Christianity. Exploring the relationship between Protestant internationalism and the broader religious context of the interwar years would have strengthened Thompson’s arguments about anti-imperialism. For God and Globe mentions the parochialism of American Protestant internationalists, but does not fully explore their attitudes towards Catholics, Jews, Buddhists, Hindus, and the non-religious. Some recent scholarship has accused Protestant internationalists of harboring deeply anti-secular feelings, which accelerated in the late 1930s and came to fruition in the religious nationalism in the 1950s. Samuel Moyn, Mark Edwards (who Thompson cites generously), and Justin Reynolds3 have all pointed to the anti-secular inclinations of mid-century ecumenical Protestants. Edwards goes so far as charging ecumenical Protestants with developing a “counter-totalitarianism” far more restrictive than anything evangelicals had ever come up with.

Moreover, Protestant views of Buddhists and Hindus were intimately connected to the fate of imperialism. Creating theological room for other world religions was part of the Protestant response to growing nationalism in India, China, and elsewhere in the early 20th century. The European neo-orthodox theologians rejected the growing liberal Protestant acceptance of Buddhism and Hinduism as a potential path to salvation, a controversy that threatened to tear apart the International Missionary Council meeting near Madras, India in 1938. Not without reason, some American Protestants read the neoorthodox move as tacit support for imperialism. A few years later, during World War II, liberal Protestants in the United States distanced themselves from their British colleagues because the latter hesitated to criticize colonialism and did not embrace the United Nations.

In light of these developments, it seems clear that the Americanization of Protestant internationalism during and after World War II was a much more complex affair than Thompson’s conclusion suggests. The break between ecumenical Protestants and their European colleagues also marked the greater acceptance of Jews and Catholics, Buddhists and Hindus, decolonization, and more vociferous criticism of Jim Crow.

This is yet another paradox. The growing inwardness of American ecumenical Protestants in the 1940s intersected with a major leap forward in what David Hollinger calls “the historical function of self-interrogating ecumenical Protestantism as an environment in which many Americans found themselves able to engage sympathetically a panorama of ethnoracial, sexual, religious, and cultural varieties of humankind.” Ecumenical Protestants reembraced the nation-state in the 1940s, but they did so with the assumption that it would be more just and inclusive, and the country’s actions would be chastened by the United Nations and Universal Declaration on Human Rights.

Scholars will continue to debate the long-term significance of ecumenical Protestantism. Thanks to For God and Globe they will do so with a much greater understanding of this uniquely antiracist and anti-imperialist milieu.

Gene Zubovich is a Visiting Lecturer at the University of California, Berkeley. Beginning Fall 2016, he will be a Postdoctoral Research Associate at the John C. Danforth Center on Religion and Politics at Washington University in St. Louis. He is currently completing his manuscript, The Global Gospel: Protestant Internationalism and American Liberalism in the Twentieth Century.