The sacred and the social 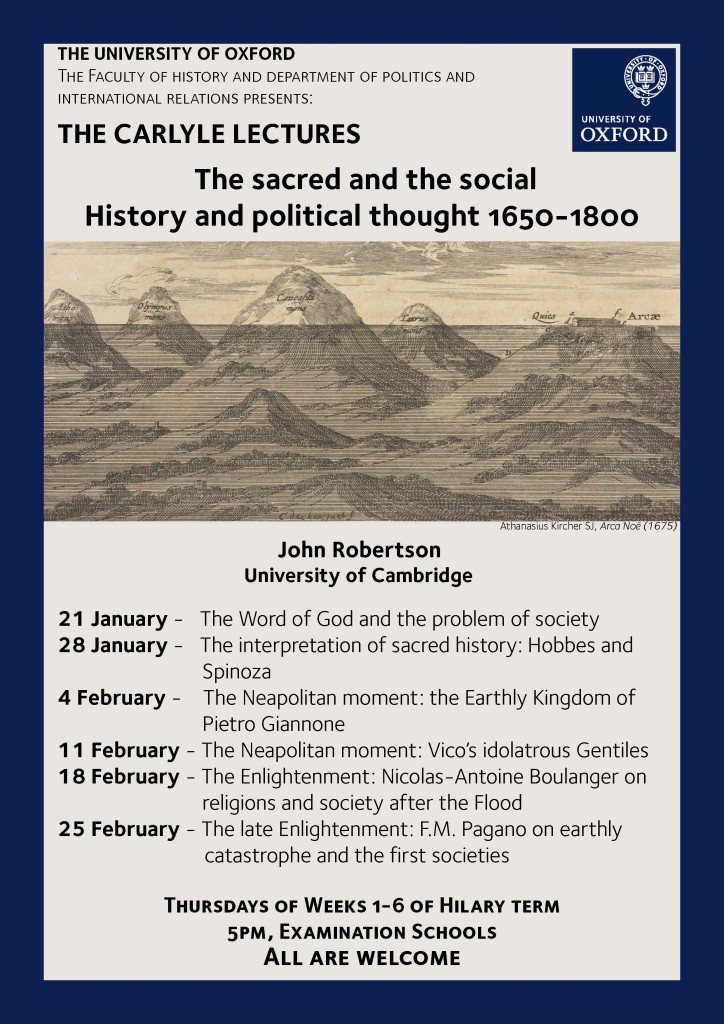 In these Carlyle Lectures, given at the University of Oxford in January and February 2016, I suggested that between 1650 and 1800 sacred history offered a fertile resource to political philosophers interested in exploring the concepts of “society” and “sociability.” The lectures thus brought together two stories which early modern intellectual historians have tended to keep separate. One is the study of sacred history, in particular of its foundation text, the Bible, which entered a new phase in the Renaissance, and reached a peak of intensity and originality in the seventeenth century. Over this period a succession of scholars from Erasmus to Richard Simon transformed understanding of both the text and the context of the Bible by study of its composition and authorship, and of its chronologies and historical and geographical content. The excitement of that early modern scholarship has recently been captured by Anthony Grafton and a growing number of younger historians, including Scott Mandelbrote and Dmitri Levitin.1 In turn, their work has enabled me to appreciate what the political philosophers who are my subjects saw in sacred history.

Historians of political thought, meanwhile, have recently been much occupied with the problem of “sociability”: whether sociability should be regarded as natural to man (to men and women), and whether “society,” societas, should be conceptualized as independent of, or at least prior to, the civitas, the commonwealth or state. For this discussion my principal reference points were recent works by two Cambridge colleagues, Annabel Brett and the late Istvan Hont. Approaching from different ends, Brett forwards from the sixteenth and early seventeenth centuries, Hont backwards from the late seventeenth and eighteenth centuries, both converge upon the critical contribution of Hobbes, who questioned whether natural sociability could be relied upon, and maintained that society cannot exist without sovereign power.2 Still more of an inspiration, however, was John Pocock, who pointed out forty-six years ago in his wonderful essay, “Time, history, and eschatology in the thought of Thomas Hobbes,” that Hobbes’s political thought also engaged with sacred history.3 With Hobbes as a starting point, therefore, my lectures pursued the theme of the sacred and the social through a succession of thinkers up to the end of the eighteenth century.

There were two phases to the enquiry. The participants in the first phase were Hobbes, in the final chapters of De cive (1642, 1647) and Parts III and IV of Leviathan (1651), Baruch Spinoza, in the Tractatus theologico-politicus (1670), and the Neapolitan historian, Pietro Giannone, whose unpublished “Triregno,” a study of the “three kingdoms” of the Christian religion, the “earthly,” the “heavenly” and the “papal,” was composed in exile (in Vienna) between 1731 and 1733.

In this first phase, Hobbes stands as a negative pole to both sides of my argument. Not only did he repudiate Aristotle’s supposition that man is by nature fit for society; in his interpretation of the sacred history of the Old and the New Testaments he insisted that the civil sovereign alone had possessed the authority to determine the religion of both the ancient Hebrews and the followers of Christ. Neither in the historical perspective of the Christian Commonwealth nor in the Commonwealth derived from the natural condition of man, therefore, was there room for the analysis of society apart from the state.

By contrast, Spinoza and Giannone gave themselves space to separate the two. Even if it is fear which motivates men to contract to obey a sovereign, Spinoza argued, a society will not cohere and survive on the basis of fear alone. Interpreting the Bible as the “narrative” by which the Hebrews had constituted themselves as a nation, Spinoza portrayed their cultivation of “piety and religion” through Mosaic law and custom, rather than their changing forms of government, as the key to understanding their solidarity and survival. Taking the scholarship of Richard Simon to have reinforced the status of the Old Testament as the oldest record of human history, Giannone cast the “earthly kingdom” of the ancient Hebrews as an account of the beginnings of “civil society,” in which the institutions of family, language and religion were as important as the form of the Hebrew republic.

The second phase of the engagement was inaugurated by Giambattista Vico, Neapolitan contemporary of Giannone, in his Scienza nuova, or New Science of the nature of Nations (1725, 1730, 1744). It was then carried forward by the French naturalist and mythographer Nicolas-Antoine Boulanger, in his L’Antiquité dévoilée par ses usages (1766), and by Francesco Mario Pagano, a leading philosopher of the late Neapolitan Enlightenment, in his Saggi politici (1783-5, 1791-2).

By comparison with the use made of sacred history by Spinoza and Giannone to address the question of the social, Vico’s New Science clearly marked a turning point. While Vico explicitly confronted the Hobbesian problem of sociability by way of his engagement with the Protestant jurists Grotius and Pufendorf, he did so by focusing not on the Hebrews, but on the gentiles, separated from the Hebrews after the Flood. Yet Vico was insistent that that he drew his principles from “within sacred history.” He continued to acknowledge the divine status of the Bible, adopting the chronological-historical framework of the Vulgate, and depicting the aftermath of the Flood as the equivalent of the Hobbesian state of nature. Within this framework, he interpreted the myths of Homer and other ancient pagan poets as historical sources compatible with sacred history, and as the key to the gradual socialization of man through the institutions of religion, the family and burial. At the same time, Vico insisted that human history was subject to divine providence, guaranteeing that the civil history of all nations had a sacred dimension.

The extraordinary intellectual effort which Vico put into upholding sacred history as the dimension of human socialization could not be sustained. Natural historians were by now producing accounts of the formation of the world incompatible with that in Genesis, while the credibility of the Biblical chronologies was at last dissolving. Nevertheless, the Flood was to retain its fascination as the starting point for human history. It stood at the convergence between natural historians’ interest in the disasters which had shaped the early history of the earth and the realization that flood myths were a common feature of all the major religions. For Boulanger, who had not read Vico but was accused of plagiarizing him, the aftermath of the Flood and the religious myths it generated were the key to understanding the formation of societies. Pagano, who had read both Vico and Boulanger, discounted the Biblical Flood in favor of a purely natural history of disasters, but likewise found in man’s religious response to these a key to the earliest forms of social organization. For thinkers such as Boulanger and Pagano, the sacred was still indispensable to the social, even if the sacred history of the Bible could no longer be treated as the primary, privileged source for study of their interconnection.

A revised, shorter version of these lectures will be given as the Benedict Lectures in the History of Political Philosophy at Boston University at 5pm on 19, 21, and 25 April 2016.

John Robertson has been Professor of the History of Political Thought at the University of Cambridge since 2010, and a Fellow of Clare College. His most recent books include The Case for the Enlightenment. Scotland and Naples 1680-1760 (Cambridge: Cambridge U.P., 2005), and The Enlightenment. A Very Short Introduction (Oxford: Oxford U.P., 2015).