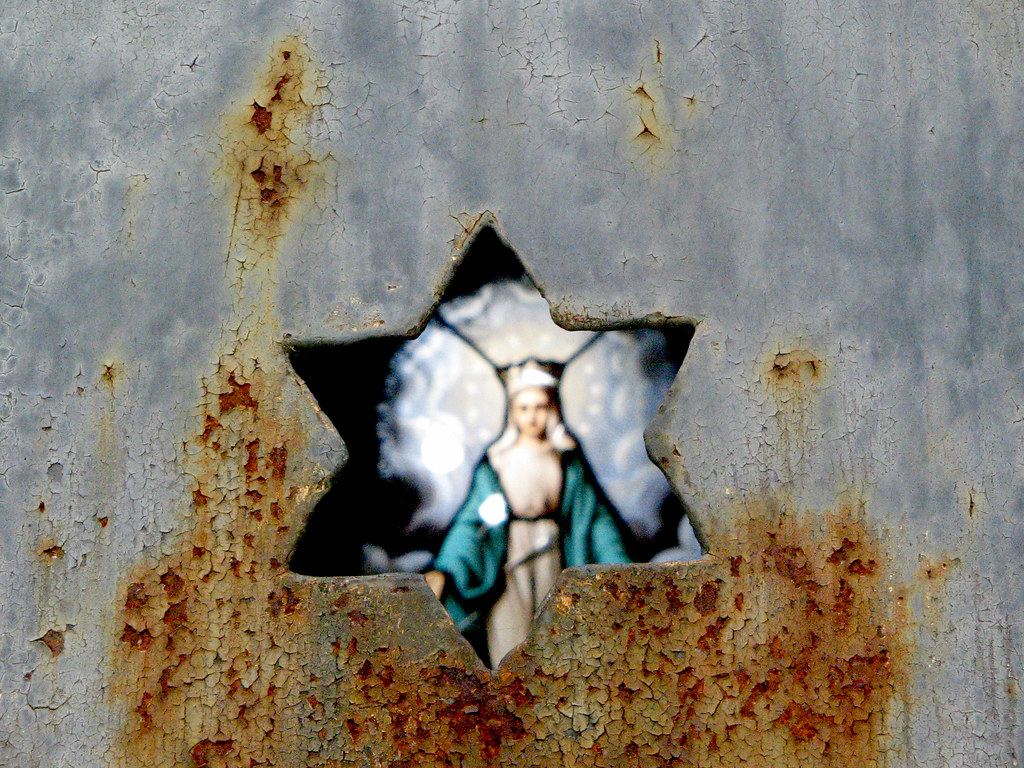 What did Christian human rights mean for Jews? This is not a question that Samuel Moyn considers in any great detail in his essays. In his framing piece, he advises us to read Pope Pius XII’s 1942 Christmas address for what the pontiff said, not for what he did not. Christian human rights were not conceived with Jews in mind, nor did many Christians in wartime Europe believe they applied to the plight of European Jews, apart, perhaps, from converts. Moyn convincingly argues that Christian human rights were the creation of conservative Christians (mainly Catholic in his telling, but with important participation by Protestants) who adapted their beliefs in the dignity of the human person and the core right to religious freedom to a transformed political landscape. In the process, they found that liberal democracy could be an ally, not an enemy, in their fight against secularism, materialism, and, above all, communism. Christian human rights, he concludes, had far less to do with the “inclusion of the other” than it did with “policing the border and boundaries at which threatening enemies” loomed.

But even if we allow that Christian human rights were not devised in response to the Holocaust, the problem of whether or not they offered anything to Jews (or any non-Christians) lurks on the margins of these essays. For one thing, Moyn describes the communist as “one of the avatars” of the contemporary Muslim in his provocative essay on the legacy of Christian human rights today in European Court of Human Rights cases about the Muslim headscarf. This begs the question of where Christianity’s other “other” fits into the story. For another thing, some of the key figures in Moyn’s story—most notably Jacques Maritain himself—published important reflections on Christian-Jewish relations during these years as part of the larger intellectual project that gave birth to Christian human rights. But most important, the same transwar period that produced this fundamental shift in Christian politics also saw a parallel transformation of even greater importance in (Catholic) Christian thought. During these years, Jews shifted “from enemy to brother,” in the words of historian John Connelly, who has tracked this shift from its earliest appearances on the margins of the Catholic world in the 1930s to its triumphant apotheosis in the 1965 Nostra Aetate. What do these two stories have to do with each other?

Secularism, materialism, and communism—the enemies that Christian human rights were meant to contain during the Cold War—were long considered particularly Jewish evils by secular and religious conservatives alike. Jews, it was widely believed, benefited most from the erosion of Christian Europe’s moral and social order, and so were accused of being the chief agents of its decline. The triumph of Bolshevism in Russia and the fear of its spread westward only heightened these fears, especially right after World War I and then again in the mid-1930s, at the time of the Spanish Civil War. József Cardinal Mindszenty, whom Moyn discusses as an icon of the privileged right to religious freedom in the Cold War West, is a good example. In late 1930s Hungary, he was still a parish priest and worried that Catholic opposition to native fascism would make the Church seem a friend to Jews and liberals. In this, he was not alone.

Then came a remarkable reversal: after 1945, Judaism became an ally, rather than an enemy, in the Christian battle to defend human dignity against materialism and the tyranny of the secular totalitarian state. One source for the shift was Christian anti-totalitarianism, which held that Nazism and communism were parallel threats to the dignity of the human person because they sprang from the same secular and materialist world-view. Important proponents of this idea argued that Nazi racism denied the spiritual treasure that ancient Judaism had given to Christians. Some went so far as to suggest that the “mystery of Israel” (Jacques Maritain’s phrase) gave Jews a crucial role to play in the war of the spirit against the secular. Another source was the example of Anglo-American Protestantism, which had endorsed the idea of a “Judeo-Christian tradition” already in the late 1930s. But most important were the dedicated Christian (Catholic and Protestant) activists, few in number but ultimately influential, who bravely debated the Christian roots of antisemitism in post-1945 Europe, often in dialogue with Jews, and who imagined Europe as a “Judeo-Christian” as well as a Christian civilization. For years, their labors were met with mistrust and suspicion from their superiors. But, in the end, they won. The profound shifts in teaching declared at the Second Vatican Council were their supreme achievement on the Catholic side. Their legacy made it possible for Pope John Paul II to declare in 1986 on the occasion of his historic address to the synagogue in Rome: “Ways [have] opened for collaboration in the light of our common heritage drawn from the Law and the Prophets… We wish to recall first of all a collaboration in favor of man… his dignity, his freedom, his rights.”

Without question, this astonishing transformation was the result of real moral courage. But Samuel Moyn’s methodological treatment of Christianity has implications for this story as well. He emphasizes the political possibilities that his protagonists find in Christianity. Certainly, he attends to the subtleties of philosophical or theological argument when he finds them. But he is most interested in tracking ideas about the person, rights, and order across formal, institutional, and even confessional lines in order to see how European Christians used them to imagine a political and moral vision for society. Europe’s original embrace of human rights, he concludes, was a product of the last “Golden Age of Christianity” on the continent, when conservatism was reformulated to fit the realities of the emerging Cold War world. It seems reasonable to put the contemporaneous breakthrough of “Judeo-Christianity” in Europe in this same context and to ask what might have been at stake when Cardinal Augustin Bea called in his 1966 commentary on Nostra Aetate on all those who had “access to the treasure-house of the Old Testament” to work together in view of the spread of “the systematic opposition to all religion.”

Were Christian human rights an inclusive idea? Modern antisemitism had thrived in Europe as a “cultural code”—the belief that a “Jewish spirit” or a “Jewish mentality” lay behind the very broadly defined secular and materialist forces at work in modern society. It was exclusionary, racist, and often deadly. The new Christian philosemitism responded to the challenge of totalitarian racism by treating Jews and Judaism positively. The dramatic re-imagination of the relationship between Jews and Christians overturned ancient slanders about Jews as Christ killers and Judaism as a sterile and legalistic faith. These ideas had justified Jewish exclusion for centuries. Formally rejecting them was an act of fundamental importance. But it did so by treating the problem of difference in much narrower and exclusively religious terms. To its champions, it was self-evident that re-imagining Christian-Jewish relations was an “inter-faith” problem that required dialogue between two religions: Christianity and Judaism; Church and Synagogue. Jews, it could now be said, had shared a great treasure with Christian Europe. The spiritual vigor of the Jewish faith was now one source of the rights and dignity of the human person and an important reminder of God’s love of Christians and Jews alike.

On the other hand, the “secular Jew” remained a suspicious figure. In the early postwar years, some of those most committed to removing the taint of antisemitism from Christianity could still lapse into solecisms about Jewish irreligion or spiritually dead Jews. As late as 1980, Germany’s Catholic bishops could issue a statement about the relationship of the Church to Jews that both expanded at length on the spiritual ties that bound Christians to Jews but also explained Auschwitz as the “product of a decided falling away from the Jewish faith as well as the Christian faith.” Statements like these suggest that transwar-era Christian human rights offered inclusion to Jews on strictly defined religious terms. They came at the price of narrowing down what it might mean to be “truly” Jewish. If it is possible today to imagine a more generous definition of European identity, it may be because—as with the idea of Christian human rights itself—later cultural and social developments forced a reinvention of “Jewish-Christian relations.”

What happens to the idea of Judeo-Christian Europe after the collapse of Christendom? When Geert Wilders talks about defending “Judeo-Christian civilization” he means by it little more than “not Muslim.” At one level, this suggests that Moyn is right to see the communist as the avatar of the Muslim. At another, it draws attention to the continent’s changed religious landscape. Stripped of the religious culture that made them resonate intellectually to a generation of Christians, words like Christendom or Christian Europe or Judeo-Christian values become mere slogans, empty of all content save the ideological. The decline of Christianity as a social and political force in 1960s Europe falls like a curtain on Moyn’s story. Christian human rights lost the context that gave them meaning. Christian personalism became peripheral to what came next. What exactly did happen to European Christianity in the 1960s, and what survived the transformation? This is, as Moyn says, another story. But for historians of religion in modern Europe, Moyn’s work on Christian human rights and his provocative hypotheses about their legacy today suggests that this might be the most important puzzle to solve.

Paul Hanebrink is Associate Professor of History and Jewish Studies at Rutgers University – New Brunswick. Author of In Defense of Christian Hungary: Religion, Nationalism, and Antisemitism, 1890-1944 (Cornell University Press, 2006), his research has focused on national identity and religion, collective memory, and the politics of antisemitism. Currently, he is working on a transnational history of the idea of Judeo-Bolshevism in twentieth century Europe.