In June 2009, I was interviewing a Fijian Methodist minister on the island of Matuku when the subject of curses came up. I had asked him about mana and sau, terms associated with spiritual power, which are often paired in indigenous Fijian discourse. Mana is anthropologically famous as a term Robert Codrington credited to Melanesians; Marshall Sahlins theorized for Polynesians; and Claude Lévi-Strauss characterized as a “floating signifier,” a sign “susceptible of receiving any meaning at all.” Sau, in Fijian, is often associated with a punitive spiritual force linked to chiefs. If you disobey the chief and you get sick, that’s sau.

When I asked the minister at Matuku about mana and sau, he responded in part by explaining the latter term as follows: “Here’s an example. You say something, [then] it happens. It’s like this, if I should curse you. You will go out today, even if you haven’t heard what I said, you will meet with misfortune. You’ll go and get hurt, eh?…That’s one translation of sau.”

The minister spoke Fijian, although the term I am translating as “curse” was, in fact, the English loanword “curse” plus a Fijian causative suffix: cursetaki. I had heard Fijians use the English word before, as well as Fijian-language terms that could be translated as “curse,” including one based on the root sau. The Fijian translation of the Bible offers various words for curses, with many of the Fijian terms based on roots denoting anger, evil, and ruin. These characteristics—speaking malice performatively, holding bad intentions, expressing anger, manifesting evil—are thus recognizable in both English and Fijian varieties of curses. Within Fiji, they are recognizable in pre-Christian as well as Christian traditions. In 1858, the missionary Thomas Williams reported that a dying man might pronounce the name of his enemy “if not as the object of immediate vengeance, yet of gloomy and disastrous predictions, which never fail to reach the ears where they are least welcome.” If this is not a curse, strictly speaking, it nonetheless bears a strong family resemblance.

In the present day, the effects of curses in Fiji are said to be seen in such symptoms as sickness and death, poverty, and educational failing. Curses often afflict families and villages rather than individuals. Curses are often attributed to non-Christian ancestors, but they are sometimes attributed to God. In a memorable moment in Fiji’s tumultuous national politics, the Methodist Church warned a constitutional review commission in 1995 that if Fiji were not declared a Christian nation, it would mean that “this nation is under a Divine curse.”

As I conducted research on Fijian curses, I gradually came to think of them in ways that were detached from questions of evil. I began to consider them an inherent part of Methodist practice. I do not mean that people actually go around cursing each other, or that they discuss curses openly in church. They don’t. But there is a strong sense in indigenous Fiji that curses exist and must be dealt with, and from my own analytical perspective—here is the thorny, paradoxical part—attempts to get rid of curses only make them more normal, more present, more interwoven with the strong Christian fabric enfolding daily life. In fact, in one nationally known case, a curse seems to be growing in popularity, as various groups want to claim a place in its shadow as I describe below.

I came to think about curses in new ways partly by reading, of all authors, Søren Kierkegaard. I had been reading Kierkegaard for my own interests, not because I expected him to shed light on Fijian social processes. I was both horrified and amused, as many present-day readers probably are, by the story from Kierkegaard’s biography about his family’s curse. His father, as a young boy tending sheep in a pasture, had gotten angry and cursed God for making him suffer. Because he cursed God—in the sense of saying angry words toward God, just as Job’s wife told Job to “curse God, and die” for his woes (Job 2:9)—the senior Kierkegaard came to feel that God had cursed his family. His son, the philosopher-to-be, became convinced that he and his brothers would all die before they reached the age Jesus had died. When he turned 34, living longer than Jesus is said to have done, Kierkegaard was surprised, and wondered if a mistake had been made in recording his date of birth.

It was not the biographical anecdotes from Kierkegaard’s odd private life that gripped me however, as much as his theory of repetition. For Kierkegaard, repetition is “recollection forward,” the remaking of an event. Perhaps the best description of Kierkegaardian repetition comes not from Kierkegaard himself but from the theologian John Milbank (2009: 159), who describes it as “positive persistence which both establishes the ‘next thing’ and secures the reality of the ‘initial thing’ in the first place. In my own thinking, Kierkegaardian repetition was a useful alternative to other well-known ways of thinking anthropologically about Christian social transformations as either radical rupture or fundamental continuity. 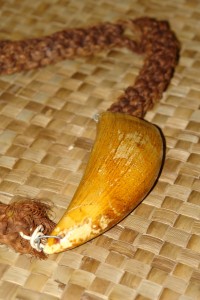 Repetition describes Fijian curses well, because of how they get remade as discursive objects and ritual foci. When a village wants to remove a curse, as often happens, they generally take a whale’s tooth to a leading Methodist Church official to atone and ask for forgiveness. The Church accepts. Theoretically, this should be the end of the matter, but practically, this is not always the case. The curse related to the missionary Thomas Baker shows how curses, rather than being extinguished, gain new life through the discursive and ritual attention they receive.

In 1867, Rev. Baker and seven members of his travelling party were ambushed and murdered in the highlands of Vitilevu, Fiji’s largest island. The village most closely associated with the killing ceremonially apologized to the Church in 1903. In 1977, Fiji’s Catholic archbishop, Petero Mataca, conducted a Mass of Reconciliation at the murder site. Then, in 1985 (the 150th anniversary of the Methodists’ arrival in Fiji) villagers apologized once more, carrying a whale’s tooth and a lit torch to Suva, the nation’s capital and site of the Methodist Church’s headquarters. In 2003, they apologized yet again, this time inviting Baker’s descendents to be part of the ceremony.

There may well be future apologies, because the Baker curse is gaining momentum. Indeed, people outside the land where Baker was killed are now claiming a connection to the curse. In Naitasiri province, people from the Waimaro chiefdom believe their ancestors carried out the actual killing, and that as a result they are now one of the weakest chiefdoms in Fiji whereas before they were one of the strongest (Chris Gregory, personal communication). Because of this, and because the chief who had requested Baker’s murder was from Naitasiri province, a party of seventy marched from the killing site to the Methodists’ theological college at Davuilevu in 2011 for a new ritual apology.

I have sketched this history in a casual style because I want to reorient thinking about curses in the way described above, analyzing curses as an inherent part of the religious fabric, at least in the case of Fijian Methodism; or, to switch metaphors, to think of curses as a soft obbligato rather than a screeching violin solo. I want to detach curses from questions of evil because, among other reasons, the authors of Fijian curses are often considered admirable. If the nation of Fiji is under a curse from God, as Methodist leaders worried, this does not mean that God is evil, nor that Fiji is evil, only that Fiji has made political mistakes such as not formally endorsing Christianity as a state religion. If ancestors curse their living descendants, this does not make the ancestors hated; they are admired for their power even as it threatens to disrupt everything.

Curses are not, I emphasize, normal or everyday things in a comfortable, glad-to-meet-you sense. In fact, the people of highlands Vitilevu—and people in most parts of present-day Fiji—have serious, legitimate concerns about the health, education, and prosperity of their villages, and some (though not all) of the stories associated with curses are horrifying and tragic. My point is that curses can be considered normal and everyday in the sense that they don’t necessarily go away when one conducts the rituals to make them go away.

Having said this, I run the risk of portraying Fijian villages as peculiarly dark places, which would be a highly misleading impression. As any visitor can testify, there is an enormous amount of exuberance, joy, and laughter in daily life in Fiji. Villages are not usually gloomy and villagers are not usually glum. But their Christian beliefs and practices consistently reserve a place for curses, and in thinking about why this is the case, I have come to think of curses as things that are remade rather than removed.

Matt Tomlinson is an ARC Future Fellow in Anthropology in the School of Culture, History and Language at the Australian National University. He has conducted research in Fiji since 1996, and earned his PhD from the University of Pennsylvania in 2002. He is the author of In God’s Image: The Metaculture of Fijian Christianity and Ritual Textuality: Pattern and Motion in Performance, as well as coeditor of The Limits of Meaning (with Matthew Engelke), Flows of Faith (with Lenore Manderson and Wendy Smith), and Christian Politics in Oceania (with Debra McDougall).