The Future of Illusion: Political Theology and Early Modern Texts 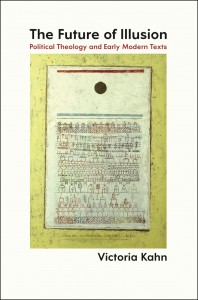 The last decade has witnessed a veritable scholarly obsession with the subject of political theology: a multifaceted concept with varying meanings ranging from theocracy studies to the origins of contemporary political ideas. The reasons behind the turn to political theology are complex, and current scholarly interest in the topic often varies depending on the academic discipline. Yet despite its numerous subfields, the current debate over political theology often hinges on one question: Can liberal democracies function and flourish on secular principles alone or must they make recourse to religious inspiration and language?

Since 9/11, some of the most noted contemporary philosophers and theorists—Charles Taylor, Jürgen Habermas, Giorgio Agamben, and others—have seemingly devoted the bulk of their academic energies to this question. Many of them, often atheists, have highlighted the functional and structural importance of theology for political and social life. Some suggest that Enlightenment reason alone is incapable of cultivating the necessary virtues to sustain the democratic public sphere. Others argue, that “the West” must now make recourse to its Judeo-Christian heritage in order to defend its superiority against irrational belief.

So we now have an ironic situation in which theological discourse in the public sphere is tolerated by certain atheists in the academy—often on the political Left—who are unconvinced that secularism alone can engender and facilitate liberal/democratic cultures. Not only do their critics find this solution unacceptable, but they are also troubled by some of the intellectual influences used to support it. Their aim, in turn, is to overcome political theology by defending secularism’s ability to satisfy modern democratic needs.

It is this backstory that provides much of the motivational context for Victoria Kahn’s impressive new book, The Future of Illusion: Political Theology and Early Modern Texts. Kahn is one of the preeminent scholars associated with the turn to political theology in early modern studies, but her interest in political theology is diametrically opposed to the post-secular attempt to rehabilitate it. She, in fact, calls out Charles Taylor, Giorgio Agamben, Slavoj Zizek, Terry Eagleton, and many others for having given up on the political and cultural sufficiency of secularism. Kahn believes that such misguided pessimism is due to a crucial oversight.

The major aim of Kahn’s work is to tease out the theological and secular motifs of early modern texts, in order to demonstrate their reoccurrence in the present debate over political theology; a path that she believes contemporary critics have neglected to their peril. In this way, Kahn argues that she can overcome the post-secular sympathy for theology by recovering a form of secularism that provides all the necessary resources for making political theology obsolete.

Kahn pursues this by providing an exegetical account of how the most influential twentieth-century analysts of political theology—Carl Schmitt, Leo Strauss, Ernst Kantorowicz, Walter Benjamin—made recourse to the early modern period in developing their arguments on the origins of the theological-political problem. These thinkers, suggests Kahn, pinpointed the key term by which Hobbes, Shakespeare, Machiavelli and Spinoza broke away from legitimating the state on theological grounds: the idea of poiesis.

What Kahn means by poiesis is that religion is a human creation on par with art or poetry. Poiesis, as such, entails a secular anthropology that empowers human beings with the capacity to fashion their own political visions of the world sans theology. This involves something more than just the idea that political theology is really a human fiction. It suggests, more importantly, the human ability to reimagine the ordering of the world.

Kahn spends a significant amount of time answering critics that blame poiesis for modern skepticism and cultural relevatism. Her rejoinders to these claims are compelling, but one could fault the book for not adequately dealing with the charge that poiesis might give way to secular/political religions.

The Future of Illusion demonstrates the exhaustion many scholars are now experiencing with political theology. Moving beyond the religion-versus-rationality distinction, Kahn has perhaps found a way to push the debate forward by interpreting theology and secularism as competing art forms. May the best poetry win, Kahn seems to suggest, and she clearly thinks secularism is the more capable one. In the end, Kahn’s attempt to reorient the debate over political theology offers her readers an illuminating alternative to a subject that, in recent years, has become a bit stale.