An intended absence? Democracy and The Unintended Reformation 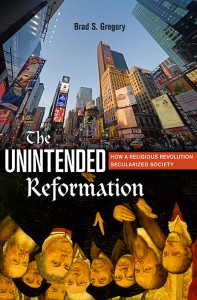 The long-term consequences of the Reformation have been a subject of heated debate for many decades. Most accounts have taken one of two forms. On the one hand, in the wake of Max Weber’s magisterial Protestant Ethic, many historians have wondered about the relationship between Protestantism and capitalist development (R.H. Tawney and E.P. Thompson the most famous among them). On the other hand, many historians, philosophers, and theologians, writing from a Catholic perspective, have seen Martin Luther’s Reformation as the blow that shattered the glorious unity of medieval Christendom. These accounts have an older pedigree, but they reached an apogee in the early decades of the twentieth century, when figures like Georg Moenius, Jacques Maritain, and Henri Massis launched fusillades against the Reformers. Brad Gregory is clearly of the latter camp, and he boldly revives this largely forgotten axis of “modernity critique” (even figures like Alasdair MacIntyre, to whom Gregory owes so much, pay comparatively little attention to the Reformation). In this exhaustive, and exhausting, tome, Gregory seeks to show how the little monk of Wittenberg is behind all of the most disquieting aspects of the modern condition. Although this is largely hidden by Gregory’s immense erudition and soothing style, The Unintended Reformation is a frightening and deeply anti-democratic work, both in its methods and in its findings.

In Gregory’s telling, the medieval Church had spread “a comprehensive, sacramental worldview,” in which ethics, nature, and economics were bound together, as God was not understood to be separate from any part of his creation. Gregory does not provide a naïve image of an effortlessly pious age, but he does hold that the Church was able to institutionalize a “substantive morality of the good,” providing a rock-solid framework in which, while individuals would still sin, they would at least have the intellectual resources to understand their sinfulness and repent for it. This has been the Catholic understanding of the medieval period for many years. In Henri Massis’s Defense of the West (1927), he wrote that, before Luther, the charmed Occident was aware that “all social and political life receives its dignity from the Sovereign Good itself. There is no cleavage between the creature and the Creator, between nature and grace, between justice and charity, between earth and heaven.”

With the Reformation, this land of plenitude began its long collapse into our own decadence. Gregory’s point of attack is subtly different from that of his predecessors. He is not especially concerned with the content of Reformed theology, nor does he harbor any particular grievances about the perfidy of Luther himself (as did earlier generations of Catholic historians). Gregory is most concerned with the Reformation as an epistemological break, ushering in centuries of deep uncertainty about any kind of truth claim whatsoever. The Reformers introduced dissent into medieval Christendom and, by their own logic of sola scriptura, removed the possibility of that dissent being moderated by institutional means. From there, we entered on the slippery slope to hyperpluralism and the “Kingdom of Whatever,” Gregory’s moniker for our current society, whose universities refuse to answer the “Life Questions” and instead encourage citizens to consume their way to happiness. Each chapter traces a particular form of our historical undoing (the secularization of knowledge, the rise of the bureaucratic state, etc.), and each is full of surprising insights and smart observations. They are more or less independent essays, following an iterative logic, as Gregory effectively admits when, in his Conclusion, he notes that he could easily have added more chapters on sexuality, family life, and, presumably, every other aspect of the modern condition that perturbs him.

As may already be clear from this overview, The Unintended Reformation is not a serious work of history, in the traditional sense. It is not, that is, a work that uses primary sources to make an independently verifiable claim about the past, which is what I take to be the disciplinary protocol for the profession of history. No collection of sources, however vast, could ever invalidate the claims being made here. Gregory is not primarily attempting to teach us anything in particular about the last several centuries, but to provide a plausible, historical account to undergird a particular form of Weltschmerz. The reviewer, then, is left in something of a quandary. To discuss a particular chapter or theme would be like attacking the Hydra. Each chapter follows the same format and ends up in the same place, so an in-depth discussion of one of Gregory’s themes would not greatly impact the impression of the whole. Instead, then, of discussing the historical issues in any detail, I will focus on a broader issue: Gregory’s fundamental, if unstated, opposition to democracy.

Gregory claims that we live in the Kingdom of Whatever. We do not, however, live in a kingdom at all. We live in a democracy, made up of people from multiple faith communities. This fact seems curiously irrelevant to Gregory: it is telling that, in a work as long and encyclopedic as The Unintended Reformation, “democracy” is not deemed worthy of a paragraph’s discussion. Indeed, if we understand “democracy” to mean something like “the incorporation of multiple viewpoints into the body politic,” then it can have no place in Gregory’s schema, because it was precisely this incorporation that led to the collapse of medieval unity. He is almost flamboyantly uninterested in the problems inherent in multicultural polities, structured by religious diversity, immigration, and empire. While his intellectual apparatus might differ somewhat from Massis, he is no less committed to an idea of “The West” whose decline he unironically laments throughout the work.

This anti-democratic ethos insinuates itself into Gregory’s intellectual method. As befits a work that is so skeptical of the rough-and-tumble of democratic debate, Gregory does not bother to engage with competing intellectuals in any serious way. This is most glaring when it comes to the discussion of Foucault, Heidegger, and other “postmodern” intellectuals, whose ludicrous beliefs Gregory does not deem worthy of discussion (he suggests that they “read a biology textbook,” a surprising admonition from someone so skeptical of science’s ability to uncover the human essence). Gregory is so convinced of the baselessness of modern philosophy that he feels no need to show his work. Since the Reformation, according to Gregory, we have lacked any coherent way to defend morality. In particular, he declares many times that we have no defensible reason to believe that rape is wrong. Fair enough, but there are two issues here. First, rape is taken far more seriously in Western culture today than it ever was in the Middle Ages, a fact that might give Gregory pause. Secondly, many thinkers have, of course, tried to defend human dignity in secular terms, most notably Kant. While MacIntyre at least gamely tried to refute Kant, Gregory ignores his theories entirely (the same yawning silence greets other relevant thinkers—Blumenberg and Habermas, for instance). Kant is mentioned many times, but in the only extended discussion of him, Gregory merely points out that Kant, like other philosophers, was convinced that he was right, therefore adding to the cacophony of truth claims.

Or consider the work of Jeffrey Stout, a professor of religion at Princeton who in many ways might seem like an excellent interlocutor for Gregory—if he were interested in having interlocutors at all. His Democracy and Tradition is, to my mind, an unparalleled examination of the role of religious belief in a pluralist democracy. He is careful to point out, again and again, that believers should not check their faith at the door, especially as the United States has nourished a unique democratic faith uniting figures like Walt Whitman and Martin Luther King, Jr. While remaining open to religious experience, and religious believers, we must also recognize that “the margin of error in religious matters encompasses very nearly the entire subject,” he writes. In other words, many people disagree about these matters, and we, secularists included, are no less liable to err than others. This pragmatic, humanist position is pilloried by Gregory as “premised on skepticism” and precisely the sort of “hyperpluralism” that is leading “the West” to fail. He explicitly declares that those who believe that “life’s overriding concern is to feel good” are “implicitly do[ing] Jeffrey Stout’s bidding.” Stout has, amazingly, been relegated to the dustbin of aimless, consumerist relativism. This says less about Stout than it does about Gregory, who has, predictably, nothing at all to say about the (Protestant) roots of such phenomena as abolitionism and the civil rights movement.

This is just one example of the tendentious readings that Gregory provides—readings that, to reiterate, are related to Gregory’s imperious intellectual style and his refusal to engage in dialogue. A minor, but telling example, is his use of Jan de Vries’s concept of the “industrious revolution.” In some ways, de Vries’s version of early modern economic history is useful to Gregory, and he makes much of the fact that capitalist development can be pushed back into the period just after the Reformation. However, he takes on board only that aspect of de Vries’s framework which suits his own. The economic and cultural rationale that de Vries himself unearthed are deemed “problematic” because, according to Gregory, he overlooked the true cause of the industrious revolution, as well as its industrial successor: “the disembedding of economics from the ethics of late medieval Christianity’s institutionalized worldview.” The problem with de Vries, in other words, is that the eminent economic historian failed to recognize that the industrious revolution had the same cause as the secularization of the universities, the rise of science, the decline of the family, and the rise of the state. De Vries, that is, failed to recognize that all cows are gray.

This persistent closed-mindedness—the insistence that any and every text and phenomenon be read back into one grand Manichean narrative—is not a problem unique to Gregory: indeed, the work that his resembles more than any other is Jonathan Israel’s Radical Enlightenment, a clarion call for a robust secularity. Both of these books were written by venerable, erudite early modern scholars, convinced that the die of modernity were cast somewhere around 1650. They are both inordinately long—some of the longest nonfiction works published for mass consumption in the last few years. They are both obsessed with Spinoza. And both authors adopt the pose of a Cassandra, howling obvious truths into a world too blinkered by its iPhones to understand. Their great length, and unending cascade of details, stands in for a paucity of theoretical complexity. For both of them, the story itself is extremely simple: in the seventeenth century, there was a grand parting of the ways, and ever since then the children of light have been combating the children of darkness. Israel and Gregory are two sides of the same coin—and stamped on that coin we find the mark of a king.