Ascetic faith in a modern world 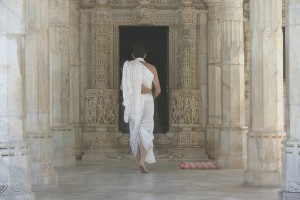 Jainism, a religion from India that emphasizes a disciplined adherence to non-violence, is one of the oldest religions in the world. Modern-day Jains, including those born in the United States, are learning to adapt and reinterpret their faith in a modern world.

Now younger Jains who resist the elaborate rituals of their parents, which include meditating 48 minutes a day and presenting statues of idols with flowers, rice and a saffron-and-sandalwood paste, are trying to reinterpret the traditions of their religion for 21st-century American life.

They are expanding the definition of nonviolence to encompass environmentalism, animal rights and corporate business ethics, flocking to veganism, volunteering alongside other faiths and learning to lobby through political internships and youth groups….

The evolution, which is being examined in a series of conferences at a new center for Jain studies, comes as many Jains who immigrated to the West are grappling with how to mesh the belief in nonviolence, which inspired Mahatma Gandhi and Martin Luther King Jr., with modern life and its excesses.

Read the full article here. At Patheos, Shefali Ajmera explains what it means to be a Jain in the modern world.