CFP: The Religious Turn: Secular and Sacred Engagements in Literature and Theory

The Western Regional Conference on Christianity and Literature will host its annual conference on The Religious Turn: Secular and Sacred Engagement in Literature and Theory at Westmont College in Santa Barbara, CA from May 15-17, 2014. 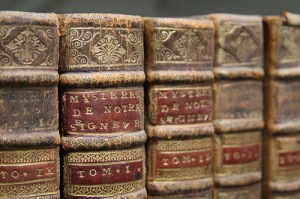 For the past decade or so, the academy has witnessed a turn to religion in literary studies, critical theory, and continental philosophy. Philosophers such as Alain Badiou, Giorgio Agamben, and Slavoj Žižek have initiated a Pauline revival; Radical Orthodox theologians have promoted Christianity as the only alternative to a disenchanted modernity; and various scholars have challenged the Enlightenment’s thesis of inevitable secularization, while revisiting Carl Schmitt’s political theologies of sovereignty and exception. To what extent has the religious turn led to increased interfaith dialogue in literature and theory? How do literary interpretation, biblical exegesis, and historical contextualization respond to these new theological overtures? Can a new epistemology that merges reason and revelation be constructed? How do the secular and the sacred interpenetrate in literature? This conference invites papers that address various literary periods and that consider topics related to secular/sacred intersections, political theology, and interfaith dialogue in literature and theory.

In addition to traditional academic papers, the Conference welcomes undergraduates, poets and fiction writers interested in the theme of the intersections of Christianity and literature to also submit their work. Please see the conference guidelines for submitting abstracts, session proposals, and manuscripts by December 1, 2013.