Essays on Religion in Human Evolution 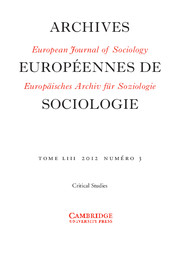 Cambridge University Press is currently offering free access to the three essays in the review symposium on Robert Bellah’s Religion in Human Evolution from the December 2012 issue of the European Journal of Sociology.

Christopher Hann: Humans and their Hierarchies: Cosmological and Sociological

In addition, the issue contains paywalled book reviews by TIF contributors Bryan Turner (on Religion in China by Fenggang Yang) and John Torpey (on The Better Angels of Our Nature by Stephen Pinker).

Explore the full issue here. For more on Religion in Human Evolution, see our series of essays on the book.