The following is excerpted from a chapter in What Matters?: Ethnographies of Value in a Not So Secular Age, a joint publication of the Social Science Research Council and Columbia University Press.—ed. 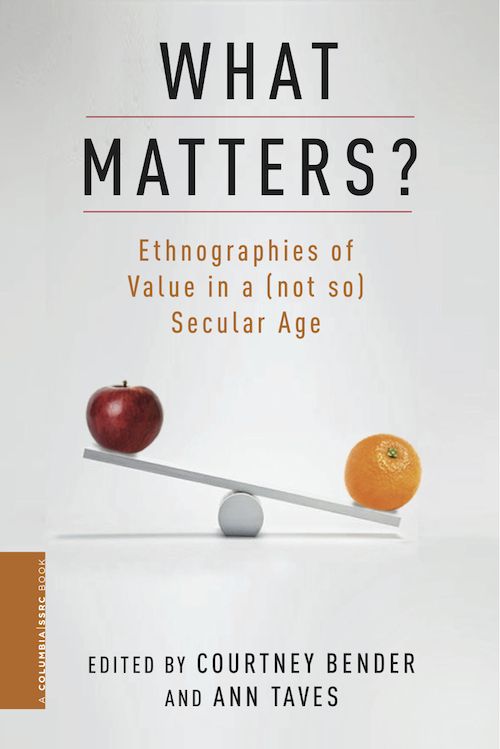 Over the past decade, scholarly inquiry into contemporary religion has moved from an understanding of religion as waning in the face of ongoing secularization toward a focus on the mutual constitution and interaction of religious and secular that underpins both the ideology of secularism and modern religiosity. This has produced pathbreaking research into the dynamics of religious transformation and generated deeper insights into the relation between religion and modernity. Importantly, these insights yield a new theoretical standpoint that transcends secularist ideologies according to which religion is bound to disappear—or at least to retreat into the private sphere—yet at the same time makes these ideologies subject to investigation. The fact that public debates about the so-called resurgence of religion often affirm the fault lines between “religious” and “secular” positions testifies to the fruitfulness of this new standpoint.

However, as outlined by Courtney Bender and Ann Taves in the introduction to this volume, framing our inquiries within the religious-secular binary may cause us to overlook ideas and practices that emerge in relation to this binary and yet are not fully contained by it. This volume calls for a broader framework through which these ideas and practices may come into view. Of key concern here is the puzzling field of spirits and spirituality. Placing emphasis on spirits or spirituality invokes quite different sets of practices and notions of personhood that each require detailed historical and ethnographic study. Still, it makes sense to bring spirits and spirituality together under the banner of the “spiritual,” provided this is not taken as “a resting point” (or as a fixed “third category”), but rather as a “beginning place” for fresh inquiry into the paradoxes and contradictions of the religious-secular-spiritual nexus (see also Bender and Taves, introduction, this volume). Paying attention to the “spiritual,” as the contributions to this volume show, challenges a view of modernity as disenchanted and thus as opposed to past or distant cultures that are “still” enchanted.

Such a view of enchantment as bound to erode with modernity underpins not only the by now much critiqued paradigm of secularization but is also lingering on, albeit less explicitly, in more recent studies. Charles Taylor’s seminal work A Secular Age (2007), which has played a key role in reframing the contemporary study of religion, is a case in point. Taylor has noted that religion in modern societies is subject to transformation rather than simply “vanishing,” or “returning” after a period of repression. In other words—and here Taylor’s perspective resonates with Talal Asad’s position outlined in Formations of the Secular (2003)—secularization and disenchantment transform modern religion instead of abolishing it. Not only does Taylor use secularization and disenchantment interchangeably, thereby linking the privatization of religion to the decrease of spirits, he also suggests a development from belief in spirits, which he associates with premodern, enchanted societies, to a quest for spirituality in the secular, disenchanted age. My reason for invoking Taylor’s work is that it explicates a quite widely shared, yet to some extent problematic, perspective. Seeking to unpack and rethink the relations between secular, religious, and spiritual—the central concern of this volume—this chapter will critically address the association of secularization and disenchantment, and the idea of a progressive transition from a concern with spirits to a concern with spirituality, by bringing in some complicating materials from my long-term anthropological research in Ghana.

In his introduction, Taylor quotes an example from my book Translating the Devil (1999): the case of Celestine who is accompanied by a stranger, who, it turns out, is only visible to her, not to her mother, and whom she later identifies as the Akan spirit Sowlui whose priestess she becomes. Taylor presents this case as a “contemporary example” that illustrates a condition of lived experience in which spirits are still an immediate reality—an experience that has eroded in our modern civilization. Taylor’s interpretation of this case raises intriguing questions. While I certainly agree that in the setting I described the visible, material world is held to be linked with, and manipulated by, the invisible realm of spirits, I have difficulties with a view of contemporary Africa as bearing resemblance to the still enchanted prereformation period (that is, before 1500), for this implies a temporalization of other cultures and, as Johannes Fabian put it, a denial of coevalness. That is why many anthropologists today feel uneasy about invoking contemporary cultural forms as “windows to the past.” Certainly, in the case of Ghana, as will be pointed out in more detail below, we encounter a modern secular state that witnessed, after the turn to democracy and the liberalization and commercialization of the hitherto state-owned media in 1992, the emergence of a heavily pentecostalized public sphere in which much emphasis is placed on spirits. Spirits, it appears, elude confinement to the category of religion and appear in all kinds of settings, including politics, economics, and entertainment. Spirits, in other words, are not just there, as signs of a traditional past, but reproduced under modern conditions.

The point is that we have to explore, in a historical perspective, how African cosmologies of the relation between spirits and the physical world intersect, in complex ways, with the evangelizing work by Western mission societies, the introduction of the modern (colonial) and postcolonial state, and its transformation in our current age. In a somewhat later publication, Taylor himself questions his earlier perspective propounded in A Secular Age and makes some “hesitant comments about developments outside the West, or on a global scale,” asking, “What is the West, after all? What are its limits?” Discussing the globalization of certain Western forms, such as missionary Christianity, he also refers to my historical-ethnographic exploration of missionary affirmations of the existence of a spirit world in Translating the Devil and submits that the Christian reenchantment of old gods may not be simply a “transition phenomenon,” thus questioning his earlier suggestion of a linear move from ancient regime to modernity that entails secularization and disenchantment. He ends his piece with a pertinent question: “Are all regions of the world fated to head towards the predicament of Western modernity, with a disenchanted world, a strong sense of a self-sufficient immanent order, and a staunchly buffered identity?”

I think that recent anthropological work suggests that this question must be answered in the negative, while at the same time we need to take into account the actual spread and impact of Western forms in areas such as Ghana. The key question is how to develop a more encompassing framework for understanding the relation between secular and religious and, by implication, “public religion,” that acknowledges historical and cultural specificity and difference yet, at the same time, accounts for actual Western influences, albeit by “provincializing Europe.” This is the concern of this chapter. Instigated by Taylor’s invocation of the case of Celestine as an instance of a still enchanted world—which he defines as “the world of spirits, demons, and moral forces which our ancestors lived in”—I will probe into the complicated relation between spirits, religion, and the secular. My aim is to show how in the Ghanaian setting we encounter a process that may well be described as secularization (provided we do not mean by this the vanishing of religion, but its reconfiguration in the setting of [post]colonial modernity) and the concomitant constitution of modern religion as a separate category, which, however, intersects with the category of “spirits” and “the spiritual,” and hence enchantment, rather than disenchantment. As I will show, the category of spirits cannot be reduced to a timeless, primordial substratum in African cosmologies, but is subject to being framed and remediated by missions and contemporary Pentecostal media. On the whole, by calling attention to spirits I seek to call into question the association of secularization and disenchantment and to think through the implications of the resilience, and even proliferation, of spirits for our understanding of contemporary religion in a global perspective.