Race and secularism in America

On October 26 and 27, 2012, Vincent Lloyd and Jonathon Kahn will convene a workshop at Syracuse University on “Race and Secularism in America.” From the conference website: 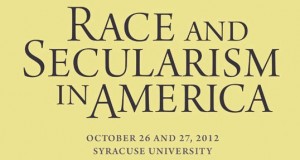 How do religious ideas, present or repressed, contribute to the social formation of race in the United States? How does the existence of racialized communities complicate the self-understanding of the United States as a secular (or Christian) nation? Discussions of religion in America once focused on secularization, the decline of religious participation. But with the evident resilience of religion in both public and private life, scholars have turned their attention to secularism, the ideology that excludes religious ideas and practices from public life. Even if secularization never happened, secularism thrives. But discussions of secularism have rarely been inflected by considerations of race, and discussions of race have rarely taken ambient secularism into account. Does racialization necessarily short-circuit the ideology of secularism, or is racialization in fact necessary to that ideology?

The schedule for the conference is here.