Sage Publishers has announced the launch of Critical Research on Religion: 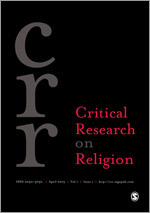 Critical Research on Religion (CRR) is a peer-reviewed, international journal focused on the development of a critical theoretical framework and its application to research on religion. Published three times a year and co-edited by Roland Boer, Research Professor at the University of Newcastle, Australia, Jonathan Boyarin, Leonard and Tobee Kaplan Professor of Modern Jewish Thought at the University of North Carolina, Chapel Hill, and Warren S. Goldstein, Executive Director of the Center for Critical Research on Religion and Visiting Fellow of the Committee on the Study of Religion at Harvard University, the journal seeks to enhance an understanding of how religious institutions and religious thought may simultaneously serve as a source of domination and progressive social change.

CRR seeks to address and understand the role of religion within both its social and political contexts. It provides a platform for those engaging in critical analysis in religious studies and theology as well as the other social sciences and humanities which study religion such as anthropology, sociology, psychology, history, philosophy, and literature.

Read the full announcement here. For further details on the journal and how to submit manuscripts for the inaugural volume, visit the journal site.