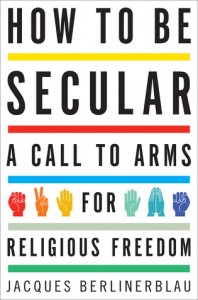 Salon has published an excerpt from a new book, How to Be Secular, where the author, Jacques Berlinerblau, diagnoses problematic connotations that have come to be associated with secularism in the United States and considers competing accounts of the history of the concept:

American secularism has lost control of its identity and image. That’s because the equation secularism = atheism is rapidly gaining market share. It is increasingly employed in popular usage, political analysis, and even scholarly discourse. This formula is muscling out an infinitely more accurate understanding of secularism as a political philosophy about how the state should relate to organized religion. If this association prevails, if secularism simply becomes a synonym for atheism, then secularism in the United States will go out of business.

Which is fine by the Revivalists and which may account for why they perpetuate this confusion. In these circles secularism has become another word for godlessness. As one journalist perceptively observes, “secular” is a “code in conservative Christian circles for ‘atheist’ or even ‘God-hating’ . . . conjur[ing], in a fresh way, all the demons Christian conservatives have been fighting for more than 30 years: liberalism, sexual permissiveness, and moral lassitude.”

Read the full excerpt at Salon.