by Grace Yukich and John-Harmen Valk September 11, 2012
Like
Print 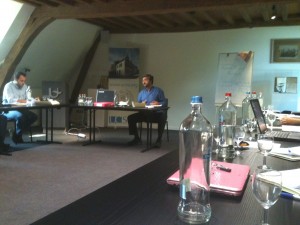 At the end of August, the two of us joined approximately 30 scholars from around the world in Antwerp, Belgium for the 2012 Universitair Centrum Sint-Ignatius Antwerpen (UCSIA) Religion, Culture and Society Summer School. UCSIA annually invites select early-career researchers (doctoral and post-doctoral) and senior scholars for a weeklong program designed to stimulate interdisciplinary and international discussion on a theme, this year’s being “secularism(s) and religion in society.”

Participants in the program represented an array of disciplinary and normative perspectives. Political theorists, nationalism scholars, anthropologists, sociologists, philosophers, political scientists, psychologists, and international relations scholars engaged the lectures given by senior scholars and presented their own work. Variations in focus and methodological approaches inspired richer dialogue and more creative thinking about issues of religion and secularism than is often characteristic of conversations within disciplinary boundaries. Additionally, diversity in normative positions (e.g., religious and non-religious; stricter or more open stances to the position of religion in the public sphere; appropriateness or inappropriateness of mixing normative commitments with research) stimulated reflection on the differences among perspectives represented and the insights that might be gained from others to strengthen individual scholarly engagements.

The disciplinary and normative diversity was matched by the diversity in participants’ national backgrounds (countries represented included Bangladesh, Belgium, Canada, Germany, Greece, Hungary, India, Italy, Kyrgyzstan, Mexico, the Netherlands, the Philippines, Romania, Russia, Slovakia, Turkey, the United Arab Emirates, the United Kingdom, Ukraine, and the USA). The program demonstrated how essential these types of international gatherings are for exploring themes of secularism and religion. Political theorist Rajeev Bhargava, one of the senior scholars, outlined distinctions between various models of secularism and highlighted the Indian variant. Throughout the week, participants pointed to other examples from the diverse national contexts represented, encouraging further discussion of how understandings of secularism might change in light of experiences in countries that receive less scholarly attention, particularly non-Western nations. Sociologist Peggy Levitt, another of the senior scholars, urged participants to adopt a “transnational optic” so as to examine not only how national contexts differ from one another, but also how notions of religion and secularism are shared and transported across national borders. Many prior studies of secularism focus on the level of the nation-state, meaning that a transnational gaze might produce theoretical innovation. The diversity in participants’ national backgrounds made it easier to adopt a transnational gaze during the program; it also revealed the importance of regular engagement with scholars from other parts of the world as well as the need for more venues to create and nurture such relationships.

The diversity represented at the UCSIA summer school might be seen as a microcosm of the diversity within societies more broadly that compels citizens to work together to find suitable ways for managing religious difference and building sound societal institutions. In that regard, then, the character of the UCSIA summer school itself might provide insights for understandings of secularism and religion in society. For one, it suggests that the secular as space might better be seen not as void of religion but as inclusive of it. Bhargava’s notion of principled distance, based on the distinctive nature of Indian secularism, also makes this point. Furthermore, it might suggest that the secular as space is not solely achievable via the secularist outlook (traditionally defined); religious traditions themselves may supply resources—such as the Jesuit emphasis on discernment from which the UCSIA summer school draws inspiration—for the very structuring of the space in which civil discourse and debate amid a diversity of outlooks can proceed. Additionally, if the understanding of the secular as free of religion is neither empirically accurate, philosophically sound, nor normatively desirable, then an understanding of the secular might benefit from a shift in emphasis from the secular as space to other understandings of the secular: say, the secular as a process of discussion or discernment. Secularism might then, in turn, take on very different connotations.

John-Harmen Valk is a PhD candidate in the School of International Relations at the University of St Andrews. His current research focuses on conceptualizations of the religious and the secular and implications for the theorization of the international.