A hard road for an atheist preacher 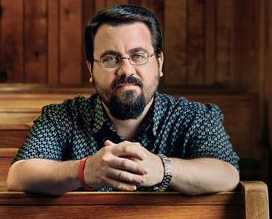 In an article in this past Sunday’s New York Times Magazine, Robert F. Worth writes about the four days he spent with Pentecostal preacher turned itinerant atheist speaker Jerry DeWitt. Near the end of his twenty-five years in the ministry, DeWitt’s doubts about God had become too strong for him to care for his parishioners in good conscience. Turning first to an online support network called the Clergy Project, DeWitt would eventually be outed on social media after attending a talk by Richard Dawkins. Falling away has already cost him his job, his wife, and his home. Worth frames his essay on DeWitt in the context of the growing secularist movement, which has experienced rapid growth over the past few years. DeWitt is now the unpaid executive director of Recovering From Religion, an organization that helps those dealing with the hardships of leaving their faith:

One former pastor named Teresa MacBain told me that when she began doubting her faith last year, she ran through her list of friends and acquaintances and realized that every single one of them was religious. With no one to confide in, she began recording her thoughts into her iPhone when she was alone in the car. “It was a huge encouragement when I finally found other people to talk to online,” she told me. Like DeWitt, MacBain joined the Clergy Project. Then, earlier this year, she resigned from her pastor’s position in Tallahassee and went public as an atheist. She was promptly defriended (in the literal and Facebook sense) by almost everyone she knew. But like DeWitt, she has begun receiving frequent messages from doubting pastors and churchgoers, seeking her help in making the leap away from God. “It’s all new friends now,” she said.

Joseph Blankholm is assistant professor of religious studies at the University of California, Santa Barbara. His research and writing focus on atheism and secularism, primarily in the United States.