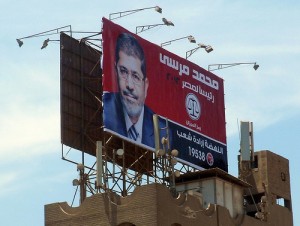 The New York Times reports on the atmosphere in Cairo today, after news of Mohamed Morsi’s victory in the Egyptian presidential race was broadcast. Morsi is a prominent member of the Muslim Brotherhood, and the Times cites wide speculation on what that might mean for the future of Egypt and the surrounding region.

On Monday, Egyptians puzzled over their newly elected leader, whose accidental candidacy thrust him to the center of a tense national debate about citizenship, religion and politics. As president, Mr. Morsi, a symbol of Egypt’s divides, was suddenly responsible for healing them.

“People who voted for Morsi chose him because of the institution he represents, not because of him,” said Nermine Gohar, a 39-year-old homemaker, one of many people — critics and supporters — who felt that the Brotherhood and its candidate were inseparable. “Morsi and the Muslim Brotherhood have earned this. They worked harder and longer than anyone else.”