The season of revolution 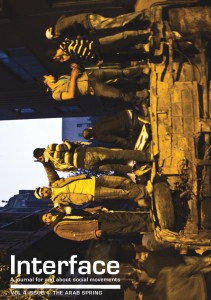 The online journal Interface: A Journal for and about Social Movements dedicates much of its most recent issue to the “Arab Spring.” In their editorial, the editors problematize this label for the recent struggles in North Africa and the Middle East:

Whatever name we assign to the events in the Arab world, we end up trapping ourselves in one limiting or problematic framework or another. The concept of seasons is embedded in a long history of Orientalizing the region, as if what happened in the history of Arab people before 2011 did not qualify for an acknowledgment of the energies, struggles, and fighting for a better life they have been waging against western colonialism, intrusions, and unjust local governments for over 100 years. From Algeria, Egypt, Yemen and Iraq to Palestine, Arab people have been putting up a hard fight for over a century against a western, colonial and neo-colonial, capitalist and racist modernity. But this hardly registers in a western-centric mindset and discourse, nor among many in the Arab world.

Despite the obsession of the West with the Arab world, and despite its claims of superior knowledge, Arab people continue to be “misunderstood,” and/or maligned, and established academic theories continue to fail to explain and/or predict developments in the region. With every failure, a more arrogant wave of theories are generated by the same failing western-centric expertise, replacing or continuing the old paradigms of “knowledge” as if nothing had happened. Failures are evaded, and expertise, analyses, and prescriptions are repeated with the same arrogance.

This pattern is due to at least three interrelated issues: modernity, Orientalism, and Eurocentrism, which have been at work in combination since the ascendance of western modernity to global hegemony, with its assumption that humans are rational and thus can achieve accurate knowledge and be accurately studied.

In addition to interviews, “action notes,” and a reflection by Samir Amin, the issue contains a number of peer-reviewed articles, which are all available to read under the journal’s open-access policy: