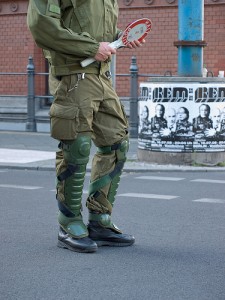 Last Saturday, a regional political rally in the German city of Bonn turned violent as Salafists, followers of a conservative and literalist approach to Islam, fought with police protecting a political demonstration by the right-wing German group, Pro-North Rhine-Westphalia. At Der Spiegel, Charles Hawley characterizes the event as violent retaliation from the Salafists after extended provocation from Pro-NRW, including cartoon caricatures of the Prophet Muhammad. It is important to note that Salafists made up only a fraction of the protestors that showed up to the Pro-NRW rally, which was intended to influence local elections. Hawley writes:

Indeed, the violence of Saturday — coming on the heels of a similar confrontation between Salafists and Pro-NRW last week — would seem exactly what Pro-NRW had been hoping for. The stridently anti-Muslim party has spent years struggling, and failing, to attract the kind of attention comparable right-wing populist parties have achieved in virtually all of Germany’s neighboring countries. Sunday parliamentary elections in the group’s home state have spurned them to once again try to attract votes.