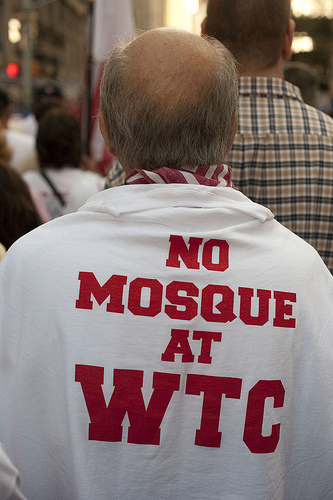 At The Atlantic, Conor Friedersdorf attempts to prove wrong writers, political commentators, and politicians who claim that post-9/11 Islamophobia is a media-conceived, unsubstantiated hoax. Written in response to Jeffrey Tobin’s recent piece for Commentary, in which the author claims that growth of the American Muslim population since 2001 indicates that there must not have been/is not an ongoing post-9/11 backlash against Muslims in the United States, Friedersdorf argues:

I don’t think Muslim Americans should be cowering in their homes or unduly      paranoid. There is, however, more specific evidence that Muslim Americans have faced an observable backlash and discrimination since 9/11.

In communities including Staten Island; Brooklyn; Temecula, Calif.; Murfreesboro, Tenn.; and Lower Manhattan, there have been street protests organized in opposition to permitting Muslims to build mosques. And multiple Republican presidential candidates spoke out against the so-called Ground Zero mosque. Here is a map the ACLU has put together of anti-mosque incidents.

In hate crimes based on religion, Muslims are the second most-victimized group, and every year since 9/11 they’ve been victimized at rates higher than before the attacks. Is that a coincidence?

President Obama is accused by some of his political enemies of being “a secret Muslim,” as if Islamic faith itself is a slur.

“A decade after Sept. 11, 2001, the survey, conducted by the Pew Research Center for the People and the Press, shows that a majority of Muslims say the terrorist attacks made it more difficult to be a Muslim in the United States. Many said that they had been singled out by airport security officers and that people had acted suspicious of them or called them offensive names. But half also said Americans had been friendly toward them, and three-quarters expressed faith that with hard work, they could get ahead.” There is bad news and good news in those numbers. I am not sure why Tobin is so insistent on pretending the bad news isn’t there.