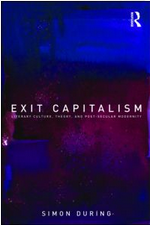 How do we refuse capitalism? Should we? This is Simon During’s central question in his temporally vast and historically deep book…

So, in our current moment where capitalism appears to be a freeway with no viable exit ramps, is During’s question even a viable consideration?

To begin with, During himself isn’t so sure. He writes “much of this book, placed in no-exit indirection, explores, from a literary-historical point of view, certain paths through which we have arrived at where we are now” (vii). And where we are now, for During, is “not at the sanctioned ‘end of history’ but at something like its opposite. Capitalism without hope, hopeless capitalism, endgame capitalism” (vii). Interestingly, and in some ways problematically—at least for this decidedly post-secular reader—During’s strategy for reintroducing hope begins by tracing the “mid-eighteenth-century moment in England when market-oriented culture gradually displaced the old oligarchic order dominated by the Anglican Church” (vii). For During, this shift to market-oriented culture effected a loss of Europe’s historical sociology (3). What results is a text that is hugely disparate in its case studies, yet ultimately compelling and cohesive in its argumentation and central thesis.